When power at a certain voltage is applied to knitted fabric, the resistance of the knit fabric is , and the heat is generated after a certain period of time, dt. Their relationship is expressed with Equation (1):

At the beginning of the heating process, the rate that the fabric is heated is more rapid than the rate that heat dissipates, and therefore the temperature increases quickly. After a certain period of time, when both rates of heating are nearly the same, the temperature of the fabric will reach equilibrium and no longer increase. At this time, it will reach the equilibrium temperature , which is shown by Equations (3) and (4):
The resistance of different structures of conductive fabric is related to ( is the structural coefficient of knitted fabrics with different structures compared to knit fabric), and the resistance is also affected by the temperature. The fabric temperature is affected by the applied voltage U, which is determined by using Equation (5):
Substituting Equation (5) into Equation (4) gives
As a result, the structural coefficient of the fabric and the will influence the accuracy of the predicted steady-state temperature.

Woolen yarn is widely used as a material for heating products due to its good thermal insulation effects. In this experiment, silver-coated yarns, woolen yarn, and polyester yarn were used to knit the conductive fabric. A coarse silver-coated yarn (yarn A) was used for the electrode part, a woolen and fine silver-coated yarn (yarn B) was used for the heating area, and a polyester yarn was used for nonconductive areas. In Figure 1, the SEM micrographs are images of yarn B magnified 1000, 3000, and 5000 times. Information on the specifications of the yarns is listed in Table 1. The electrode, heating area, and nonconductive areas were integrated by using a computer flat-knitting machine that applies intarsia technology.

Samples were prepared with different knitted structures: three types of single-needle-bed knitted structures were numbered S1, S2, and S3 (knit, knit-and-float, and knit-and-tuck stitches), and three types of double-needle-bed knitted structures were numbered S4, S5, and S6 (1 × 1 rib, interlock, and derivative rib stitches). The loop diagrams, simulation effects, and fabric images of each sample are shown in Figure 2a–r, respectively. Three repeated samples of each structure were fabricated on an E12 Computerized flat knitting machine (Longxing, Jiangsu Jinlong Technology Co., Ltd., Changshu, China) (with corresponding knitting parameters listed in Table 2, where the NP value represents the length of the stitch, and the pulling value represents the pulling force of the roller on the fabric during knitting). The sample size was uniform at 10 cm × 10 cm, and the conductive region of the sample was uniform at 2 cm × 2 cm. Images of the samples with six different structures were taken by using a NIKON SMZ745T microscope (Tokyo, Japan) (magnified 30 times). Then, the samples were sealed and stored after being taken off of the machine without any washing treatment.

Experiments were conducted according to the fabric resistance test method (standard AATCC test method 76-1975). The experiment was carried out in a standard environment with a temperature of 20 °C, an atmospheric pressure, and a humidity of 65%.

Resistance measurements of the samples were carried out by using a Keithley 2461 sourcemeter (Cleveland, Ohio, USA), which was interfaced with a computer, as shown in Figure 3. The electrode areas of the samples were covered by two electrode blocks with the same size to observe the changes in resistance values. External voltages of 1, 2, and 3 V were loaded onto the conductive areas through an adjustment of the computer. The resistance value of every sample was recorded on the computer after 60 s. Three samples of every structure were measured at each voltage, and the average value was calculated.

3.5. Experiment 2: Simultaneous Testing of the Resistance and Temperature of Samples

Simultaneous testing of the resistance and temperature was conducted, and the instrument used for testing the temperature was a FLUKE TiS75 infrared camera (Everett, Washington, USA). Samples were placed on an insulating wooden board, and an infrared camera was placed 10 cm above the sample. Rechargeable batteries are usually made of nickel–hydrogen or nickel–chromium with a standard voltage of 1.2 V, and most heating products use portable rechargeable batteries. Considering the possibility of applying conductive samples to heating products, 1.2 and 2.4 V voltages were selected for the experiment for 1 h. Then, the resistance values were recorded by the computer at 1-s intervals. During the first 5 min (at 1, 2, 3, and 5 min) and then at every 5-min interval, the temperature was recorded to observe the variation of temperature with time.

This study, which examined the electrothermal properties of EKCFs with different structures subjected to different voltages, found that even though the electrothermal properties showed trends, they could be very different based on the differences in the knitted structure. Generally, the following conclusions are made:
(1) When power passed through the EKCFs, the resistance increased for a short period of time and then gradually decreased. The resistance increased a little in the first few seconds of the experiment, decreased fast within 1000 s, and then decreased slowly during the rest time. The temperature gradually increased in the first 1000 s and tended toward stability after a certain period of time;
(2) The factors affecting the electrical resistance of EKCFs were mainly related to the length resistance of the yarn and the contact resistance between the yarns. If the applied voltage was higher, the temperature increased, but an increase in temperature reduced the length resistance and contact resistance of the EKCFs. In terms of the experiments, S4 with a voltage of 2.4 V was most suitable for wearable conductive fabrics;
(3) Finally, the structural coefficient between different knitted structures and the thermal properties of different EKCFs subjected to different voltages were analyzed, and the findings can be used for further research work on thermal fabrics for wearable textiles.

L.H. and S.L. conceived and designed the structures of electrical knitted conductive fabrics (EKCFs). S.L. administrated the project and provided the mythology. S.K. conducted experiment, fabricated and provided EKCFs, and analyzed data. S.K. and S.L. wrote the manuscript and revised the manuscript. And all authors gave approval to the final version of the manuscript.

This research was funded by Shanghai Pujiang Program (NO. 18S10157) and the Fundamental Research Funds for the Central Universities (NO. 18D110112). And we would also like to thank Dr. Liu Yanping and Hui Zhang for their kind help on testing devices.

The authors would like to acknowledge funding support from the Shanghai Pujiang Program (NO. 18S10157), China, and the Fundamental Research Funds for the Central Universities (No. 18D110112), China, for the work reported here. We would also like to thank Liu Yanping and Hui Zhang for their kind help in testing the devices. 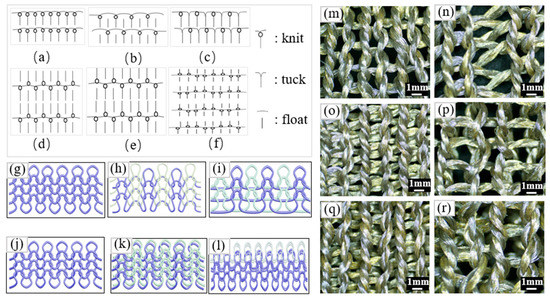 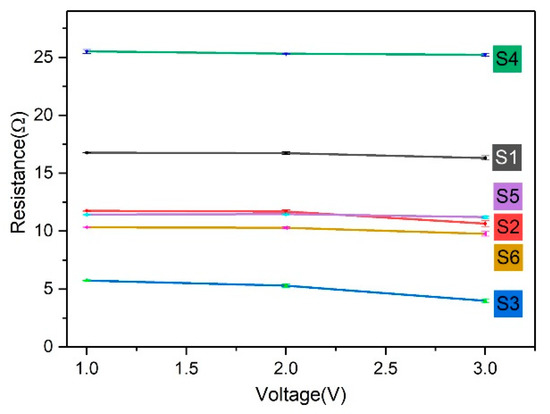 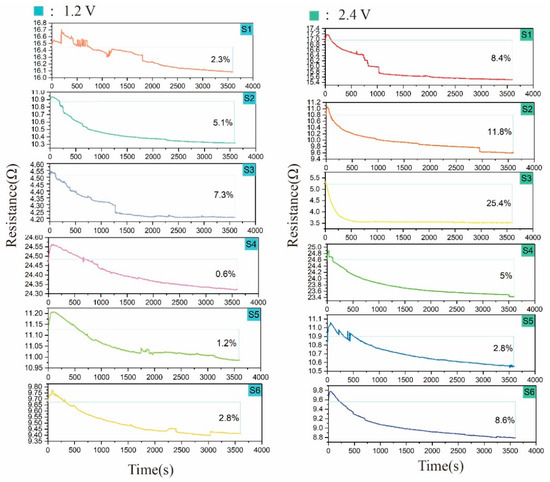 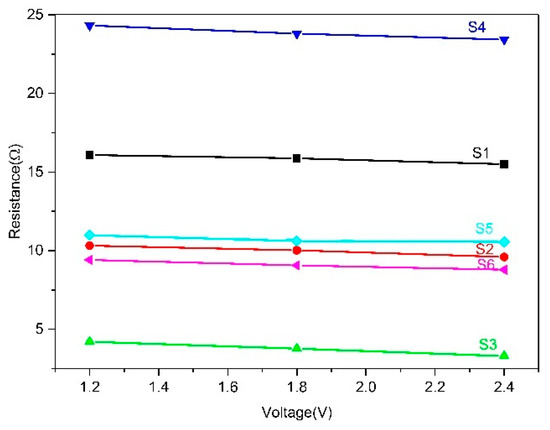 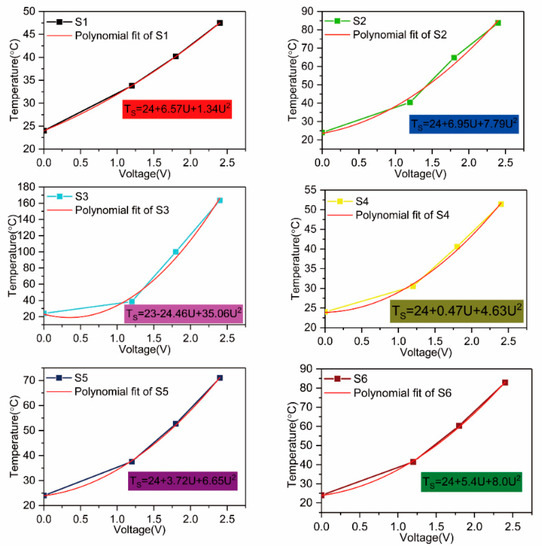