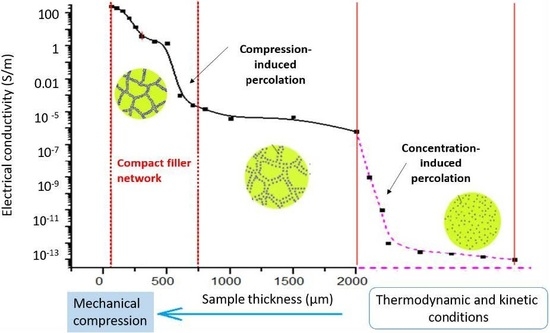 A conical twin-screw compounder of HAAKE MiniLab combined with a specifically designed hot embossing device was used for preparation of the PDMS composites in order to realize a spatially confined forced assembly network (SCFNA) of conductive fillers.
For PDMS/SCF composites, the PDMS was mixed with the short carbon fibers at weight ratios of 0.5, 1, 1.5, 2, 3, 4, 6, or 8 wt % at 25 °C with a rotational speed of 70 rpm for 10 min. For the preparation of PDMS composites containing hybrid micro- and nano-scale fillers, 1 wt % of CNT, G, or CCB was included to the above PDMS/SCF compound with a rotational speed of 50 rpm for an additional 10 min at 25 °C to obtain PDMS/SCF-CNT, PDMS/SCF-G, or PDMS/SCF-CCB composites.
The experimental hot embossing device as shown in Scheme 1a provided a pressing force up to 10 MPa with a pressing speed of 0.005 to 0.5 mm/s in a working stroke. The servo motor of this embossing device was accurately controlled by a programmable logic controller (PLC) system and the position accuracy of ±3 μm for the up platen was guaranteed. The compressing mold was made of two flat plates with electrical heaters. The temperature of the molds was controlled from ambient temperature to 350 °C with a control accuracy of ±1 °C and heating rate of 15 °C/min. The effective working area was 210 mm × 300 mm.
The compounded materials were compressed in the designed mold at 20 °C following the steps shown in Scheme 1b. The compounds were compressed from an original thickness of 10 to 1.0 mm within 120 s and kept at 10 MPa for 5 min to initiate the first assembly of the filler network. Then the composite sheets were continuously compressed to the thickness of 0.4, 0.3, 0.2, and 0.1 mm, respectively within 30 s. The second compression aims to force the assembly of the filler network in a spatially confined space. In this work, when the sample thickness (H) was reduced below a critical network thickness (dm = 0.3 mm), the conductivity was significantly enhanced. Finally, the composite sheets were cured at 100 °C for 10 min to stabilize the filler network. The specimens with a thickness of 1.0 mm after the first stage of compression were used as a control.

A video measuring system JTVMS-1510T manufactured by Dongguan JATEN Precision Instrument Co., LTD. (Dongguan, China) was used to investigate the morphology evolution process during the preparation of the compact short carbon fiber network in the PDMS matrix. A Hitachi S4700 scanning electron microscopy (SEM, Tokyo, Japan) was used to study the dispersion and localization of the fillers in the composites under an accelerating voltage of 30 kV.
The electrical conductivity of the composite samples was measured using a Keithley 4200-SCS (Cleveland, OH, USA) with a standard four-probe method and a ZC-90D resistivity meter from Shanghai Taiou Electronics (Shanghai, China). All electrical conductivity measurements were carried out at ambient conditions.
The mechanical properties of the PDMS composites were evaluated using a universal material-testing machine (UTM-1422, Chengde Jinjian Testing Instrument Co., Ltd., Chengde, China) with a cross-head speed of 5 mm/min at ambient temperature and the corresponding dimension of the specimen is 30 mm × 15 mm × 0.2 mm.

3.3. Characterization of the Conducting Filler Network in PDMS

The mechanical properties of PDMS composites with SCF (0–8 wt %), and 1 wt % of a nano-sized filler (CNT, CCB, and G) are shown in Table 2—the sample thickness is 0.2 mm. The maximum tensile strength of PDMS/SCF composites decreased from 4.5 ± 0.1 MPa to 2.4 ± 0.1 MPa when the SCF content increased from 0 to 8 wt %. The reduced properties can be ascribed to the higher contents of micro-SCF and the poor interfacial interaction between SCF and PDMS. After addition of 1 wt % nanofillers into PDMS/SCF (4 wt %) composites, the tensile strength and elongation at break of the composites were enhanced. Graphene showed a better mechanical reinforcement effect than CNT and CCB. With the addition of 1 wt % graphene, the maximum tensile strength of PDMS/SCF composites improved from 2.8 ± 0.1 MPa to 3.8 ± 0.2 MPa. The two-dimensional graphene nanosheets offer a stronger interface layer with PDMS as compared to one-dimensional CNT or granular CCB, and the graphene is mainly located in the PDMS rich regions of the composites, which would be effective in reinforcement of PDMS. Meanwhile, graphene presents a folded morphological distribution in PDMS as shown in Figure 5c, which would benefit the enhancement of the tensile strength and elongation at break. Nevertheless, both the CNT and CCB improved the tensile strength of PDMS/SCF composites, because the nanosized CNT and CCB interact with the PDMS matrix stronger than the microsized SCF. Figure 7 shows the tensile curve of PDMS/SCF (8 wt %) and PDMS/SCF (8 wt %)-CNT (1 wt %) samples.

The incorporation of conducting fillers into an insulating polymer matrix can generally enhance the electrical conductivity to a limited extent when beyond the percolation threshold. In this work, a spatially confined forced network combined with a hybrid micro-nanoscale filler approach were investigated in order to prompt highly electrical conductive polymer composites. With our newly-designed spatially confined forced network (SCFNA) process, the electrical conductivity of PDMS/short carbon fiber (SCF) composites was increased by 7.8 times in comparison to the traditional compounding method. The addition of a nano-scale filler, such as CCB or CNT, further increased the conductivity over 2 times higher at above the percolation threshold of SCF; this was a result of a synergy effect of the hierarchical filler network. The spatially confined forced network provides a simple route to construct a continuous and compact conducting filler network in PDMS/SCF composites and results in super high electrical conductivity yet mechanical flexible composites with lower filler concentrations. This approach will significantly prompt the applications of conductive polymer composites in the areas of flexible sensors and intelligent wearable products.

This work was supported by the National Nature Science Foundation of China (Grant No.51673020) and by the Fundamental Research Funds for the Central Universities (Grant No.ZY1812, JD1810). 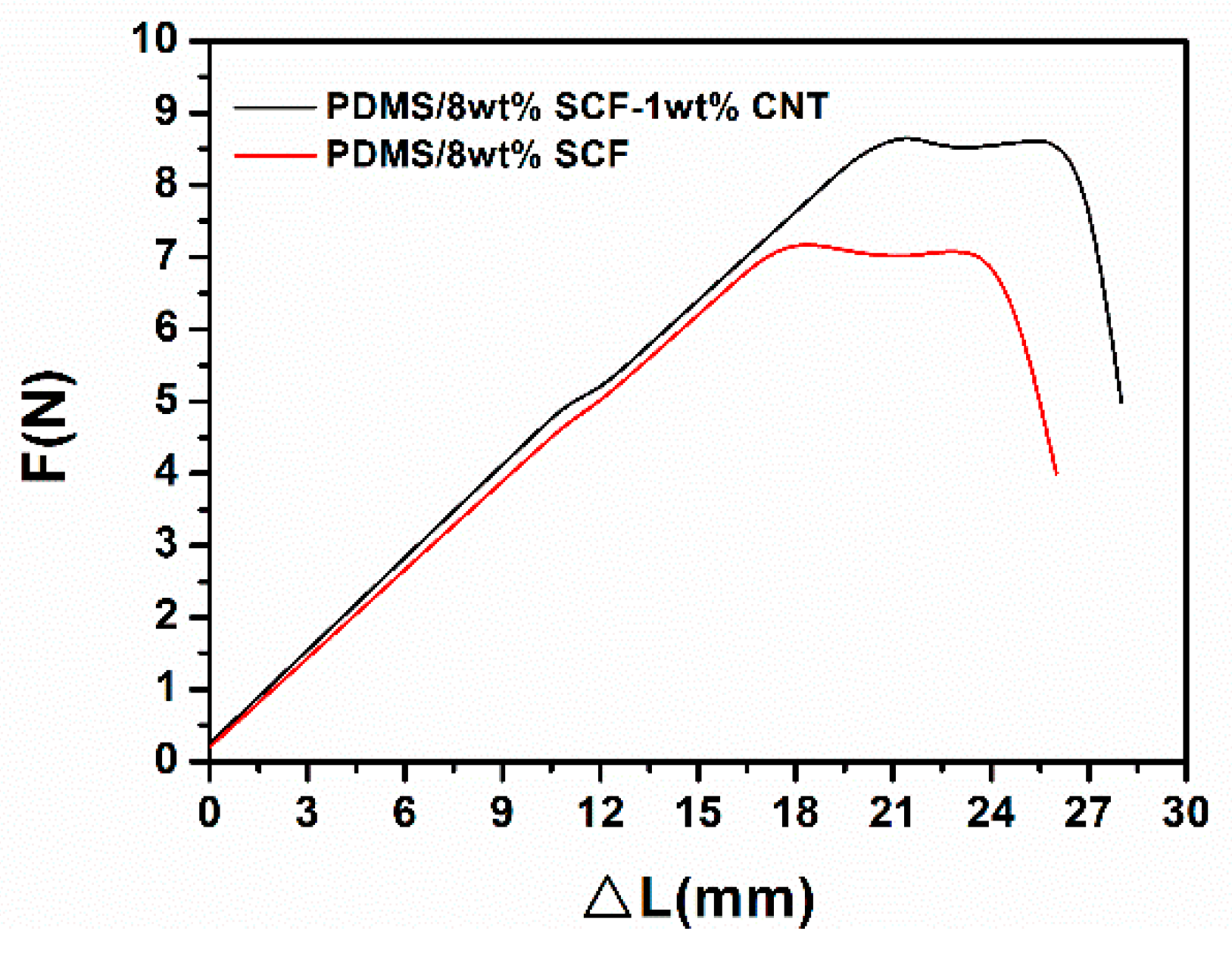