Adsorption Separation of Analgesic Pharmaceuticals from Ultrapure and Waste Water: Batch Studies Using a Polymeric Resin and an Activated Carbon
Next Article in Special Issue

Excessive levels of plastic waste in our oceans and landfills indicate that there is an abundance of potential carbon sources with huge economic value being neglected. These waste plastics, through biological fermentation, could offer alternatives to traditional petrol-based plastics. Polyhydroxyalkanoates (PHAs) are a group of plastics produced by some strains of bacteria that could be part of a new generation of polyester materials that are biodegradable, biocompatible, and, most importantly, non-toxic if discarded. This study introduces the use of prodegraded high impact and general polystyrene (PS0). Polystyrene is commonly used in disposable cutlery, CD cases, trays, and packaging. Despite these applications, some forms of polystyrene PS remain financially and environmentally expensive to send to landfills. The prodegraded PS0 waste plastics used were broken down at varied high temperatures while exposed to ozone. These variables produced PS flakes (PS1–3) and a powder (PS4) with individual acid numbers. Consequently, after fermentation, different PHAs and amounts of biomass were produced. The bacterial strain, Cupriavidus necator H16, was selected for this study due to its well-documented genetic profile, stability, robustness, and ability to produce PHAs at relatively low temperatures. The accumulation of PHAs varied from 39% for prodegraded PS0 in nitrogen rich media to 48% (w/w) of dry biomass with the treated PS. The polymers extracted from biomass were analyzed using nuclear magnetic resonance (NMR) and electrospray ionization tandem mass spectrometry (ESI-MS/MS) to assess their molecular structure and properties. In conclusion, the PS0–3 specimens were shown to be the most promising carbon sources for PHA biosynthesis; with 3-hydroxybutyrate and up to 12 mol % of 3-hydroxyvalerate and 3-hydroxyhexanoate co-monomeric units generated. View Full-Text
Keywords: polyhydroxyalkanoates (PHAs); polystyrene (PS); prodegraded; Cupriavidus necator; fermentation; mass spectrometry; bioplastics; recycling polyhydroxyalkanoates (PHAs); polystyrene (PS); prodegraded; Cupriavidus necator; fermentation; mass spectrometry; bioplastics; recycling
►▼ Show Figures 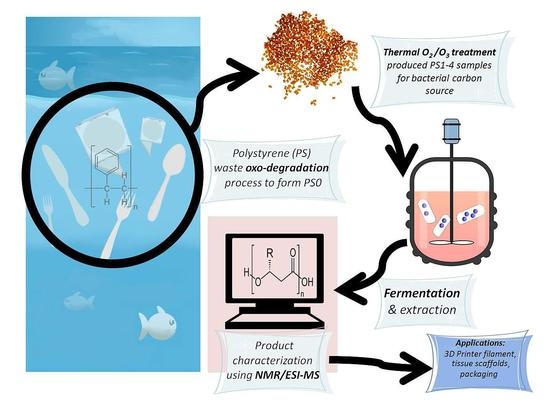