Mechanism of Yellowing: Carbonyl Formation during Hygrothermal Aging in a Common Amine Epoxy

Epoxies are often exposed to water due to rain and humid air environments. Epoxy yellows during its service time under these conditions, even when protected from UV radiation. The material’s color is not regained upon redrying, indicating irreversible aging mechanisms. Understanding what causes a discoloration is of importance for applications where the visual aspect of the material is significant. In this work, irreversible aging mechanisms and the cause of yellowing were identified. Experiments were performed using a combination of FT-NIR, ATR-FT-IR, EDX, HR-ICP-MS, pH measurements, optical microscopy, SEM, and DMTA. Such extensive material characterization and structured logic of investigation, provided the necessary evidence to investigate the long-term changes. No chain scission (hydrolysis or oxidation-induced) was present in the studied common DGEBA/HDDGE/IPDA/POPA epoxy, whilst it was found that thermo-oxidation and leaching occurred. Thermo-oxidation involved evolution of carbonyl groups in the polymeric carbon–carbon backbone, via nucleophilic radical attack and minor crosslinking of the HDDGE segments. Four probable reactive sites were identified, and respective reactions were proposed. Compounds involved in leaching were identified to be epichlorohydrin and inorganic impurities but were found to be unrelated to yellowing. Carbonyl formation in the epoxy backbone due to thermo-oxidation was the cause for the yellowing of the material. View Full-Text
Keywords: epoxy; yellowing; mechanism; thermo-oxidation; carbonyl formation; leaching epoxy; yellowing; mechanism; thermo-oxidation; carbonyl formation; leaching
►▼ Show Figures 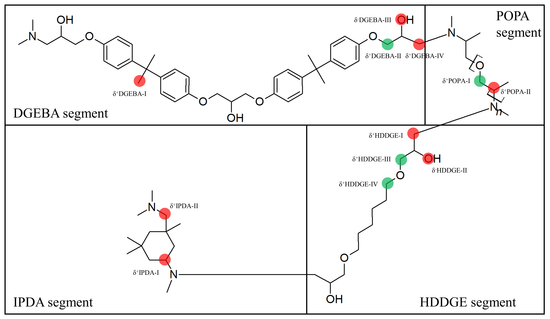