Functional surface active monomers (surfmers) are molecules that combine the functionalities of surface activity, polymerizability, and reactive groups. This study presents an improved pathway for the synthesis of the active ester containing surfmer p-(11-acrylamido)undecanoyloxyphenyl dimethylsulfonium methyl sulfate (AUPDS). Further, the preparation of poly(methyl methacrylate) and polystyrene nanoparticles (NPs) by mini-emulsion polymerization using AUPDS is investigated, leading to NPs with active ester groups on their surface. By systematically varying reaction parameters and reagent concentrations, it was found that AUPDS feed concentrations between 2–4 mol% yielded narrowly distributed and stable spherical particles with average sizes between 83 and 134 nm for non-cross-linked NPs, and up to 163 nm for cross-linked NPs. By basic hydrolysis of the active ester groups in aqueous dispersion, the positive ζ-potential (ZP) was converted into a negative ZP and charge quantities determined by polyelectrolyte titrations before and after hydrolysis were in the same range, indicating that the active ester groups were indeed accessible in aqueous suspension. Increasing cross-linker amounts over 10 mol% also led to a decrease of ZP of NPs, probably due to internalization of the AUPDS during polymerization. In conclusion, by using optimized reaction conditions, it is possible to prepare active ester functionalized NPs in one stage using AUPDS as a surfmer in mini-emulsion polymerization. View Full-Text
Keywords: mini-emulsion polymerization; functional surface active monomer; polyelectrolyte titration; dynamic light scattering mini-emulsion polymerization; functional surface active monomer; polyelectrolyte titration; dynamic light scattering
►▼ Show Figures 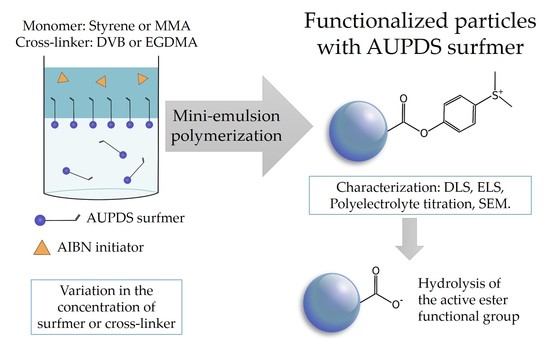