Effects of Electron Beam Irradiation on the Mechanical, Thermal, and Surface Properties of Some EPDM/Butyl Rubber Composites
Previous Article in Journal

Effects of Nano-CaCO3 Content on the Crystallization, Mechanical Properties, and Cell Structure of PP Nanocomposites in Microcellular Injection Molding

We report on Flory–Huggins photonic sensors for the selective detection of volatile organic compounds without the use of any chemical functionalization. For this purpose, we employed periodic multilayers made of inert cellulose acetate alternated to active polystyrene films whose free volume was modified with silanized ZnO nanoparticles. The simple UV-visible (UV-vis) dynamic optical response of such polymer distributed Bragg reflectors during exposure to vapors of benzene, toluene, o-dichlorobenzene, and carbon tetrachloride allows their detection and recognition based on different chemico–physical affinity with the active polymer medium.
Keywords: photonic crystals sensors; polymers; distributed Bragg reflectors; Flory–Huggins; nanoparticles photonic crystals sensors; polymers; distributed Bragg reflectors; Flory–Huggins; nanoparticles

The increasing production and consumption of goods is releasing harmful chemicals into atmosphere, water sources, and soil. Among these pollutants, volatile organic compounds (VOCs) pose serious environmental harm and concern to the human body. Table 1 provides a classification of common VOCs based on their effect on the human body. The list shows that, among others, commonly used solvents such as acetone can cause neurological damages, and that tetrachloroethylene, frequently used for dry cleaning, is a suspected carcinogenic agent [1,2]. Among other effects, indoor VOC pollution causes sick building syndrome [3], leading to eye and pulmonary irritation, headaches, loss of coordination, and nausea [4]. In the long-term, this exposure can damage the liver, kidneys, and central nervous system. VOC poisoning is also linked to the development of cancer [5]. Moreover, these pollutants contribute to the formation of the tropospheric ozone, a greenhouse gas, by reaction with oxygen sources such as nitrogen oxides and carbon monoxide [6]. The tropospheric ozone is contributing to global warming [7] and is a powerful oxidizing agent that causes respiratory illness [8], and can react with other chemicals to form new toxic pollutants [9]. VOCs are released by many industrial processes such as oil refineries, power plants, and chemical manufactures, and in urban areas by automotive vehicles, painting works, dry cleaning, refrigerators, wood burning, and photocopy machines [3,4,10]. The high level of toxicity and the wide spreading of these compounds make their identification and extensive monitoring in living and working environments critical to preserve people’s health and to identify proper treatments in the case of poisoning. Quantitative monitoring is commonly performed by portable detectors such as colorimetric tubes, metal oxide, and infrared sensors, which are very sensitive but lack of selectivity [11,12,13]. Qualitative assessment requires instead time-consuming sampling, chromatography, and detection using two or more detectors combined together [14]. These characteristics make the label-free photonic sensors described here a promising alternative [15,16].
Recently, photonic sensors based on the Flory–Huggins interaction parameter between analytes and all-polymer distributed Bragg reflectors (DBRs) entered in the spotlight for the development of label-free colorimetric sensors capable of broad selectivity among a large amount of analytes and that do not require specific chemical functionalization [17,18,19,20]. In these systems, DBRs made of alternated layers of two polymers with different refractive index [21] play as dense membranes for the intercalation of the analytes interacting selectively with them, thus allowing detection of any kind of permeating chemical species through the simple estimation of the Flory–Huggins parameter (χ). Moreover, thanks to low fabrication costs, ease of integration in lab-on-a-chip devices and of large area production using established technologies used in the food packaging industries [22,23,24,25,26,27], these DBR sensors are very promising for the development of safety devices and quali-quantitative detection systems.
In detail, the interaction between light and DBRs provide a typical optical response recognizable as a strong peak in their reflectance spectrum, also known as photonic band-gap (PBG) [28,29,30,31]. Such a peak arises from the coherent diffraction of incident light beams occurring at all the interfaces within the multilayer. The PBG can then be compared to the X-ray diffraction peaks arising from crystalline materials. Indeed, as the variation of lattice parameters in a crystal affects its diffraction pattern, variation in periodicity and refractive index of a DBR affects its reflectance spectrum. Then, when an analyte intercalates within the multilayer, swelling or shrinking the polymer chains, the photonic lattice, and in turn its spectrum, are modified. In sensing, the different chemico–physical affinity between analytes and polymers induces different intercalation kinetics, followed by the dynamic evolution of the DBR optical response. Indeed, the intercalation kinetics are strictly related to the polymer–analytes solubility, and then to the Flory–Huggins parameter for the couples [17], which has successfully been used to describe selectivity in polymer DBRs made by the alternated layer of a block-copolymer and poly(vinyl alcohol) [20]. This allows recognition of the analyte and its concentration [15]. Such systems have been proven to be sensitive to a variety of analytes including toluene [15], water [32], alcohols, and even perfluorinated compounds [17,33].
In a previous work, we demonstrated that DBRs containing phase changing polymers, which form a semicrystalline clathrate with different optical properties through analyte intercalation, allow label free selectivity among carbon tetrachloride (CTC), benzene (BEN), toluene (TOL), and 1,2-dichlorobenzene (o-DCB) [16]. In such a case, the selectivity was achieved by exploiting the different kinetic of crystallization of the active polymer when exposed to the analytes, and the specific porosity imprinted by the desorbed analytes within the active sensing medium. In this work, we show that the dynamic optical response of the DBR also allows the use of amorphous commodity polymers to recognize these VOCs. To this end, we used cellulose acetate (CA, n = 1.46) as low index and inert medium and a polystyrene (PS) nanocomposite doped with ZnO nanoparticles ([email protected], n = 1.59 [15]) as high refractive index and active sensing medium to detect and recognize TOL, BEN, o-DCB, and CTC. Indeed, CA has large free volume and permeability to gas and vapors, and its Flory–Huggins parameter ranges from 1.2 to 2.1 for the four analytes (Table 2), making it a an appropriate inert medium [15]. Conversely, PS permeability is usually low, but its Flory–Huggins parameter is usually very small for the chemical species under consideration, making it well suitable as active medium (Table 2). To increase its permeability, we doped the dense matrix with silanized nanoparticles to introduce modification in the polymer configuration at the ZnO–polystyrene interface [15]. This approach grants an increase of the polymer free-volume and then of the vapor permeability, allowing sensitivity below the part per million (ppm) and lower detection limit of ~20 ppm to toluene vapors [15]. This also allows faster response than those reported for bare polymer DBRs [15,17,20], but while maintaining the high processability typical of amorphous polymers, which is a key factor for scaled-up fabrications. Indeed, DBRs made of amorphous commodity polymers are currently the only photonic structure availing of industrial fabrication techniques [34]. This aspect, together with their colorimetric optical response, makes these systems interesting disposable sensors for air pollutants in industrial areas, as well as integrable transductors for detection of degradation by-products in goods packaging.

Synthesis and functionalization of ZnO nanoparticles (NPs): ZnONPs synthesis and silanization was run accordingly to previous reports [15,35]. The particles were synthetized via a solvothermal route from zinc acetate dihydrate and potassium hydroxide: 0.07 mol of zinc acetate were dissolved in methanol and heated at 63 °C under sonication. Once this temperature was reached, 0.14 mol of KOH was dissolved in the same solvent and slowly added to acetate solution. After 3 h of reaction under sonication, the particles were purified by five cycles of decantation and washing with methanol, and finally dried [36]. To avoid aggregation, dimethyl-(methoxy) octadecylsilane (DMMOS) was grafted onto their surface: 10 g of NPs was dispersed methanol and sonicated. Then, 70 mL of dichloromethane containing 2.5 g of DMMOS was added to the NP. The new dispersion was sonicated until complete evaporation and dried in a vacuum for 2 h. The graft reaction was then run at 135 °C under nitrogen flux for 2 h.
Active polymer and DBR preparation: after silanization, the ZnONPs were dispersed into a toluene-polystyrene (MW = 200,000) solution and stirred. The new dispersion was used to grow DBRs alternating it to cellulose acetate (MW = 61,000) dissolved in 4-hydroxy-4-methylpentan-2-one (diacetone alcohol, DA). The polymer concentrations were 3% and 4% (w/v) for PS and CA, respectively. The rotation speed was 160 rounds per second.
For all the DBR samples, reflectance data were collected with home-made setups based on optical fiber using a Y-fiber probe and an Avantes (Apeldoorn, The Netherlands) AvaSpec-2048 spectrometer (200−1150 nm, resolution 1.4 nm). The light source was a combined deuterium–halogen Micropak DH2000BAL (Ocean Optics, Largo, FL, USA).
Sensing measurements were performed as previously described [15] at 20 °C and 1 atm with the optical set-up described above using a dip-probe Y-fiber (FDP-7UVIR200-2-yy, Avantes, Apeldoorn, The Netherlands) where the sample was placed. The probe was then inserted and sealed in a glass tube where 500 µL of liquid analyte were previously placed to saturate the air environment. The distance between the sample and the liquid surface was kept at about 3 cm. The partial pressure for the four vapors in the given condition was calculated as follows: [37] carbon tetrachloride 11.95 kPa, benzene 10.5 kPa, 1,2-dichlorobenzene 0.13 kPa, and toluene 2.8 kPa (Table 2).

This work demonstrates DBR sensors made of commodity polymers with high optical responsivity and selectivity to benzene, toluene, 1,2-dichlorobenzene, and carbon tetrachloride vapor exposure. The sensitivity to vapor was achieved by increasing the overall DBR permeability using a polystyrene–ZnO nanocomposite, while selectivity is achieved by analyzing the dynamic optical response of the sensors, which is affected by the different chemico–physical affinity between the active sensing polymer in the DBRs and the four VOCs. Together with the possibility to fabricate polymer DBR sensors on the square-meters area, these results pave the path to new low-cost disposable devices for safety purposes to be employed in indoor and outdoor industrial environments. 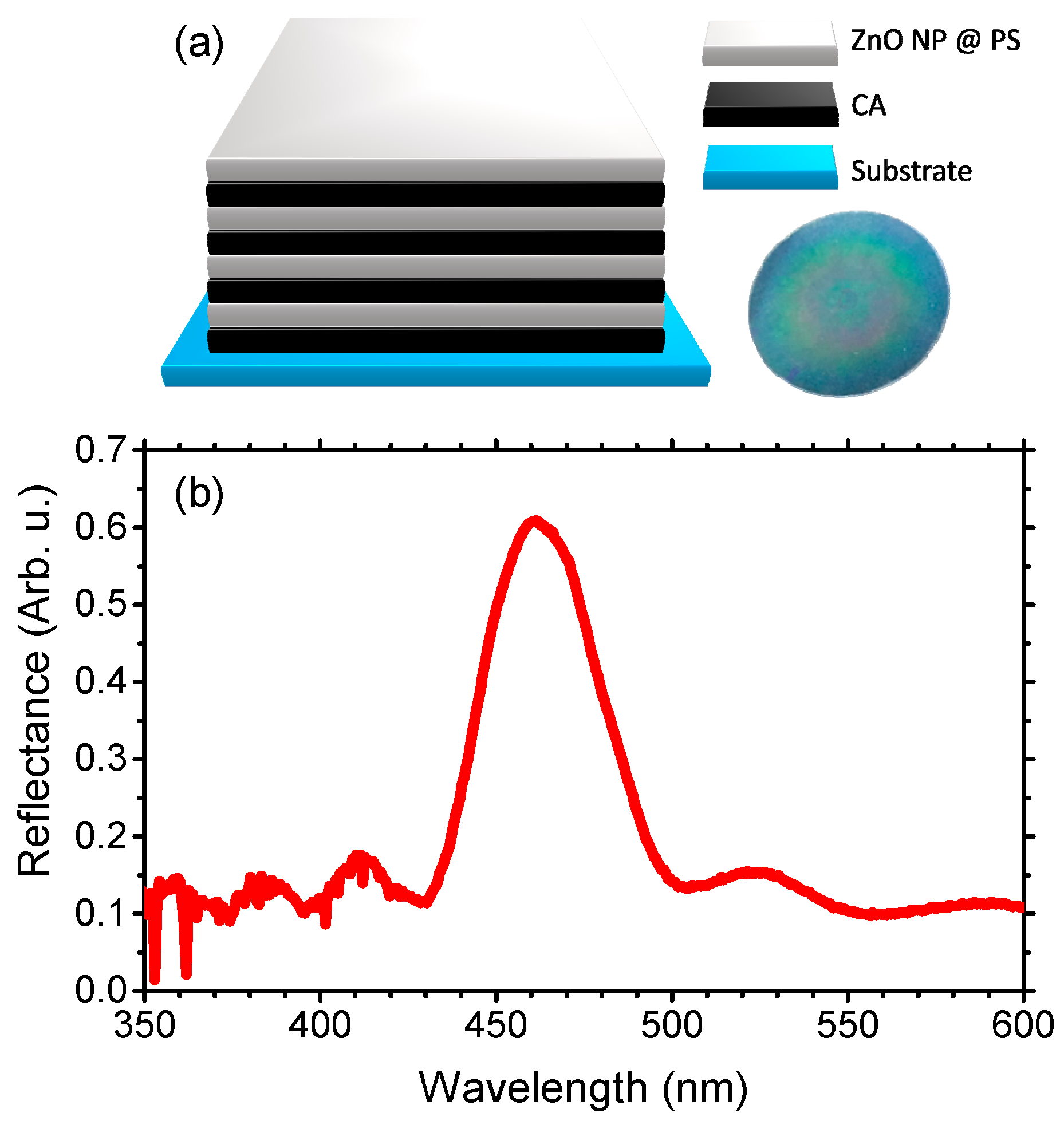