A flexible peptide chain displays structural and dynamic properties that correspond to its folding and biological activity. These properties are mirrored in intrachain site-to-site distances and diffusion coefficients of mutual site-to-site motion. Both distance distribution and diffusion determine the extent of Förster resonance energy transfer (FRET) between two sites labeled with a FRET donor and acceptor. The relatively large Förster radii of traditional FRET methods (R0 > 20 Å) lead to a fairly low contribution of diffusion. We introduced short-distance FRET (sdFRET) where Dbo, an asparagine residue conjugated to 2,3-diazabicyclo[2.2.2]octane, acts as acceptor paired with donors, such as naphtylalanine (NAla), tryptophan, 5-l-fluorotryptophan, or tyrosine. The Förster radii are always close to 10 Å, which makes sdFRET highly sensitive to diffusional motion. We recently found indications that the FRET enhancement caused by diffusion depends symmetrically on the product of the radiative fluorescence lifetime of the donor and the diffusion coefficient. In this study, we varied this product by two orders of magnitude, using both donors of different lifetime, NAla and FTrp, as well as a varying viscogen concentration, to corroborate this statement. We demonstrate the consequences of this relationship in evaluating the impact of viscogenic coadditives on peptide dimensions. View Full-Text
Keywords: short-distance FRET; diffusion; radiative fluorescence lifetime; viscosity; chain dynamics; peptide structure short-distance FRET; diffusion; radiative fluorescence lifetime; viscosity; chain dynamics; peptide structure
►▼ Show Figures 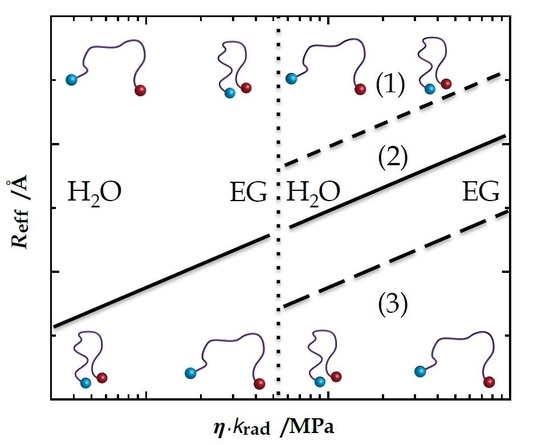