We present a study of the magnetic-field effect on spin correlations in the charge ordered triangular Ising system LuFe2O4+δ through single crystal neutron diffraction. In the absence of a magnetic field, the strong diffuse neutron scattering observed below the Neel temperature (TN = 240 K) indicates that LuFe2O4+δ shows short-range, two-dimensional (2D) correlations in the FeO5 triangular layers, characterized by the development of a magnetic scattering rod along the 1/3 1/3 L direction, persisting down to 5 K. We also found that on top of the 2D correlations, a long range ferromagnetic component associated with the propagation vector k1 = 0 sets in at around 240 K. On the other hand, an external magnetic field applied along the c-axis effectively favours a three-dimensional (3D) spin correlation between the FeO5 bilayers evidenced by the increase of the intensity of satellite reflections with propagation vector k2 = (1/3, 1/3, 3/2). This magnetic modulation is identical to the charge ordered superstructure, highlighting the field-promoted coupling between the spin and charge degrees of freedom. Formation of the 3D spin correlations suppresses both the rod-type diffuse scattering and the k1 component. Simple symmetry-based arguments provide a natural explanation of the observed phenomenon and put forward a possible charge redistribution in the applied magnetic field. View Full-Text
Keywords: single crystal neutron diffraction; magnetic structure; diffuse scattering; charge order; spin frustration single crystal neutron diffraction; magnetic structure; diffuse scattering; charge order; spin frustration
►▼ Show Figures 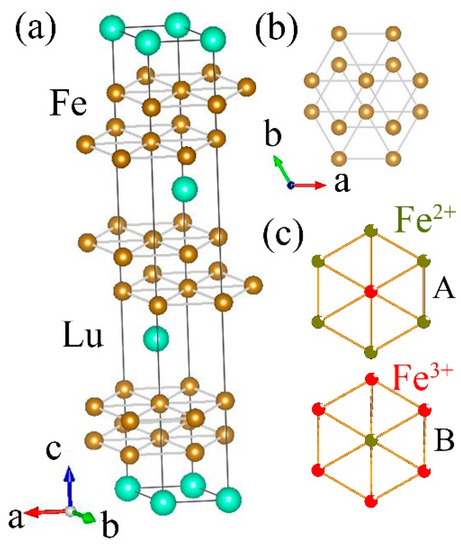