Specific Structural Disorder in an Anion Layer and Its Influence on Conducting Properties of New Crystals of the (BEDT-TTF)4A+[M3+(ox)3]G Family, Where G Is 2-Halopyridine; M Is Cr, Ga; A+ Is [K0.8(H3O)0.2]+
Previous Article in Journal

The quasi-two-dimensional organic charge-transfer salt -(BEDT-TTF)Cu(CN) is one of the prime candidates for a quantum spin-liquid due the strong spin frustration of its anisotropic triangular lattice in combination with its proximity to the Mott transition. Despite intensive investigations of the material’s low-temperature properties, several important questions remain to be answered. Particularly puzzling are the 6 K anomaly and the enigmatic effects observed in magnetic fields. Here we report on low-temperature measurements of lattice effects which were shown to be particularly strongly pronounced in this material (R. S. Manna et al., Phys. Rev. Lett. 2010, 104, 016403)). A special focus of our study lies on sample-to-sample variations of these effects and their implications on the interpretation of experimental data. By investigating overall nine single crystals from two different batches, we can state that there are considerable differences in the size of the second-order phase transition anomaly around 6 K, varying within a factor of 3. In addition, we find field-induced anomalies giving rise to pronounced features in the sample length for two out of these nine crystals for temperatures 9 K. We tentatively assign the latter effects to B-induced magnetic clusters suspected to nucleate around crystal imperfections. These B-induced effects are absent for the crystals where the 6 K anomaly is most strongly pronounced. The large lattice effects observed at 6 K are consistent with proposed pairing instabilities of fermionic excitations breaking the lattice symmetry. The strong sample-to-sample variation in the size of the phase transition anomaly suggests that the conversion of the fermions to bosons at the instability is only partial and to some extent influenced by not yet identified sample-specific parameters. View Full-Text
Keywords: quantum spin liquids; quantum spin frustration; organic compounds; thermal expansion quantum spin liquids; quantum spin frustration; organic compounds; thermal expansion
►▼ Show Figures 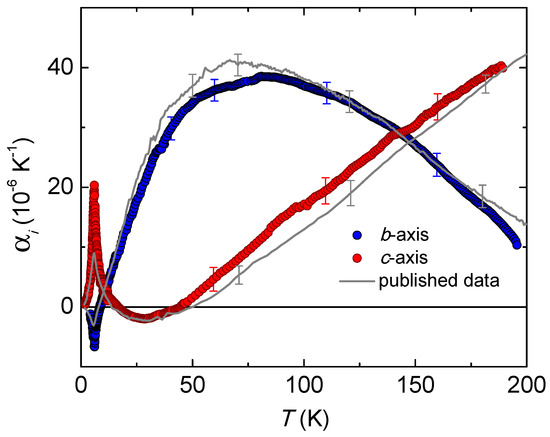