Current Trends in the Development of Microwave Reactors for the Synthesis of Nanomaterials in Laboratories and Industries: A Review
Next Article in Special Issue

NMR Crystallography of the Polymorphs of Metergoline

Two polymorphs of the drug compound metergoline (C25H29N3O2) were investigated in detail by solid-state NMR measurements. The results have been analysed by an advanced procedure, which uses experimental input together with the results of quantum chemical calculations that were performed for molecular crystals. In this way, it was possible to assign the total of 40 1H–13C correlation pairs in a highly complex system, namely, in the dynamically disordered polymorph with two independent molecules in the unit cell of a large volume of 4234 Å3. For the simpler polymorph, which exhibits only small-amplitude motions and has just one molecule in the unit cell with a volume of 529.0 Å3, the values of the principal elements of the 13C chemical shift tensors were measured. Additionally, for this polymorph, a set of crystal structure predictions were generated, and the {13C, 1H} isotropic and 13C anisotropic chemical shielding data were computed while using the gauge-including projector augmented-wave approach combined with the “revised Perdew-Burke-Ernzerhof“ exchange-correlation functional (GIPAW-RPBE). The experimental and theoretical results were combined in an application of the newly developed strategy to polymorph discrimination. This research thus opens up new routes towards more accurate characterization of the polymorphism of drug formulations. View Full-Text
Keywords: NMR crystallography; metergoline; polymorphism; GIPAW NMR crystallography; metergoline; polymorphism; GIPAW
►▼ Show Figures 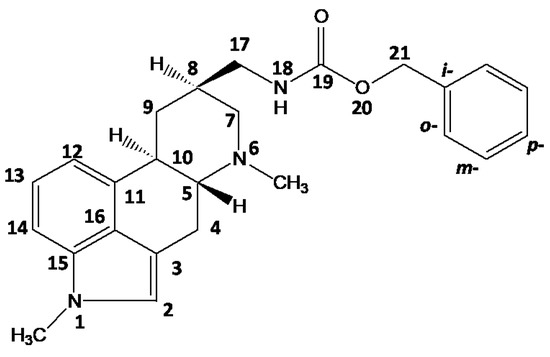