Incorporating the Thiazolo[5,4-d]thiazole Unit into a Coordination Polymer with Interdigitated Structure

Metal-organic frameworks (MOFs)/Porous coordination polymers (PCPs) have shown immense potential in various domains including separation, storage, sensing, catalysis, etc. [1,2,3,4,5]. MOFs are extended networks constituting of metal nodes and organic moiety linked via coordination bonds resulting in framework formation with potential voids [6,7]. MOFs can be readily functionalized using different organic building blocks thus imparting flexibility to tune the properties [8]. Metal-organic frameworks can also be tuned by using varied metals/metal clusters along with counter ions with different coordinating tendency [9,10,11,12,13]. MOFs have been classified as neutral and ionic MOFs (iMOFs) based on the framework charge [14]. Among various type of linkers, neutral nitrogen donor-based linkers have played a vital role since the emergence of MOFs owing to the easy availability and facile coordinating ability [15,16]. In pioneering reports, Zaworotko and Kitagawa have reported MOFs utilizing SiF62− as counter anion and neutral nitrogen donor linker [17,18]. Recently, (SiF62−) anion has been utilized extensively due to the tendency of SiF62− to bridge two-dimensional sheets to form an overall three-dimensional framework with formation of one dimensional channel with varied porosity depending on the length of the linker [19,20]. Owing to the presence of highly electronegative fluorine atoms in SiF62− it leads to the formation of highly charged polar surfaces. Owing to the highly charged polar surfaces, SiF62− anion based MOFs are currently being pursued in various sorption-based applications like CO2 capture, water sorption, hydrocarbon separation, etc. [21,22,23]. Thus, SiF62− as an inorganic pillar should be utilized to develop novel materials as it imparts higher selectivity in sorption-based applications.
Yet another important classification within the field of MOFs is to classify MOFs as rigid MOF or flexible MOF depending on the frameworks tendency to change the structure on the application of varied stimuli like pressure, temperature, etc. [24,25,26]. Flexible MOFs are the frameworks which tend to change the overall structure upon applications of different stimuli. Flexible MOFs have been utilized in various adsorption-based separation processes with promising results [27,28]. Thus, development of MOFs that exhibit structural transformation is quite crucial for the development of materials exhibiting selective sorption.
SiF62− anion-based rigid MOFs have been extensively studied but less attention has been paid towards flexible SiF62−-based MOF system. SiF62− anion-based flexible MOFs may show dual facet of high selectivity, hysteretic sorption along with various characteristics of flexible MOFs accompanied with properties imparted by SiF62− anions. Herein, we report the crystal structure of IPM-325 which exhibits structural transformations as characterized by PXRD.

Synthesis of Linker L ((1E,2E)-1,2-bis(pyridin-4-ylmethylene)hydrazine): Linker L was synthesized by modifying a reported protocol [35]. 4-pyridinecarboxaldehyde (49.94 mmol, 4.704 mL) was taken in a round bottomed flask. To this flask (1:1) Methanol (15 mL) and ethanol (15 mL) solution was added and catalytic quantity of acetic acid was added to this mixture. This mixture was stirred at 120 °C for 0.5 h. Further, hydrazine hydrate (19.97 mmol, 0.970 mL) was added and the reaction was maintained at 120 °C for 12 h. Subsequent cooling to room temperature yielded yellow crystalline product. Crude product was recrystallized from a solvent combination of methanol: ethanol solvent mixture. Yield = 90%.
Synthesis of IPM-325_p1: Single crystals of IPM-325_p1 were obtained by slow diffusion 1:1 mixture of zinc hexafluorosilicate hydrate (ZnSiF6, H2O) (0.1 mmol, 20.7 mg) and L = (1E,2E)-1,2-bis(pyridin-4-ylmethylene)hydrazine (0.1 mmol, 21 mg) in a solvent combination of Dichloromethane, methanol and benzene. Block shaped yellow colored crystal was obtained after one week. Yield ~60%.
Desolvated phase preparation: IPM-325_p1 was heated at 160 °C overnight with slow increase in the temperature at the rate of 5 °C/h and then maintaining 160 °C overnight. The desolvated phase was further characterized by thermogravimetric analysis.

IPM-325 was synthesized by slow diffusion of ligand L (Scheme 1) and ZnSiF6 at room temperature to yield block shaped yellow colored crystals. Single crystal X-ray diffraction analysis revealed that the compound crystallizes in C2/m space group with Z = 2 (Table 1). The asymmetric unit consist of Zn(II) metal ion along with two linkers and SiF62− anion with dichloromethane molecules and other disordered molecules present within the voids (Figure 1). Zn(II) metal node is octahedrally coordinated with N4F2 donor set with the distance between Zn(II) and equatorial nitrogen atoms 2.139 Å while the distance between Zn(II) and axial F atoms was 2.153 Å. SiF62− anions were found to bridge between two metal centers (Figure 2a). Overall structure was found to be two-fold interpenetrated in nature with an overall pcu topology (Figure 2b). Along the a-axis, the packing diagram showed types of rectangular voids Pore A and Pore B having dimensions 5.55 × 7.46 Å2 and 5.84 × 6.54 Å2 respectively (excluding van der Waals radii) (Figure 2b). The voids of the asynthesized framework (Figure 3) (IPM-325_p1; p represents phase) are filled with dichloromethane solvent wherein the H6 atom exhibits hydrogen bonding interaction with the F3 atom present at the metal node. To establish the bulk phase purity of IPM-325_p1, it was characterized using powder X-Ray diffraction measurements (PXRD) which showed a considerable shift in the observed pattern when compared to the simulated pattern (Figure 4a. The observed shift may be due to the overall structural transformation leading to formation of new phase named as IPM-325_p2 (p represents phase). To establish the bulk phase purity, we performed PXRD analysis of asynthesized crystals in presence of mother liquor. The PXRD pattern corroborated well with the simulated pattern (Figure 4a) thus establishing the bulk phase purity of IPM_325p1.
We observed a considerable shift in the PXRD pattern of the asynthesized compound upon exposure to air. This shift may be attributed to the sliding of the interpenetrated networks at ambient conditions due to escaping of low boiling guests from the voids. The PXRD profile showed an entirely new pattern thus confirming the formation of another structure. Another interesting observation from the PXRD pattern is that the intensity profile at 2θ = 5.37° peak exhibited a highly sharp peak after long exposure to ambient conditions. From this it can be inferred that IPM-325_p2 retains a crystalline nature after exposure to ambient conditions thus establishing the air stability of this phase. Due to the drastic shift observed in PXRD, we sought to obtain a single crystal of IPM-325_p2 after air exposure but due to the poor quality of the crystal we were unable to obtain single crystal data. Thermogravimetric analysis of the IPM-325_p2 present at ambient conditions showed ~10% weight loss around ~103 °C owing to the presence of occluded guests molecules present within the pores with overall loss of 20% observed until 220 °C. (Figure 4b). To obtain the desolvated phase of compound the material was heated at elevated temperature (160 °C) overnight with vacuum and further characterized via both PXRD and TGA measurements. Desolvated phase was characterized using thermogravimetric analysis which showed no initial loss in the desolvated phase of compound ~220 °C after which a gradual loss was observed which can be correlated to the decomposition of the framework. Powder X-ray diffraction measurement of the desolvated phase exhibited an entirely new pattern with the retention of original peak at 2θ = 5.37° along with the emergence of some new peaks (Figure 4a). Thus, IPM-325_p2 showed another structural transformation to yield the desolvated phase IPM-325_p3 (p represents phase). Also, the peak at 2θ = 5.37° maintained its intensity thus from which we can infer that the desolvated framework is highly crystalline in nature. Low temperature N2 adsorption was performed, which revealed slow opening of the pore (Figure 5).
Thus, we have successfully synthesized and characterized a bi-porous MOF; IPM-325_p1 wherein SiF62− anion acts as an inorganic pillar. IPM-325_p2 shows structural transformation as analyzed by PXRD measurements. Further investigations regarding the structural aspect of the desolvated phase IPM-325_p3 and its sorption measurements are currently being pursued in our lab.

S.K.G. supervised the project. B.M. and S.S. carried out the experimentation and wrote the manuscript. 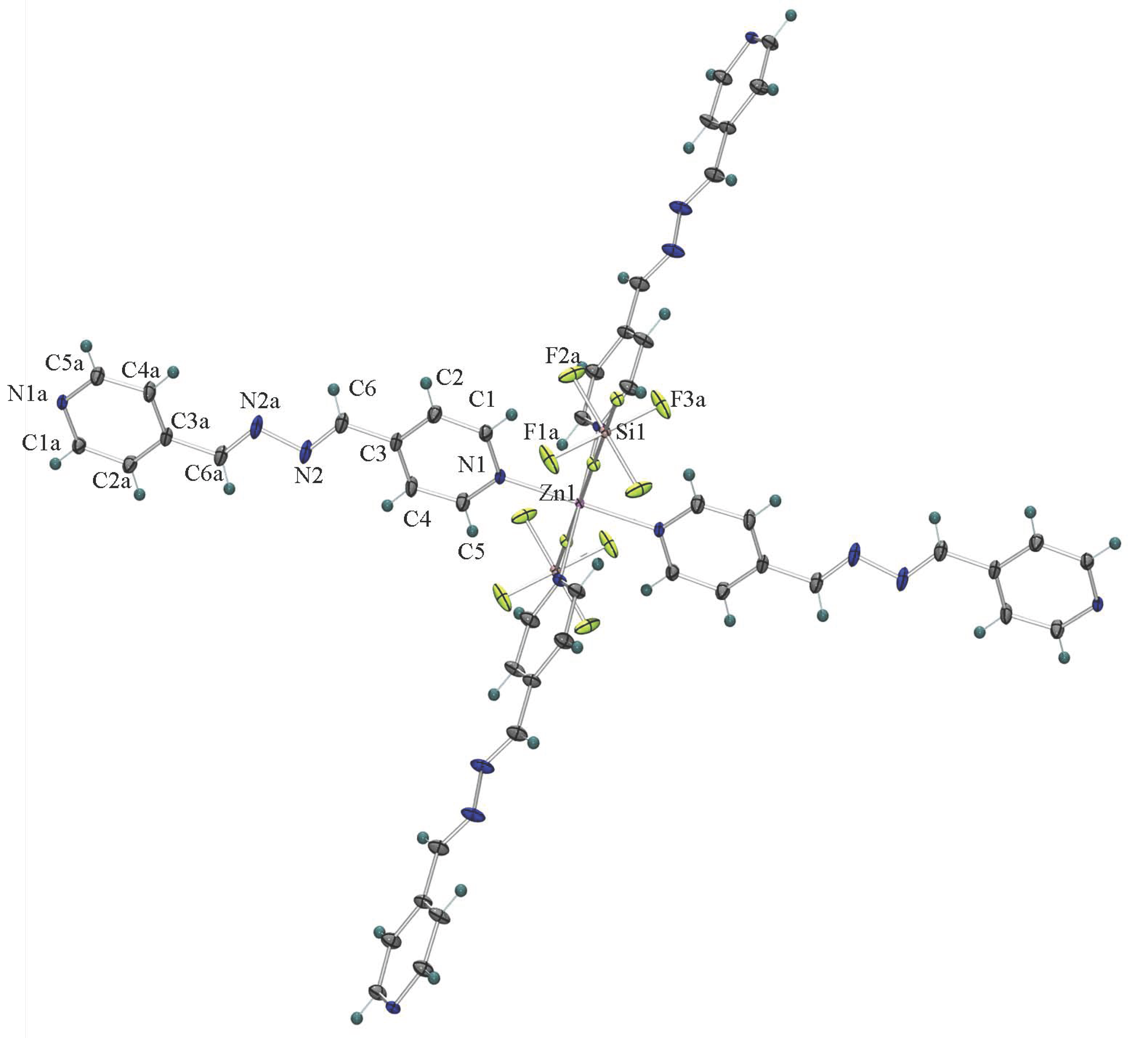 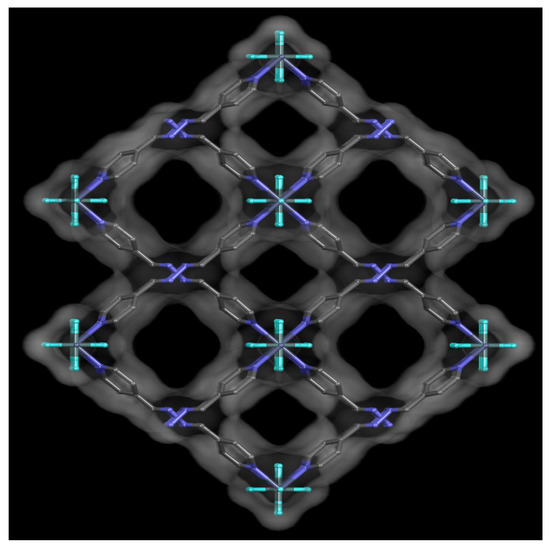 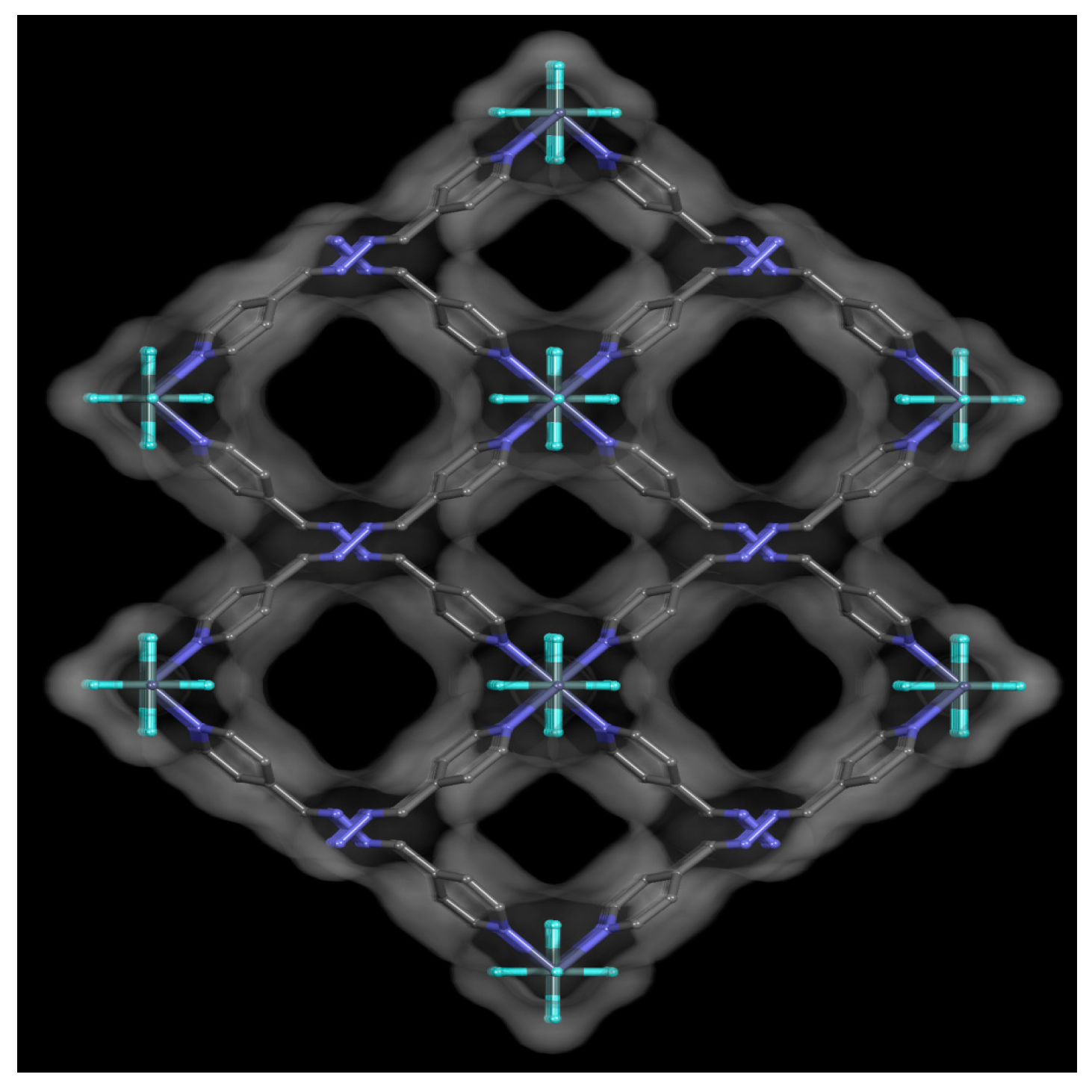 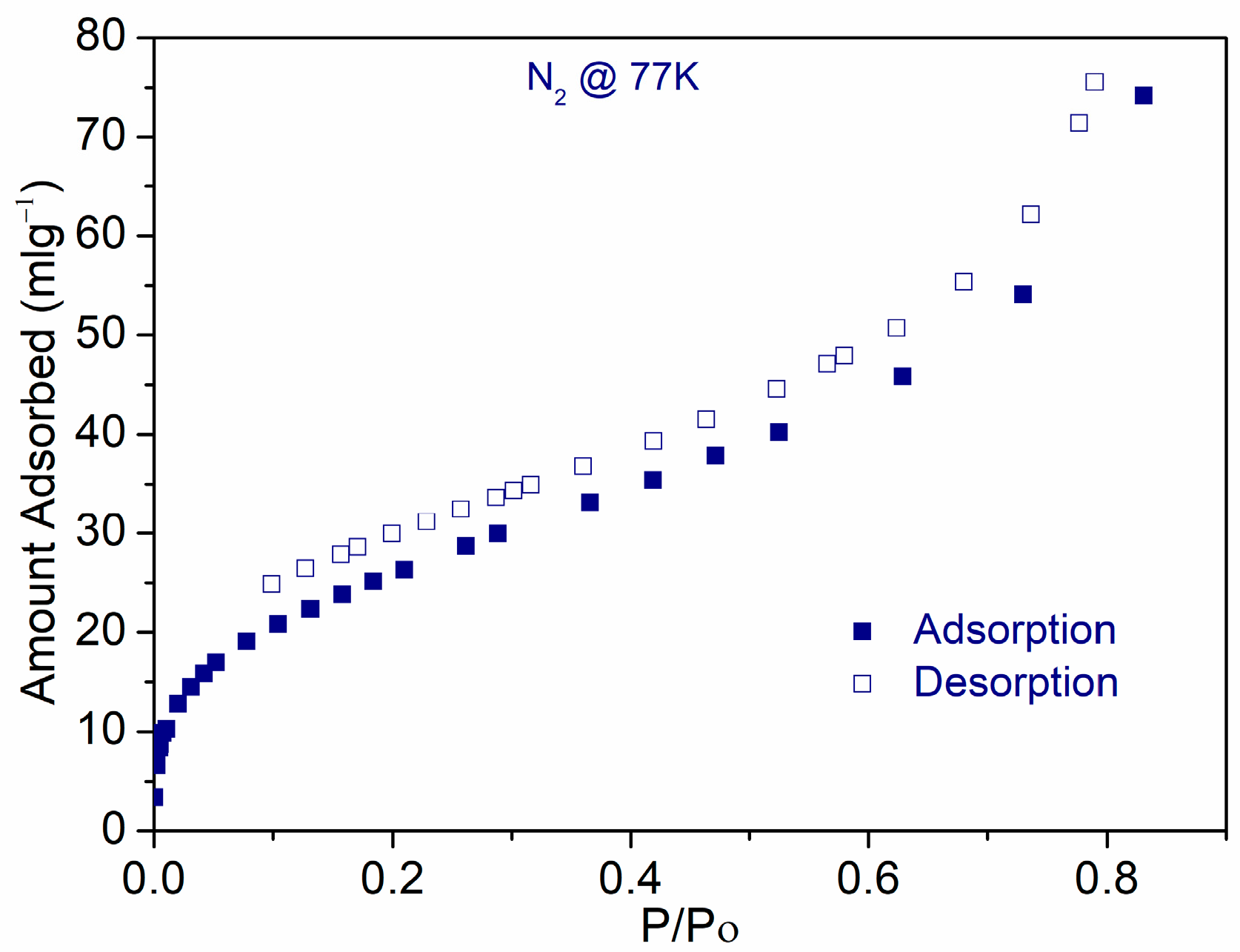 Table 1. Crystal data for IPM-325_p1.
Table 1. Crystal data for IPM-325_p1.
© 2018 by the authors. Licensee MDPI, Basel, Switzerland. This article is an open access article distributed under the terms and conditions of the Creative Commons Attribution (CC BY) license (http://creativecommons.org/licenses/by/4.0/).
We use cookies on our website to ensure you get the best experience. Read more about our cookies here.
Accept
We have just recently launched a new version of our website. Help us to further improve by taking part in this short 5 minute survey here. here.
Never show this again