Investigation of Structure, Optical, and Electrical Properties of CuS Thin Films by CBD Technique

Organic thin-film transistors (OTFTs) have attracted considerable attention in emerging electronics, such as flexible electronics and wearable electronics, due to their features of intrinsic bendability and low-cost printability [1,2]. In the past decades, OTFTs have been applied to various applications, including biosensors [3,4,5], wearable amplifiers [6,7], and flexible optoelectronic systems [8,9,10]. However, printed OTFTs typically demonstrate a modest performance, such as with low device mobilities and large operating voltages, which had been bottlenecks for the development of printed OTFTs [11,12,13]. Recently, a report of all-inkjet printed OTFTs showing a steep subthreshold slope to the thermionic limit has opened up new possibilities of printed electronics for real-world applications [6].
Among various semiconductor applications, optoelectronics is one of the most important branches. There have been plentiful reports on OTFTs used as photodetectors and phototransistors [8], but only sporadic demonstrations by all-printed OTFTs [14,15]. In addition, most of the reports were focused on the response to ultraviolet (UV) lights [8,15,16]. Therefore, it would be interesting to investigate the photo-sensitivity of all-inkjet printed OTFTs, in particular under the visible light exposure that has not been deeply investigated. Furthermore, it is also essential for the real-world applications of photodetectors, printable counterparts that are insensitive to lights to be integrated into a photodetector circuit building block or a system for signal conditioning and processing. Despite examples of using a photo-blocking layer that adds fabrication complexity and cost [17], it is also essential to find some intrinsic methods. Typical organic semiconductors have bandgaps of around 2 eV [6], of which the energy corresponds to a visible light, so they can be used for photo-sensitive OTFTs. To develop photo-insensitive OTFTs, wide-bandgap organic semiconductors (e.g., >3 eV) need to be used. Therefore, to develop all-inkjet printed OTFTs with and without photo-sensitivity to visible light, it is essential to use semiconductors with different bandgaps. However, it still needs to be further explored and validated whether there is a compatible fabrication method for both types of devices without adding fabrication cost and complexity.
In this study, the photoresponse of all-inkjet printed OTFTs to visible lights is investigated. Rather than developing photo-sensitive OTFTs only, an important research question is whether there is a simple OTFT fabrication process used by only a printing technique that can reliably produce both types of OTFTs with and without photo-sensitivity to visible light. To this end, two different organic semiconductors with different bandgaps are designed in the same device structure. The electrical and photo-sensing characteristics of all-inkjet printed OTFTs are measured, and their sensitivity and insensitivity to visible light are investigated.

Poly(1,1,2,4,4,5,5,6,7,7-decafluoro-3-oxa-1,6-heptadiene), known as CYTOP (CTL-809M), and its solvent (CT-Solv. 180) were purchased from Asahi Glass, Tokyo, Japan. 2,7-Dioctyl[1]benzothieno[3,2-b][1]benzothiophene (C8-BTBT), 6,13-bis (triisopropylsilylethynyl) pentacene (TIPS-pentacene), polystyrene (PS), polyvinyl cinnamate (PVC), and perfluorobenzenethiol (PFBT) were purchased from Sigma-Aldrich, Gillingham, UK.
The conductive silver (Ag) ink (jet-600C) was supplied by Hisense Electronics, Kunshan, China. The gate dielectric ink was prepared by dissolving PVC in anisole at a concentration of 45 mg/mL. The semiconductor inks were formulated by dissolving C8-BTBT (or TIPS-pentacene) and PS in anisole at a concentration of 10 mg/mL and then mixing the two solutions at a volume-to-volume ratio of 3:1. The addition of PS was to improve the quality of printed semiconductor thin films. For the encapsulation ink, CYTOP was diluted with its solvent at a weight-to-weight ratio of 3:1.

A bottom-gate bottom-contact device structure was used in this study, as shown in Figure 1. A material inkjet printer, DMP-2831(purchased from FUJIFILM Dimatix, Lebanon, New Hampshire, USA), was used for all the fabrication processes, which were conducted in ambient air. All the inks were filled into DMPLCP-11610 cartridges (FUJIFILM Dimatix), of which the nozzles typically jet droplets at the size of around 10 pL. The waveform setting for nozzles was the same as the reported setting in the previous studies [6,18,19,20].
The Ag ink was printed on a flexible plastic polyethylene naphthalate (PEN) (Teonex®, DuPont, Wilmington, DE, USA) substrate at a drop spacing of 50 μm, followed by annealing at 130 °C for 15 min to form gate electrodes. A single nozzle was used to better control the geometrical precision of printed conductive thin films. Then, the PVC ink was printed at a drop spacing of 10 μm, and 6 consecutive nozzles were used for jetting at the same time with a cartridge angle of 11.4° (which corresponds to the setting for the drop spacing of 50 μm). Therefore, the actual PVC thin films were printed at a horizontal drop spacing of 10 μm and a vertical drop spacing of 50 μm. The printed PVC film was prebaked at 100 °C for 1 min, exposed to 254 nm UV light for 30 min, and hard-baked at 100 °C for 30 min. The thickness of the printed PVC film was measured to be around 151 nm (of which the unit-area gate capacitance was measured to be 19.9 nF/cm2). After the formation of the cross-linked PVC gate insulator, the Ag ink was printed again and then annealed at 120 °C for 15 min to form source/drain electrodes of around 100 nm, defining the channel width and length of 1200 µm and 80 µm, respectively. The source/drain electrodes were treated by a 0.1% PFBT-ethanol solution for 3 min and rinsed with ethanol. The semiconductor was printed with 3 consecutive nozzles at a drop spacing of 5 μm and annealed at 60 °C for 30 min. Finally, CYTOP ink was printed to encapsulate the devices and annealed at 60 °C for 30 min.

Ultraviolet–visible (UV–vis) spectroscopy measurements of TIPS-pentacene/PS and C8-BTBT/PS films on quartz substrates were made using a UniCam UV-vis spectrometer. The electrical properties of the devices were characterized with a Keithley 4200 Semiconductor Characterization System (Solon, OH, USA). The photoresponse of the devices was measured under LEDs with optical filters centering at wavelengths of 400 nm, 500 nm, 600 nm, 700 nm, and 800 nm. The light intensity for each wavelength was adjusted to 10 mW/cm2, calibrated by a Thorlabs photodetector DET10A. The LEDs, optical filters, and photodetector were from Thorlabs, Newton, NJ, USA. The illumination area was a circle with a diameter of around 5 mm. The whole area of the channel was irradiated, with the light applied from the top through the CYTOP layer.

The mobility (µ) and threshold voltage (VT) were calculated by fitting the square root of the drain current (ID) versus the gate voltage (VGS) using the following equation: where W is the channel width, L the channel length, and Ci the gate dielectric capacitance per unit area. The subthreshold slope was extracted by fitting the ID versus VGS in the subthreshold regime using the following equation: where Iref is the reference current in the subthreshold regime at the reference voltage Vref.

This study demonstrated all-inkjet printed OTFTs with and without sensitivity to visible lights. The fabrication of both OTFTs was based on the same method and device structure, while the only difference was the semiconductor materials used. C8-BTBT, the semiconductor material used in photo-insensitive OTFTs, was characterized to have a large optical bandgap of 3.3 eV, so it does not have visible light absorption; TIPS-pentacene, the semiconductor material used in photo-sensitive OTFTs, was characterized to have one of the optical bandgaps in which the photon energy is close to the boundary between visible and infrared lights. In addition, the TIPS-pentacene OTFTs demonstrated a decent photo responsivity of 55.9 mA/W to 400-nm light that is comparable to its vacuum-processed counterparts. This work confirms the possibility to simply integrate the two device technologies into one substrate by one fabrication route. This work would also trigger further study into how to combine photo-sensitive OTFTs as photodetectors and photo-insensitive OTFTs for signal conditioning to build a printable photodetector circuitry or system. In addition, evaluating and improving the photo responsivity and sensitivity of all-inkjet printed organic phototransistors would be another important work for future study.

This research was funded by the Wellcome Trust under Junior Interdisciplinary Fellowship (204845/Z/16/Z) and the IEEE Electron Devices Society PhD Student Fellowship. 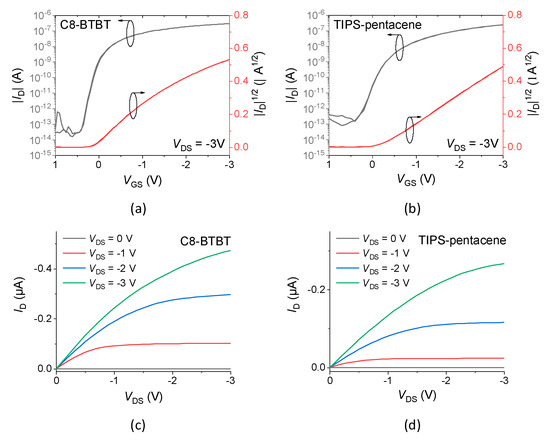 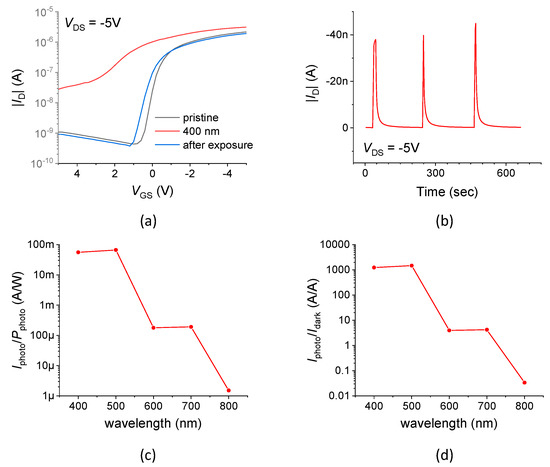 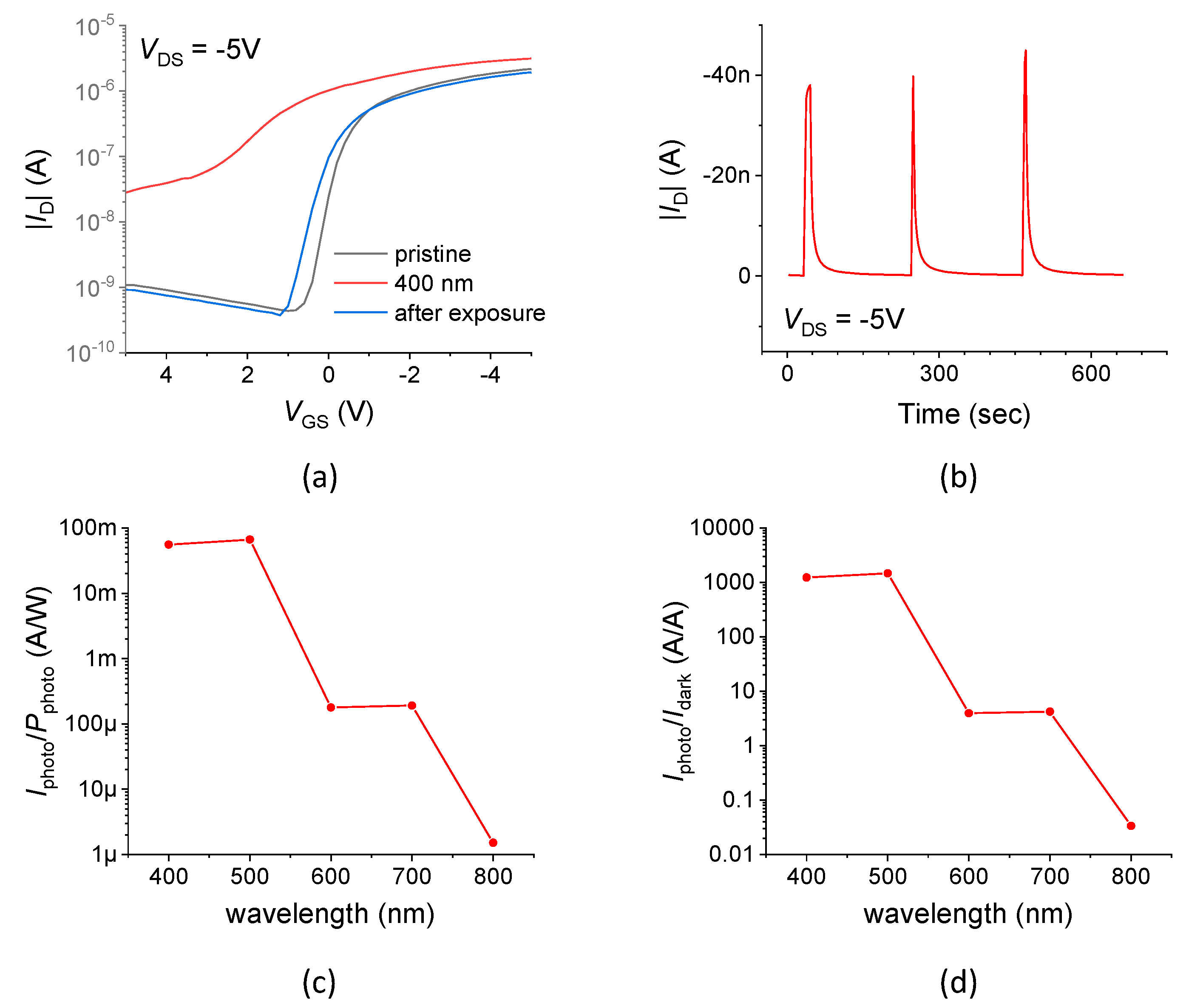