2. A New Approach: Modulation of the Surface Tension at a Biphasic Interface

We have recently proposed a novel, fast, and inexpensive approach to processing PMP films [16]. In this case, PMP is obtained by the photopolymerization of an organic mixture sandwiched between two slide glasses. The mixture components have different polymerization rates; they are di-pentaerythritol-penta/hexa-acrylate (DPEPA), 1-vinyl-2-pyrrolidinone (NVP), and 4-aminophenol (4-AP) (Sigma-Aldrich, St. Louis, MO, USA). Bis (2,4,6-trimethylbenzoyl) phosphines (CIBA, Basel, Switzerland) is used as a photoinitiator. Details are reported in Castagna et al. [16]. In short, an 8:1 molar ratio of NVP to DPEPA and illumination by one side of the sample allows getting an asymmetric photopolymerization process; therefore, the fabricated film results in a flexible system that is composed by a harder DPEPA-co-NVP network and a softer doped-NVP part, in which a presence of oligomers is identified. The Scanning Electron Microscopy (SEM) (Raith 150, Dortmund, Germany) images show a brush-like morphology in the DPEPA-co-NVP side, when dissolving the film in N-methyl-pirrolidinone (Sigma-Aldrich, St. Louis, MO, USA); while a viscous component is on the other side of the film. The basic film structure can be seen as made by two different inter-digitized parts: one more rigid, but flexible, (the reticulated one) acting as a sort of supporting skeleton for the system, while the second acts as the effective light-activated motor of the system. The phase separation process, occurring in the bulk during photopolymerization, is responsible for the observed bristles structure. Actually, the resulting observed morphology is reminiscent of the one obtained by phase separation in holographic polymer dispersed liquid crystals (HPDLCs), where an alternating sequence of liquid crystal-rich and polymer-rich regions is obtained [35,36,37]. Here, soft doped-NVP plays the same role of inert LC in HPDLCs. Thus, in our case, as mentioned, the doped-NVP-richer part is the actual motor of the PMP film.
Some preliminary observations [16] suggested that 4-AP-doped NVP could act as a driving motor for the light-induced motion of a composite film when included in the PMP mixture, as a result of the light-induced changes of the surface tension at the interface between the DPEPA skeleton and the NVP-rich side. The reduction of surface tension gradient increases the tendency of NVP to escape when illuminated by light. As a consequence, the thin highly reticulated film of DPEPA tends to bend. By using in place of NVP a different similar compound—for instance, N-methyl-pyrrolidinone (NMP), which has a structure similar to NVP, but does not allow the formation of oligomers/polymers—no movement is observed under illumination, underlining the need to include NVP in the system.
Switching-off the incident beam results in restoring the original shape of the material and, as a consequence, of the whole PMP film. In this way, the viscoelastic properties of the 4-AP-doped NVP together with the re-adaptation of the harder polymeric network of DPEPA brings the film to the original position. The working mechanism of the described PMP film is depicted in Figure 1, in which the initial position (Figure 1a) is obtained when the light is switched-off, while the bending (Figure 1b) under light illumination.
The demonstration of the photomobile properties of this film has been given in a simple experiment reported by Castagna et al. [16]. It is remarkable that the bending direction of the polymeric stripe is not dependent on the illumination side (Figure 1b), while the amount and rate of bending increase with the light intensity and depend on the used wavelength.
The advantages of this approach over the other methods to realize PMPs relies on the very easy and extremely cheap way to obtain these films. As a matter of fact, the PMP film is obtained in one step: the photopolymerization synthesis, using commercially available compounds. Large bending angles are obtained, and the film is easily activated (low energy doses are required to move the film). The drawback is the slow relaxation time (the time required to restore the initial position of the film), being governed by diffusion and capillary forces. At the present state of the art, this prevents the achievement of high oscillation frequencies.
One basic property of the used mixture is a strong shrinking effect under photopolymerization [38,39,40,41,42,43,44,45,46] with the potential to act as a glue [47,48,49,50,51,52,53,54]. As mentioned, the PMP film is made by a double-layered structure realized by an asymmetric photopolymerization process [16]. As a consequence, the PMP film component with a higher degree of polymerization is the first one interacting with the incoming polymerizing light (as confirmed by Attenuated Total Reflectance/Fourier Transform Infra-Red (ATR/FT-IR) measurements [16]). This is mainly made by the polymerized, highly cross-linked, multi-acrylate present in the mixture. In these conditions, when polymerized, multi-acrylate is able to act as a glue. The polymer shrinkage is well assessed in acrylate/multi-acrylate systems [38,39,40,41,42,43,44,45,46]: it is due to the conversion of sp2 carbon to carbon double bonds to sp3 carbon–carbon bonds under polymerization. In the first case, the intermolecular distances are in the range of approximately 4–5 Å, while in the second case, they are reduced (C-C bonds length is approximately 1.4 Å). This property makes the material suitable for realizing a plasmonic photomobile film, as described in the next section.

We have discussed different approaches in PMP manufacturing focusing on a novel approach based on light-induced modulation of the surface tension at the polymer interface. We have shown that these materials are suitable to develop a novel method to modify the PMP properties in order to get a nano-patterned photomobile polymer with plasmonic properties. This is achieved by using a novel organic mixture that under photopolymerization allows obtaining sensitive PMPs and exfoliation of the nanostructures. The plasmonic properties are highlighted by the LSPR whose intensity decreases under illumination with a moderate power light source. The plasmonic-related motion of the polymer is also recorded.

This research was founded by the European Union under the programme FET-OPEN within the project “PULSE-COM” grant agreement no. 863227.

Special thanks to JordankaTasseva of the National Institute of Nuclear Physics, Naples, Italy. 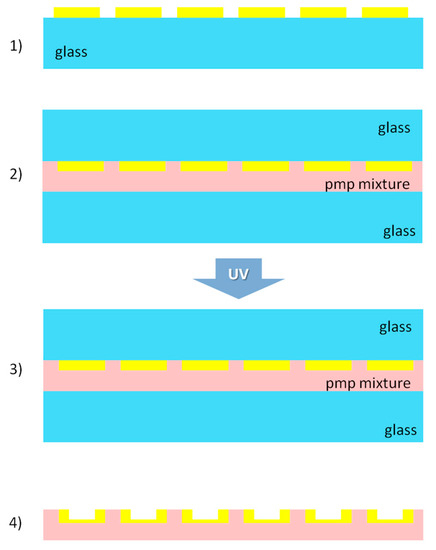 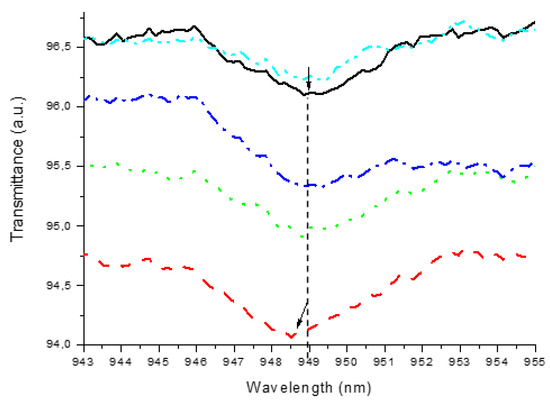 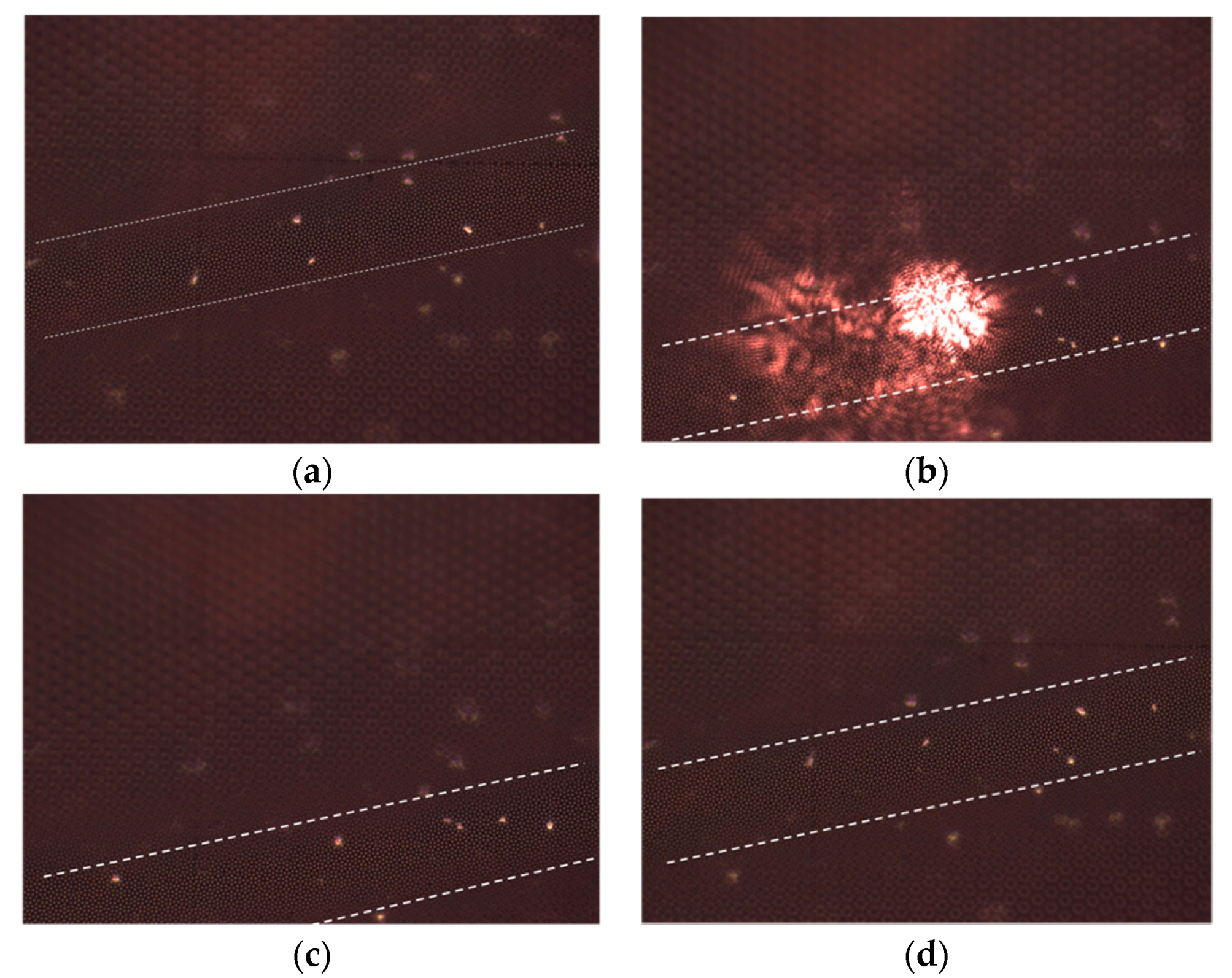