Weyl nodes (WN) are linear band crossings existing in odd dimensions [1,2,3]. Three dimensional WN have been extensively exploited in recent years for their intriguing physics. As a drain/source of Berry curvatures, WN hold a quantized topological index, Chern number, of . Due to the stability of the topological index, WN are extremely tolerant to disorders and can be gapped only by the coalesce and annihilation between WN with opposite Chern numbers. WN are also renowned for their Chiral Anomaly Magnetoresistance [4,5,6], Fermi arc surface states [7,8,9,10,11,12,13,14,15] and nonlinear Hall effects [16,17,18]. More recently, topological nodes beyond WN [19], for instance, Dirac points [20,21,22,23,24,25,26], spin-1, spin-2/3 WN and double WN [27,28,29,30] have also gained significant progress in research.
In photonics, WN have been exploited in photonic crystals [31,32,33,34], metamaterials [35,36,37], magnetized plasma [38,39] and in synthetic spaces [40,41]. Despite substantial studies, there have been only a few ideal WN designs. Ideal WN are salient because no excessive modes are present at the WN frequency, which is beneficial for revealing the properties of WN without disturbance coming from excessive bands [42]. In this article, we proposed a printed circuit board (PCB) technique compatible ideal WN metacrystal functioning in the millimeter wavelength regime (~36 GHz). Group theory analysis shows that the WN are stabilized by screw rotation symmetry in space group (SG) 19, and are spawned from ideal line nodes (LN) in SG 61. Fermi arcs connecting WN with opposite Chern numbers are also found.

The metacrystals we propose comprise two double-layer PCB boards in one primitive cell. The primitive cell’s dimension is . Each PCB board layer’s thickness is , hence, thickness of the dielectric layer between the PCB boards is 0.5 mm and has a relative permittivity of 2.2, which is within the common PCB board material Teflon’s parameter range. The PCB board’s relative permittivity is as well. All the metallic layers have the standard 37 thickness and are assumed to work as perfect electric conductors within the frequency range of interest. The metacrystal is shown in Figure 1a. Each PCB layer consists of double-layer metallic wire-like structures and the layers are electrically connected by metal-coated 0.2 mm radius through holes. The metallic pads connecting the through holes to the wires have radii of 0.4 mm. Note that in the figures, the primitive cell in the x–y direction is denoted by the red dashed lines. For clarity, the two layers are not drawn together, though it should be remembered that in the real structure, the two layers are gapped by a merely 0.5 mm thickness dielectric board. The designed structure belongs to SG 61 (Pbca). It will be shown later in the article that this metacrystal could be reduced to SG 19 (P212121) by introducing a deformation, as shown in Figure 2a, of which the inversion symmetry and glide symmetries are broken, and are later essential for the creation of the WN.

Without the deformation, the metacrystal structure belongs to SG 61, whose group representatives are translational symmetry T, three glide symmetries , three screw rotation symmetries , and inversion symmetry P. The nonsymmorphic group operations are expressed explicitly as:
Nonsymmorphic group operations have been extensively used to protect degeneracies at the boundaries of the Brillouin zone beyond the capabilities of point group [43,44]. A band diagram of the metacrystal is given in Figure 1b, whose sweeping path is given in Figure 1c, and presents band crossings along the high symmetry lines and that is line node (LN) degeneracy. Noticeably, the band diagram is pseudo-gapped for the LN, meaning no other excessive bands can be found around the LN frequency at other sites in the Brillouin zone. Furthermore, on the edge of the Brillouin zone (RS, RU and RT high symmetry lines), Dirac nodal lines are found, featuring four-fold degeneracy on the whole edges [45].

Since the LN is due to an accidental degeneracy that resides on the high symmetry line/plane, the two bands consisting of LN degeneracy are expected to belong to different irreducible group representations. On the high symmetry lines and , the little group reduced to and }, respectively. Despite the existence of the half unit cell translations within the nonsymmorphic operations, the coset groups of the little groups are found to be isomorphic to simple point group , whose character and compatability tables are given below in Table 1 and Table 2. Note that on the and high symmetry lines, the mirror operation are and while is .
Field distributions of the electrical component on the momentums half way on and are given in Figure 1e. Note that after multiplying the phase factor , is the periodic function in the primitive cell. The left two and the right two images belong to the same frequency, respectively. In the figures, the mirror plane and the rotation axis are illustrated by the solid black lines, and the half unit cell translations related to the nonsymmorphic group operations are illustrated by the yellow arrow. In the left two figures in Figure 1e, it can be inspected that the state is an even state under the glide operation, and an odd state under the screw rotation operation from their (0 1 0) and (1 0 0) direction’s fields. The group representation is, thus, according to Table 1. Whereas, for the other state consisting the LN, it is odd under the glide operation and even under the screw rotation operation, meaning the group representation is .

What the group theory analysis can show is that after introducing certain structure deformation, whether the band crossing is kept or gapped can be predicted. Introducing the deformation shown in Figure 2a will essentially reduce the original SG 61 to SG 19, since the only remaining symmetries are the three screw rotations. Therefore, on the and high symmetry lines, the little groups are isomorphic to point group (Table 2). In the compatibility relation in Table 2, and can be reduced to different irreducible representations and , meaning the band crossings are kept, while gapped when k is away from the high symmetry lines.
Instead, if the original metacrystal is reduced to SG 29 by keeping and , the isomorphic point group is in the compatibility relation in Table 2. The irreducible representations are for both the bands, meaning the LN is immediately gapped. This is consistent with the fact that Weyl nodes cannot be found on mirror planes since mirror operations can flip the chirality of the Weyl nodes. The band structure of the SG 29 metacrystal is given in Figure 3, showing a full band gap around 36 GHz.

2.4. Surface States of the LN and the WN

It has been well understood that LN and WN hold surface states. LN hold the ‘drumhead’ surface states and are normally flat bands that could enhance interactions and are promising for high temperature superconductivity. The WN, on the other hand, hold the so-called Fermi arcs that have been exploited in their intriguing transport properties and unconventional quantum Hall effects [14].
To explore the surface states of the metacrystal, we created super cell configurations that are periodic in the x and y direction and are confined with perfect electrical conductors (PEC) with 10 unit cells in the z-direction. The results are illustrated in Figure 4 and the configuration of the projected surface Brillouin is give in Figure 5. For the unperturbed LN metacrystal, surface states that are reminiscences of the drumhead surface states are found, while for the WN metacrystal, Fermi arcs are found around the momentums where LN are found (red dots in Figure 4b).
At a fixed frequency (36.5 GHz in Figure 5), Fermi arcs are found to connect WN with opposite Chern numbers (WN1 and WN2 located on the kx and ky axis, respectively), which are the results of the integral of Berry curvatures on a closed surface that include a WN [1]. The Fermi arcs are illustrated by the magenta and red lines that are residing on the top and the bottom surfaces, respectively. Figure 5b shows the real space field distribution of the topological surface state excited by a line current source that fixes the at . The unidirectionality of the surface state propagation is consistent to the calculated equi-frequency contour in Figure 5a. Figure 5c shows the same surface state excitation simulation with an extra square-shaped defect. Again, the unidirectionality demonstrates the topological robustness of the fermi arc surfaces.

Our design has shown how to obtain WN in SG 19 from LN in SG 61. The pure PCB layered design could also benefit the tunings of the WN. In Figure 6, we show the band diagrams of the WN metacrystal with various z-direction periods. Note that the PCB layers’ thicknesses are conserved at 1 mm and only the interlayer dielectric boards’ thickness is changed. Intriguingly, locations of the WN in the Brillouin zone can be effectively tuned by the periodicity. Note that when the thickness is reduced to below 4.8 mm, the WN coalesce and annihilate. The highly sensitive locations of the WN to the periodicity could be used to generate giant effective magnetic fields in the WN metacrystal by introducing a gradually changing thickness. Since photons do not respond to actual magnetic fields, effective magnetic fields are crucial for mimicking the physical effects of real magnetic fields, for example, Landau quantization and chiral zero modes [46,47]. 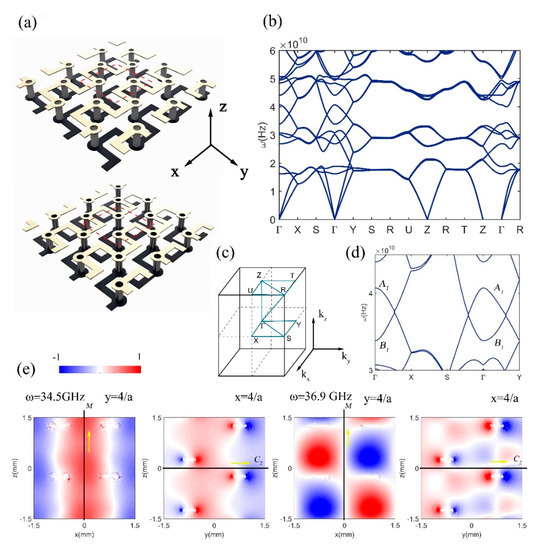 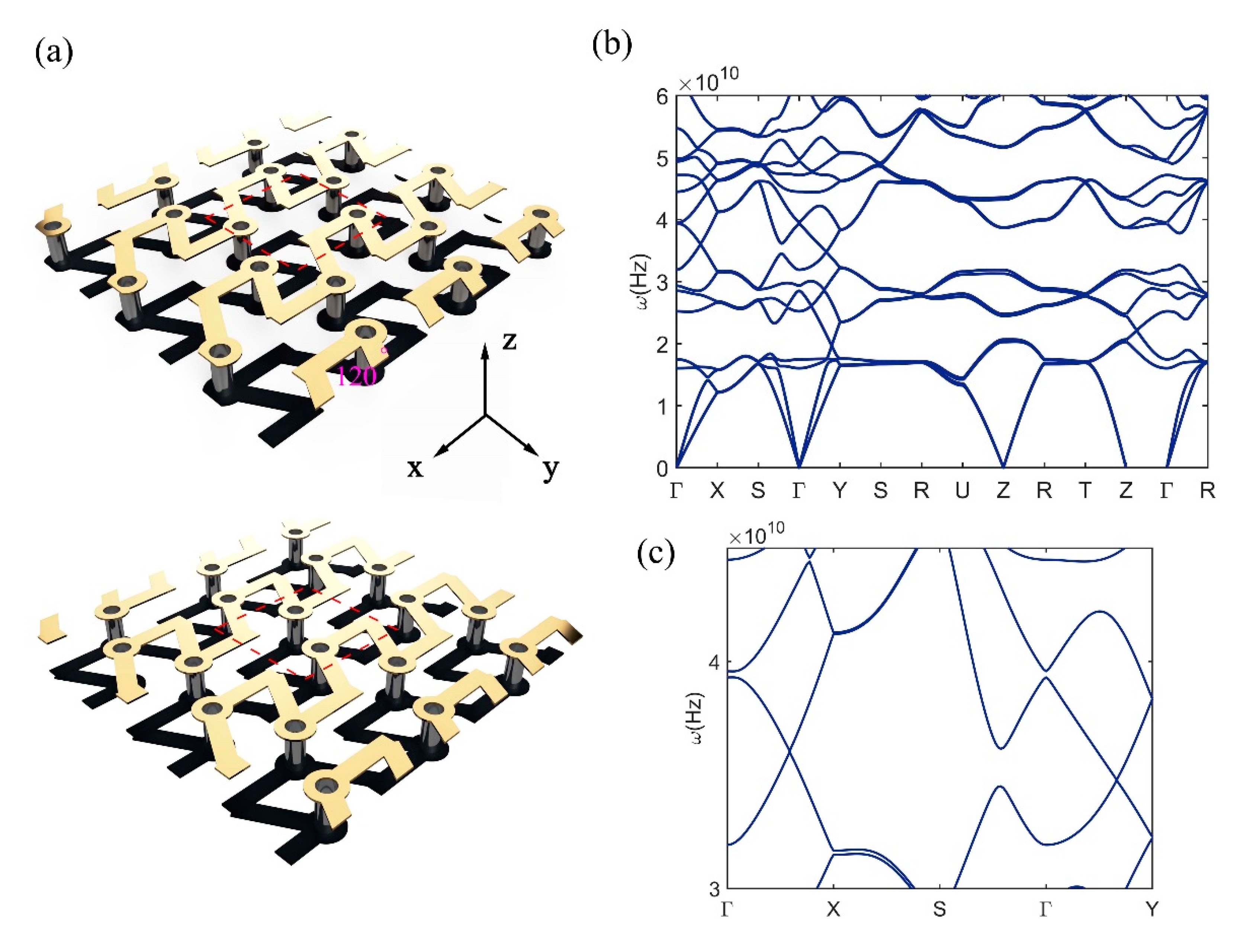 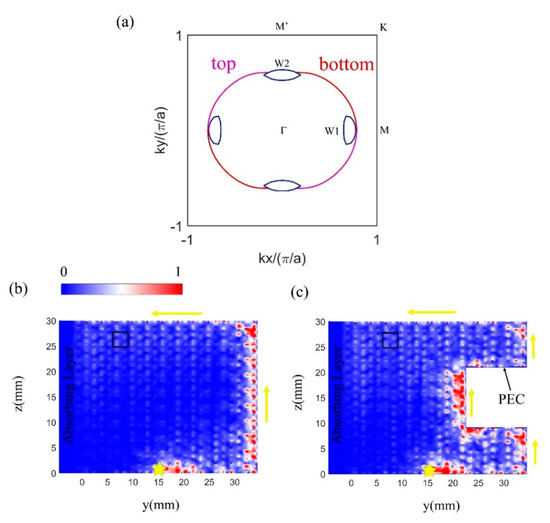 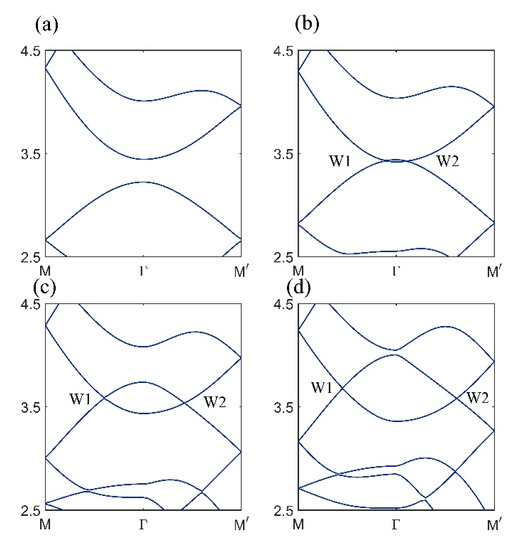 Table 2. Compatibility table of group .
Table 2. Compatibility table of group .
© 2020 by the authors. Licensee MDPI, Basel, Switzerland. This article is an open access article distributed under the terms and conditions of the Creative Commons Attribution (CC BY) license (http://creativecommons.org/licenses/by/4.0/).
We use cookies on our website to ensure you get the best experience. Read more about our cookies here.
Accept
We have just recently launched a new version of our website. Help us to further improve by taking part in this short 5 minute survey here. here.
Never show this again