Effect of Doping on the Electrical Characteristics of ZnSe

In this work, we present a simple method to improve the thermoelectric performance of the RF sputtered bismuth telluride films by raising the power of deposition. The as-deposited samples synthesized under different powers were investigated and compared. It shows that the films prepared under relatively higher power conditions exhibit much higher electrical conductivity to result in a greater power factor accompanied with a minor drop in the Seebeck coefficients. A relationship is established between the improvement in thermoelectric performance and the decrease in crystallinity, which might also reduce the thermal conductivity. A maximum power factor of 5.65 × 10−4 W·m−1·K−2 at 470 K is obtained for the sample deposited under 50 W with its Seebeck coefficient being −105 μV/K. The temperature-dependent behaviors of the samples are also looked into and discussed. This work might offer an in-situ and cost-effective approach to improve the performance of thermoelectric materials.
Keywords: bismuth telluride; thermoelectric material; RF sputtering bismuth telluride; thermoelectric material; RF sputtering

Thermoelectric technology shows a great potential in power generation, cooling and applications of related mechanisms [1,2,3]. According to the theoretical mode [4], the performance of thermoelectric material used in such devices is evaluated by a dimensionless factor, the figure of merit (ZT). The ZT here is defined as α2σT/κ, where α is the Seebeck coefficient, σ is the electrical conductivity, κ is the total thermal conductivity, and T is the temperature. The larger the figure is, the higher a thermoelectric conversion efficiency is likely to be achieved. Furthermore, another important parameter is the power factor, which is defined as PF = α2σ. It evaluates the material’s ability of generating electrical energy from a constrained space.
Many thermoelectric materials are being explored for power generation applications, such as silicides [5], PbTe [6], half-Heusler [7] and skutterudites [8], and different thermoelectric material should be taken advantage of under different temperature conditions. In situations from room temperature to around 500 K, bismuth telluride, a V–VI semiconductor with a narrow band gap, and bismuth-telluride-based materials are a promising choice. The ZT of bulk bismuth telluride is around 1, which is considered to be the critical value to be utilized in a practical thermoelectric device. Besides, different methods are applied in improving ZT to achieve a larger energy conversion efficiency. Doping is one of the methods used, and a ZT of 1.4 at 373 K was achieved in bulk BiSbTe3 [9]. Besides, modification on nanostructures also helps improve ZT. For instance, an outstanding factor of 2.4 is observed in a superlattice structure of p-type Bi2Te3/Sb2Te3 [10].
Recent years, different methods have been studied and utilized to synthesize bismuth telluride, including but not limited to chemical synthesis [11], electrodeposition [12,13,14], ion beam sputtering deposition [15], magnetron sputtering deposition [16,17,18,19,20] and molecular beam epitaxy [21]. Among these methods, magnetron sputtering is frequently used for the merit of being cost-effective and time-saving, and having the potential to be used in industrial manufacturing. Former studies have also shown that the polycrystalline structure created by magnetron sputtering has a positive effect on ZT, for the lattice boundaries help reflect phonons to greatly reduce the thermal conductivity but have a minor influence on electronics [16,17,22,23]. While most studies of magnetron sputtered bismuth telluride film concentrated on the effect of deposition temperature [20] or post-treatment of deposited films [18,19], the effect of other parameters in the sputtering process seems to be less looked into.
In this work, the effect of deposition power on the as-prepared bismuth telluride films deposited by RF sputtering is studied. The thin film samples prepared at different powers are afterwards investigated with SEM, XRD, Hall and thermoelectric measurements. Both crystalline characteristics and thermoelectric properties are compared to study how the power will affect the deposition of bismuth telluride thin films to find a simple approach to synthesize bismuth telluride with higher thermoelectric performance.

The films were deposited on polished glass substrates by radio frequency (RF) sputtering with an electron beam assisted sputtering system (INFOVION, Seoul, Korea) at room temperature with a background pressure of 4.5 × 10−6Torr. A sputter target of Bi2Te3 (diameter: 76.2 mm, thickness: 4 mm, 99.999% purity, Jiangxi Ketai Advanced Material Co., Ltd., Gao’an City, Jiangxi Province, China) was used in the sputtering. The distance between the target and the substrate is 145 mm, and the angle between the axis of the target and that of the substrate is 30°. The growth pressure was set to 5 mTorr by a throttle valve with the Argon gas flow rate at 40 sccm. The sputtering power was set to be 20 W, 30 W, 50 W, and 70 W. The corresponding power density was 0.44 W/cm2, 0.66 W/cm2, 1.10 W/cm2 and 1.54 W/cm2. In order to control the thickness of the films, the growth rates corresponding to the powers were determined first. A step-profiler was used to measure the thickness of sample films prepared under different powers, and the growth rates were calculated. After the preparatory work was done, 300 nm-thick films were deposited under each fixed power condition.
The surface morphology and composition of the films were determined by field emission scanning electron microscopy (FE-SEM) and energy dispersive spectrometer (EDS) (Hitachi S-4800 FE-SEM, Tokyo, Japan). Furthermore, the crystal structure was analyzed with X-ray diffraction (XRD) (BRUKER D8 ADVANCE, Berlin, German). The samples were scanned from 10° to 80° in the θ–2 θ mode.
A Hall Effect measurement system (SWIN Hall 8800, Xinzhu City, Taiwan, China) was used to determine the electrical properties of the samples at room temperature. The sheet resistance was measured with a four-probe method, and the carrier concentration and mobility were tested with the Hall measurement.
The conductivity and Seebeck coefficients were measured over a temperature range from room temperature to 473 K with ZEM-3 (Ulvac Riko Inc., Kanagawa, Japan) system and a self-made zirconium dioxide holder for films. The conductivity was also compared with the result from Hall 8800 test.

In this work, we present a simple and in-situ method to improve the power factor of bismuth telluride samples through the adjustment of deposition power. A series of bismuth telluride films were synthesized by RF sputtering from a single target under different powers of deposition. The morphologies and thermoelectric properties of the samples were measured and compared. It shows that the films deposited under relatively larger power conditions have lower crystallinity and better thermoelectric performance. A maximum power factor of 5.65 × 10−4 W·m−1·K−2 at 470 K is achieved in this work with its Seebeck coefficient being −105 μV/K, but the corresponding ZT are yet to be looked into. The method reported here is simple, cost-saving, and able to be applied and extended to other thermoelectric materials and synthesis methods to control both the crystallinity and thermoelectric performance. 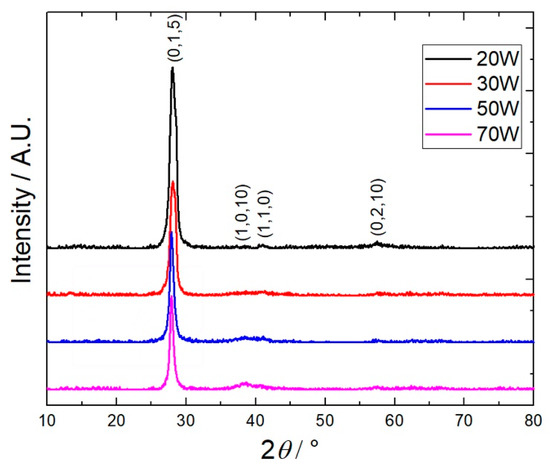 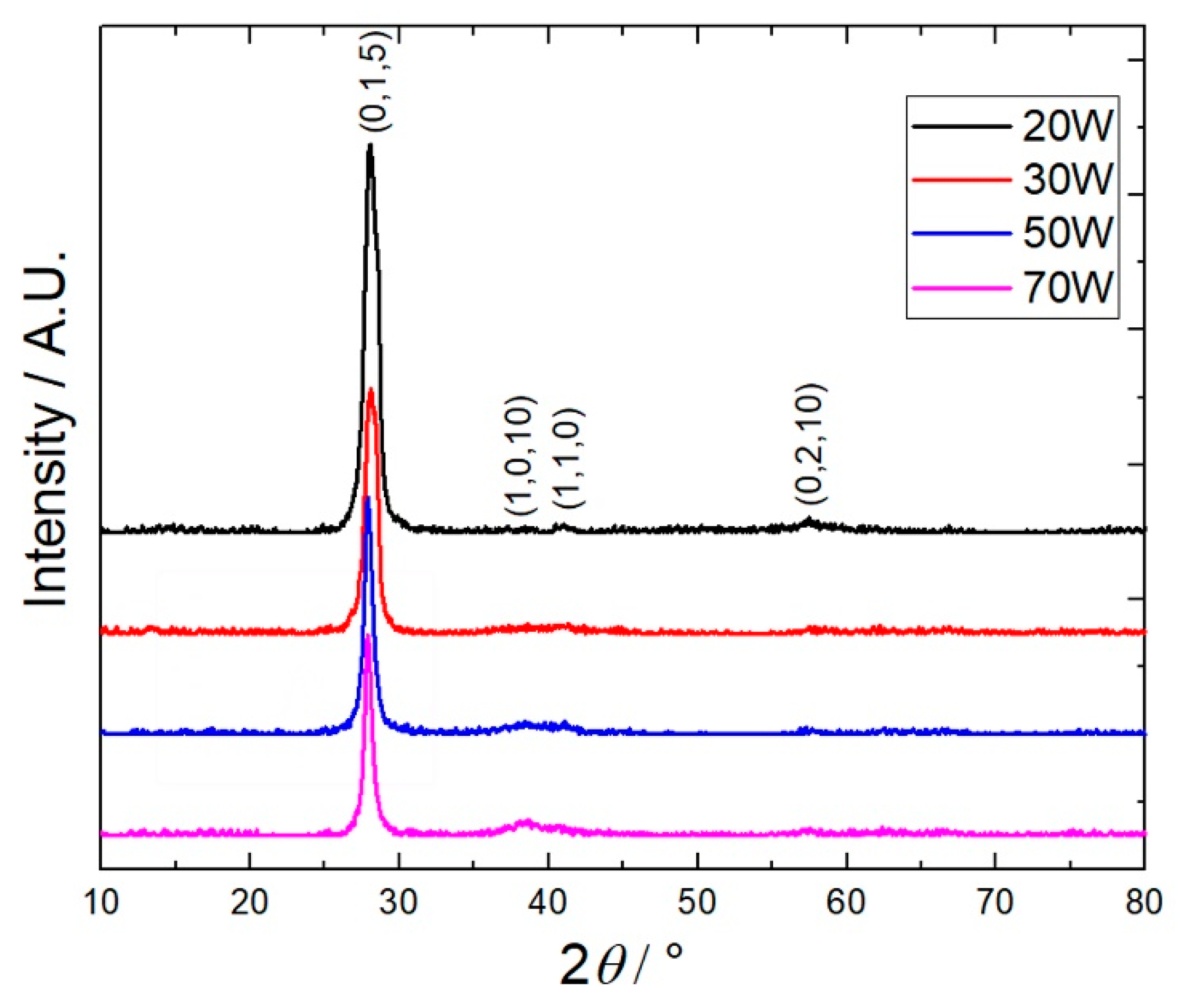 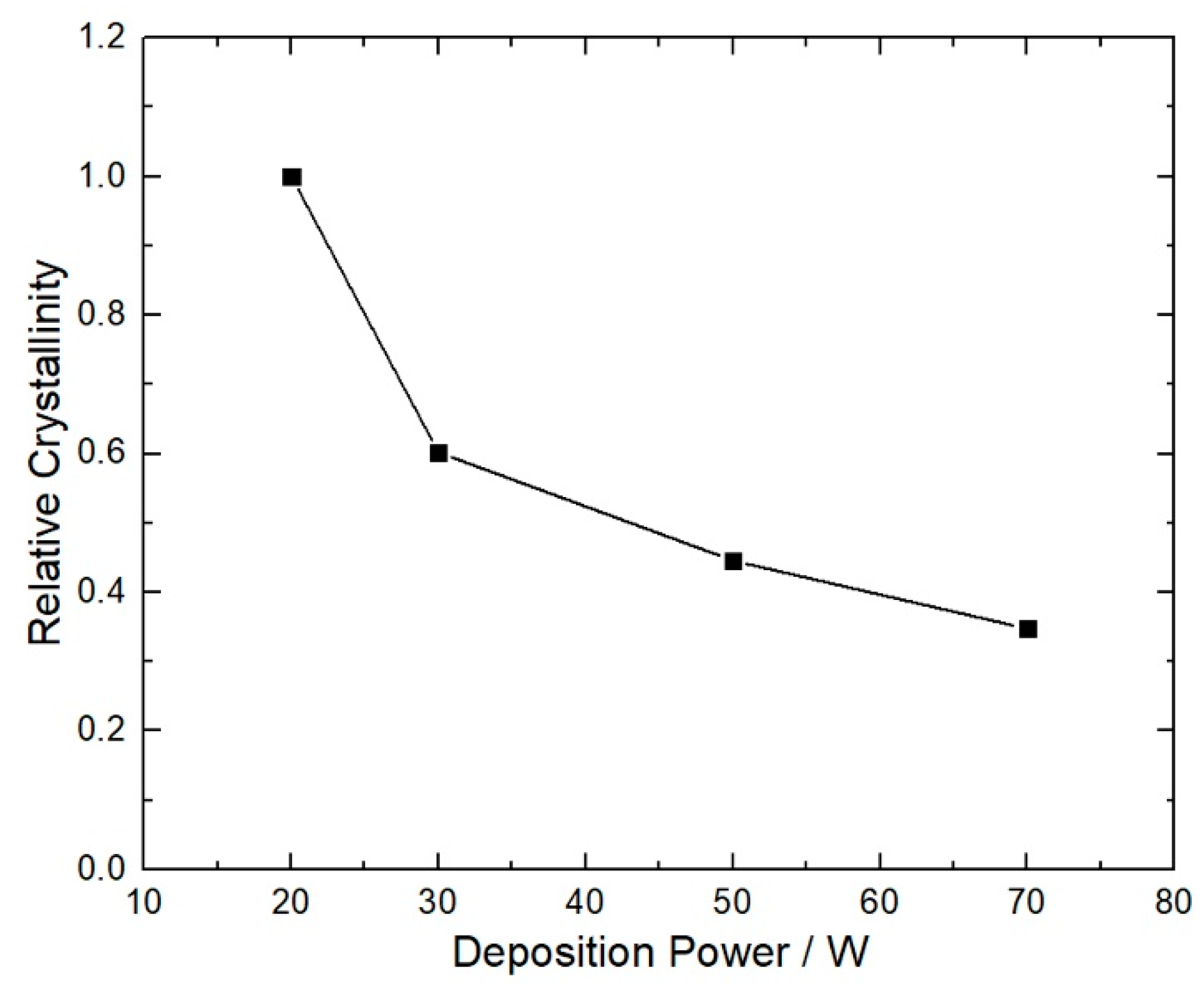 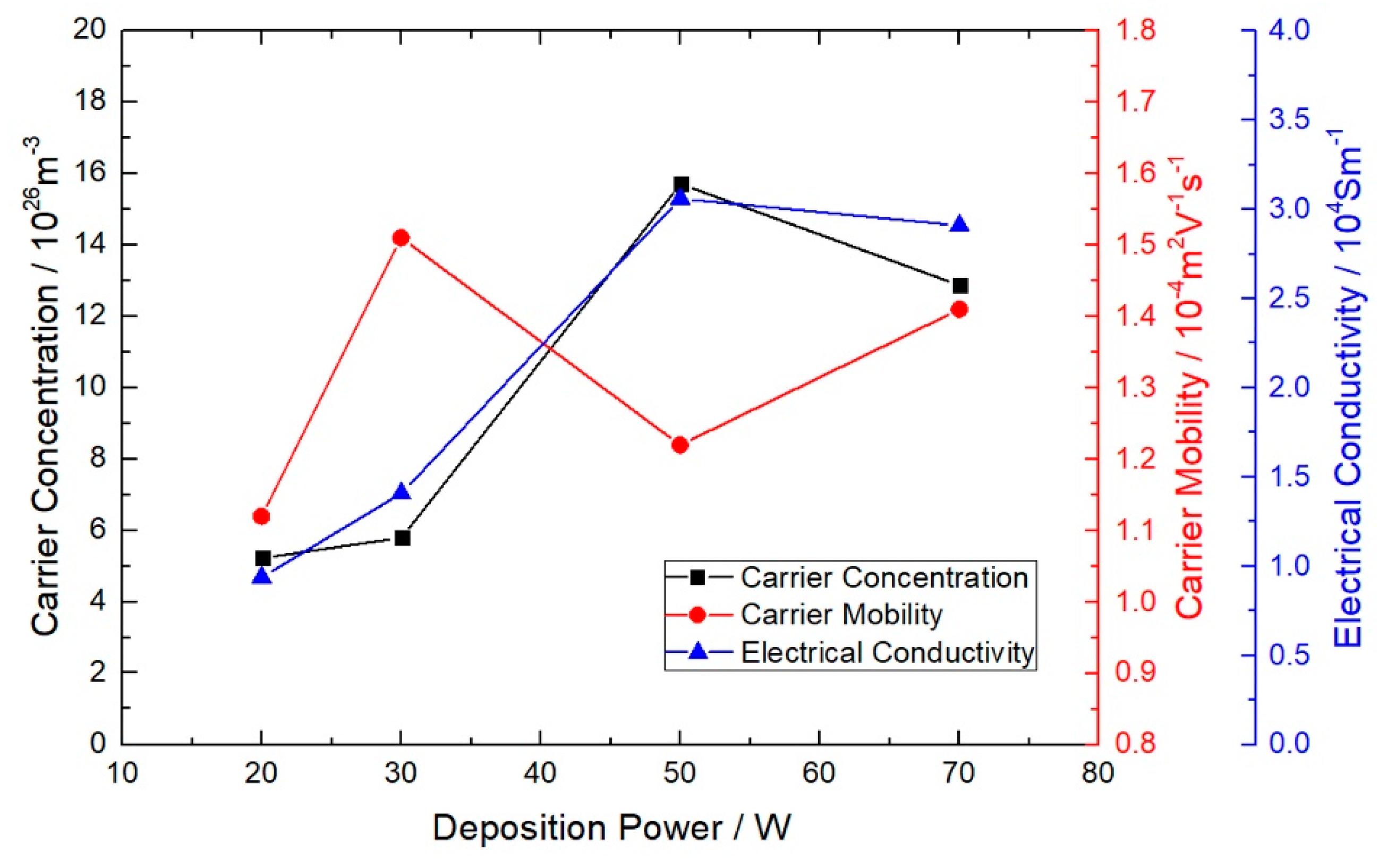 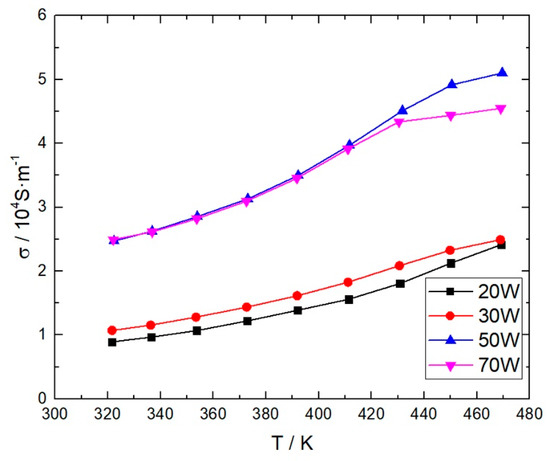 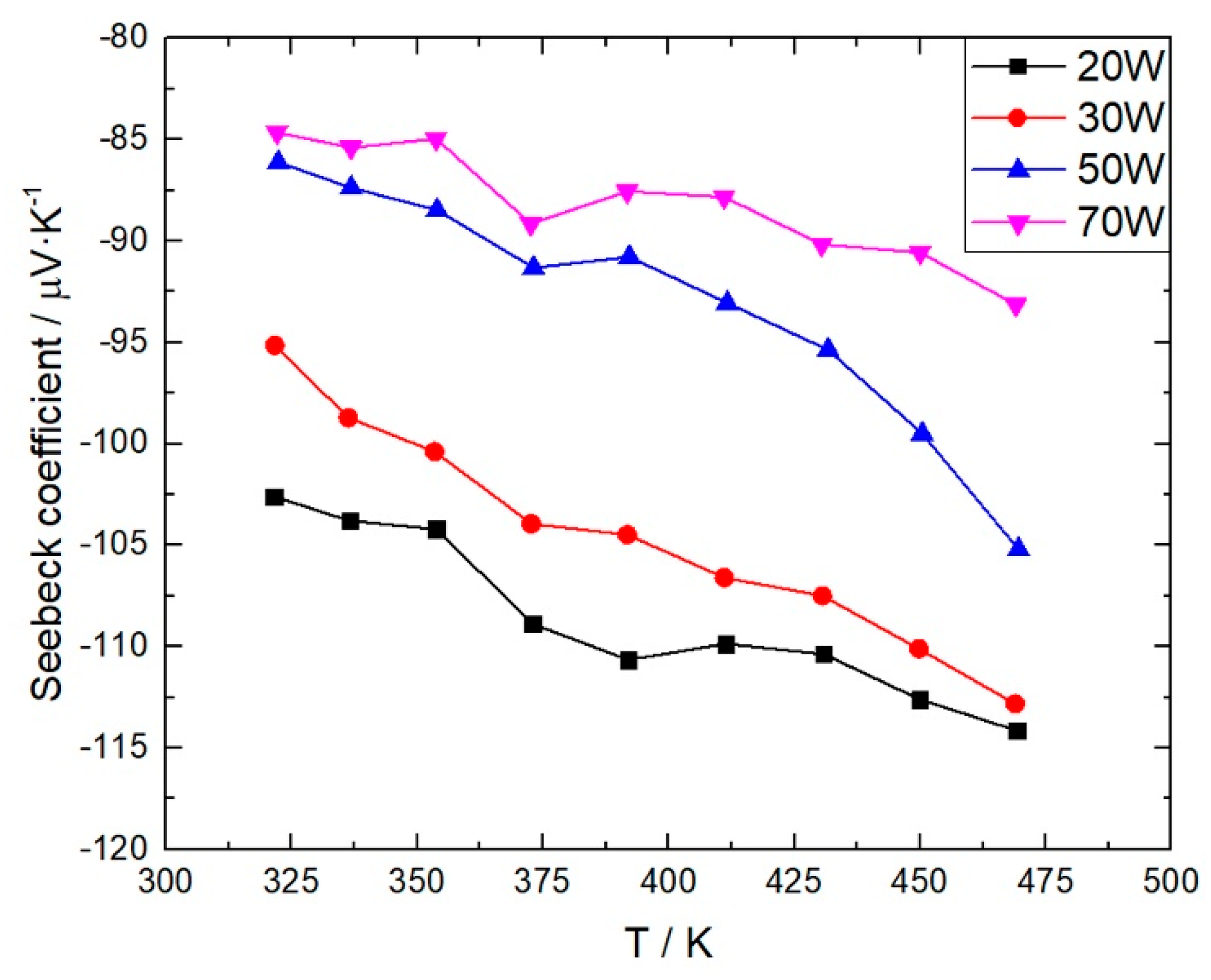 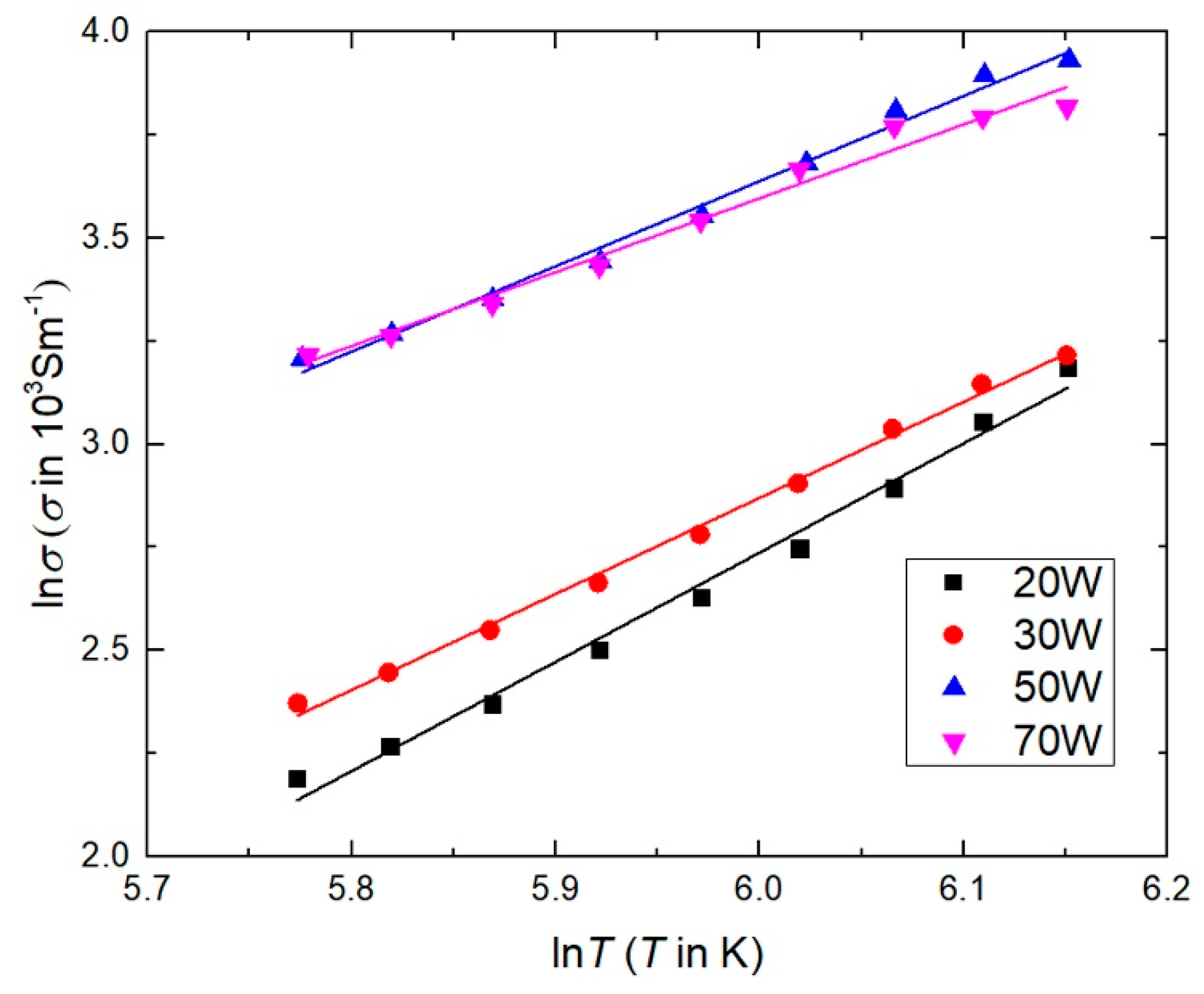 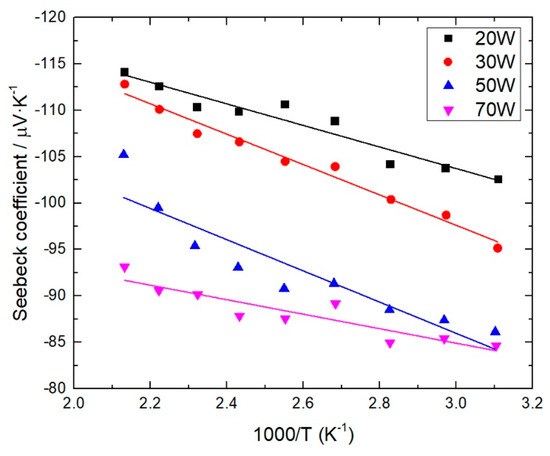 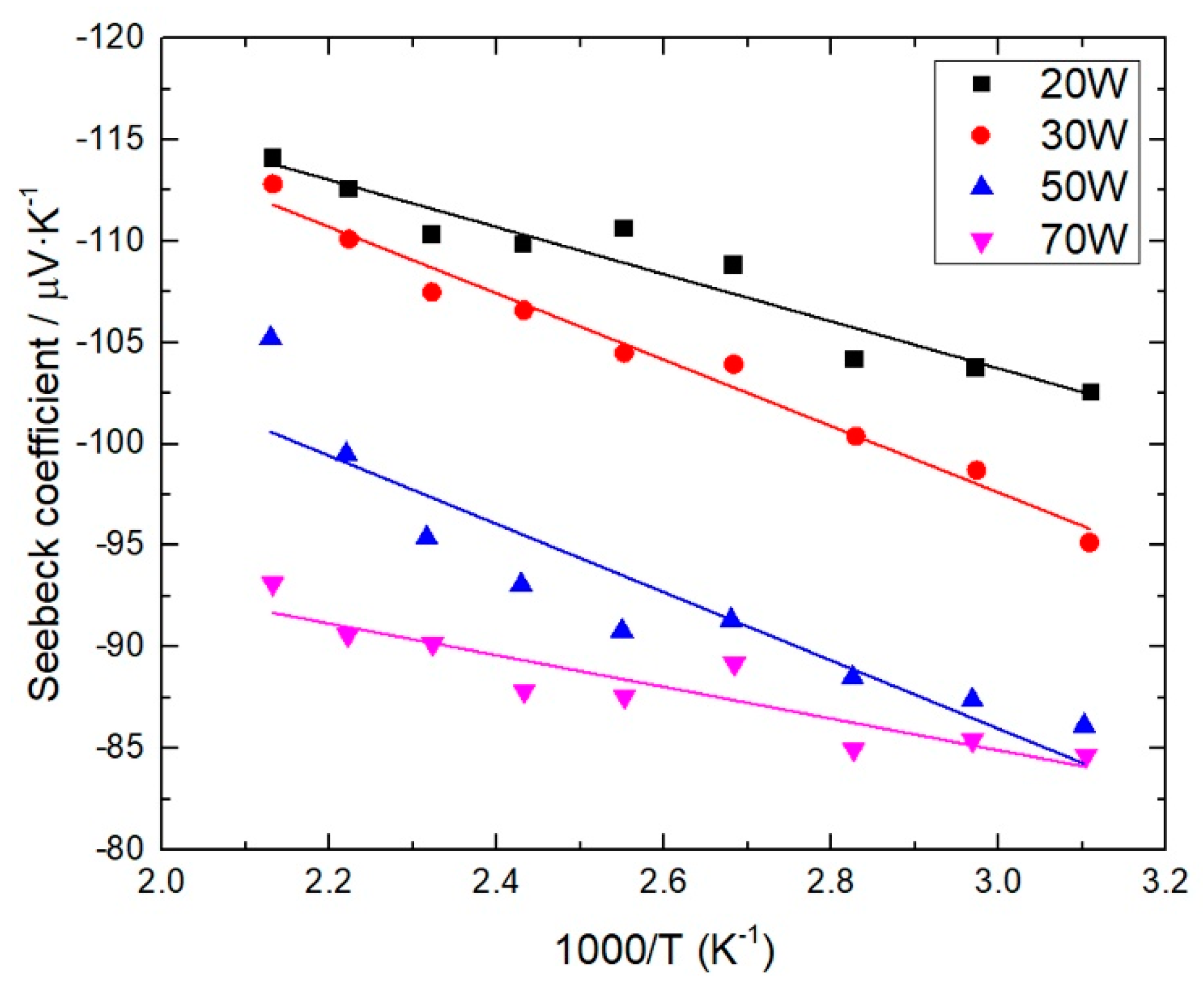 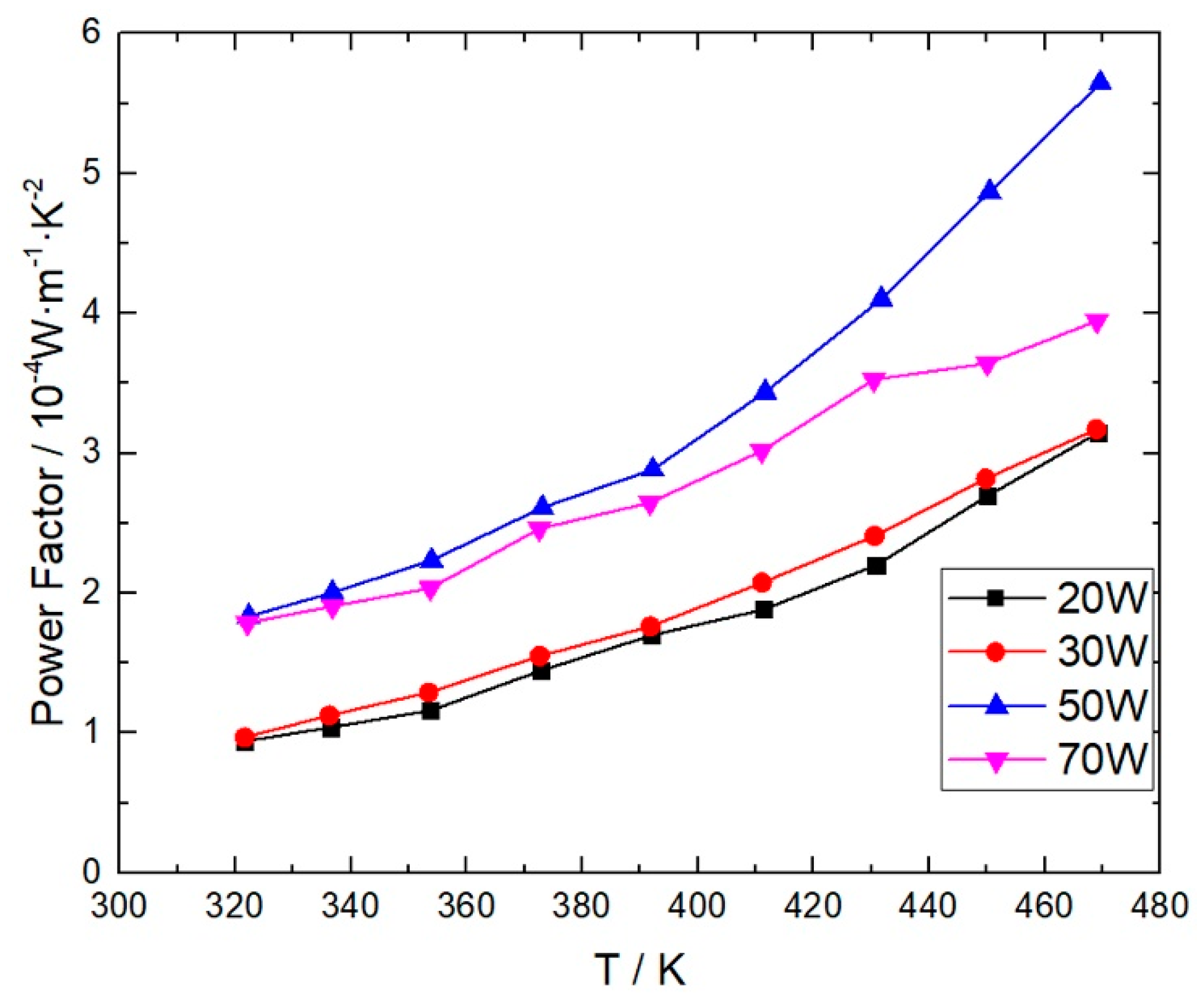