Effects of Mg Content on the Microstructural and Mechanical Properties of Al-4Cu-xMg-0.3Ag Alloys
Previous Article in Journal

Cu–Cr-based alloys are a traditional age-hardening alloy, and are used widely in the fields of contact wires, lead frames and heat exchange because of a good combination of strength properties, electrical conductivity and ductility [1,2]. Alloying element addition [3,4,5], processing, and heat treatment [6,7,8] are major routes to improve performance. Annealing at a specific temperature for precipitation nucleation is an important process to improve the performance, and it is accompanied by a growth of precipitation phases and alloy recovery and recrystallization [9]. However, precipitation and recrystallization growth will lead to a reduction of alloy strength and softening. Yuan et al. [10] found that recovery during aging caused significant softening in the cold-drawn Cu–Cr–Ag alloy. Therefore, to obtain the performance of combining a high strength with a good conductivity, a suitable processing and heat treatment is necessary.
In our previous work [11,12], a Cu–Cr–In alloy type was designed, and elemental In addition to the Cu–Cr alloy was found to yield a strong solid–solution strengthening effect. The alloy exhibits a high strength and good conductivity with facile preparation and production. Chen et al. [12] found that the dislocation density and strength increment vary with the different aging and cold-drawing processes. The recovery and recrystallization behavior of the alloy affects the alloy strength at a high service temperature, as well as the selection of processing technique and heat-treatment process. This study aimed to research the properties and microstructure evolution of the Cu–Cr–In alloy during annealing and determined the alloy recrystallization kinetics. The effects of indium addition on softening resistance have been evaluated. The goal of this study was to reveal the thermal-softening mechanisms by analyzing the microstructure and mechanical properties of cold-drawn Cu–Cr–Sn alloy during annealing, and to enhance the softening resistance of the Cu–Cr–In alloy.

Cathode copper (99.95 wt.%), pure indium (99.95 wt.%) and Cu–8 wt.% Cr master-alloy were used as raw materials. The Cu–Cr–In alloy ingots were prepared by iron casting in a medium-frequency induction furnace (ZP-45, Jiangyin Ruibang, Jiangyin, China). The composition of the as-cast ingot (see Table 1) was determined via inductively coupled plasma emission spectroscopy (ICP, IRIS Intrepid II, Thermo Fisher Scientific, Waltham, MA, USA). After being cleaned, the 80-mm-diameter as-cast ingots were homogenized at 900 °C for 1 h, and then extruded into 13-mm diameter rods. The Cu–Cr–In rods were processed via the following route: extrusion rods (13-mm diameter) → first-time cold drawing (7-mm diameter) → solid–solution → second-time cold drawing (4.5-mm diameter). Cold drawing was conducted with a drawing bench (LW-10, Suzhou Weihan, Suzhou, China), and the macroscopic strains after the first and second cold drawing were 68% and 60%, respectively. Wires that had been cold-drawn for the first time were annealed at 950 °C for 1 h followed by rapid water quenching. The 60% cold-drawn Cu–Cr–In alloy was annealed between 450 °C and 700 °C for between 0 min and 600 min in a resistance furnace (SX2-18-18, Shanghai Shiyan, Shanghai, China).
The microhardness was measured using a digital microhardness tester (200HVS-5, Laizhou Huayin, Yantai, China) with a load of 500 g, and ten measurements were performed for each point. The alloy sample microstructure was observed using optical microscopy (OM, BMM90AE, Shanghai Bimu, Shanghai, China), scanning electron microscopy (SEM, MLA650F, FEI Company, Hillsboro, OR, USA), electron backscatter diffraction (EBSD, Zeiss-SIGMA, Zeiss, Jena, Germany) and transmission electron microscopy (TEM, Tecnai G2-20, FEI Company, Hillsboro, OR, USA). The alloy subgrain and grain substructure were quantified from the SEM-BSE micrographs, the images were analyzed at a magnification of 1000 and the EBSD orientation maps were obtained with a step size of 1.5 μm. The surface crystallographic orientation and structure data were analyzed using the HKL-Channel 5 software. The low- and high-angle grain boundaries were set to and , respectively, and the grain misorientation was the criterion that was used to understand the structural evolution. Information on the crystal structure was collected by X-ray diffractometry (XRD, Xpert powder, PANalytical B.V., Almelo, The Netherlands) with Cu-Kα radiation, a tube voltage of 40 kV and a current of 250 mA. The continuous scanning mode ranged from 20 to 100 at 1°/min.

This work is financially supported by the National Key Research and Development Program of China (Grant No. 2016YFB0301400) and Scientific Start-up Research for High-level Talents of Jiangxi University of Science and Technology.

Thanks are also given to Wenjing Wang for their help. 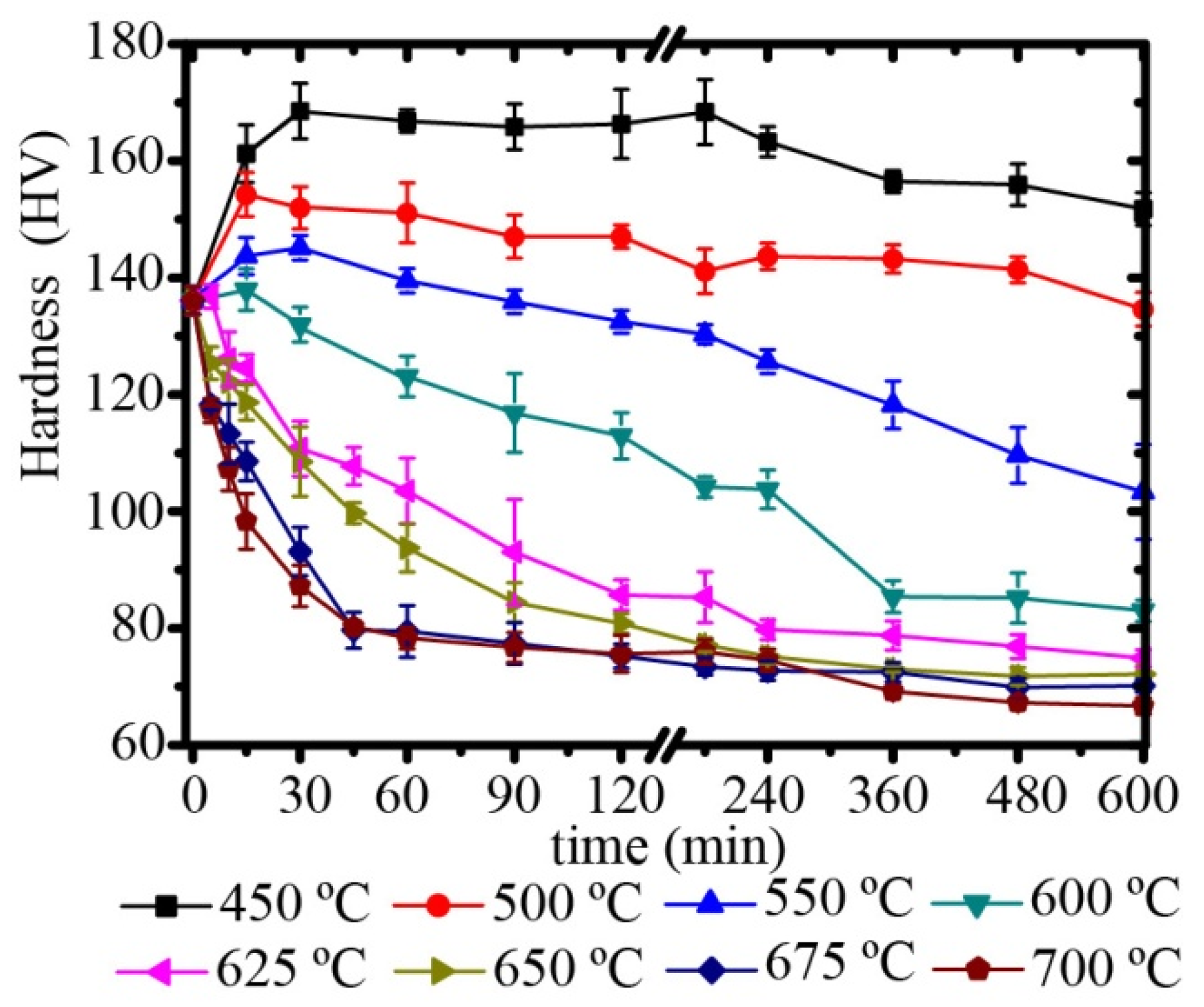 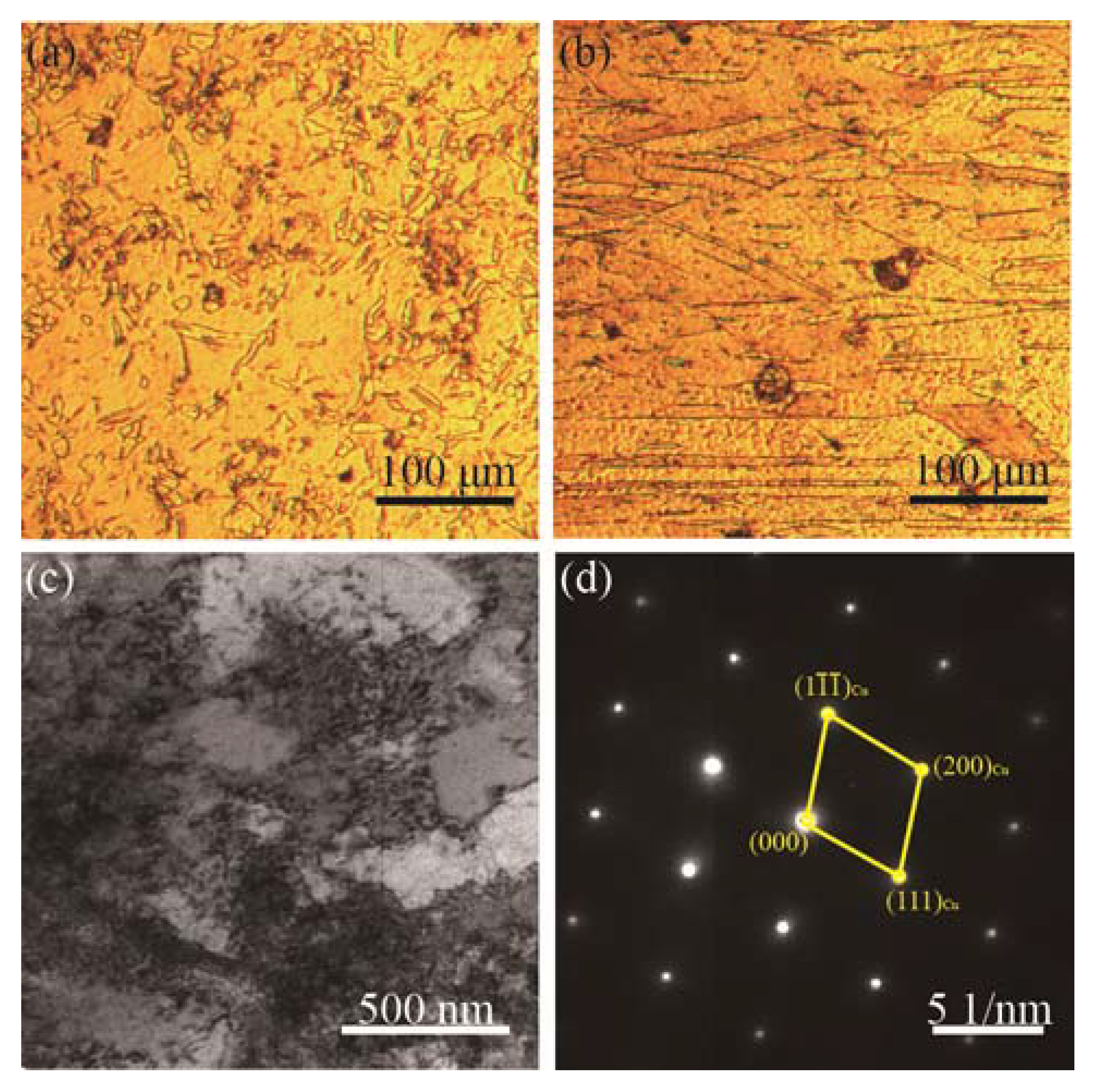 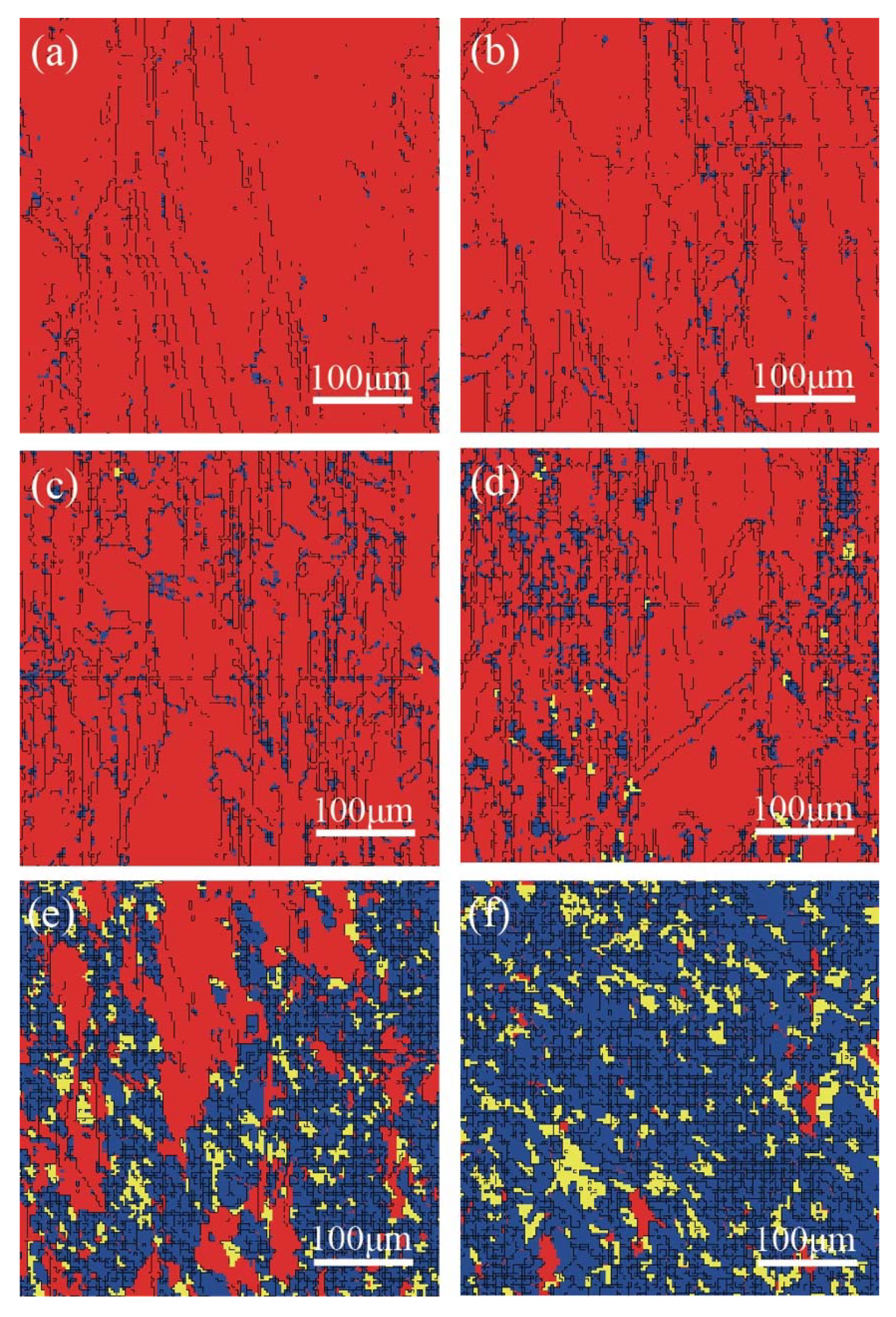 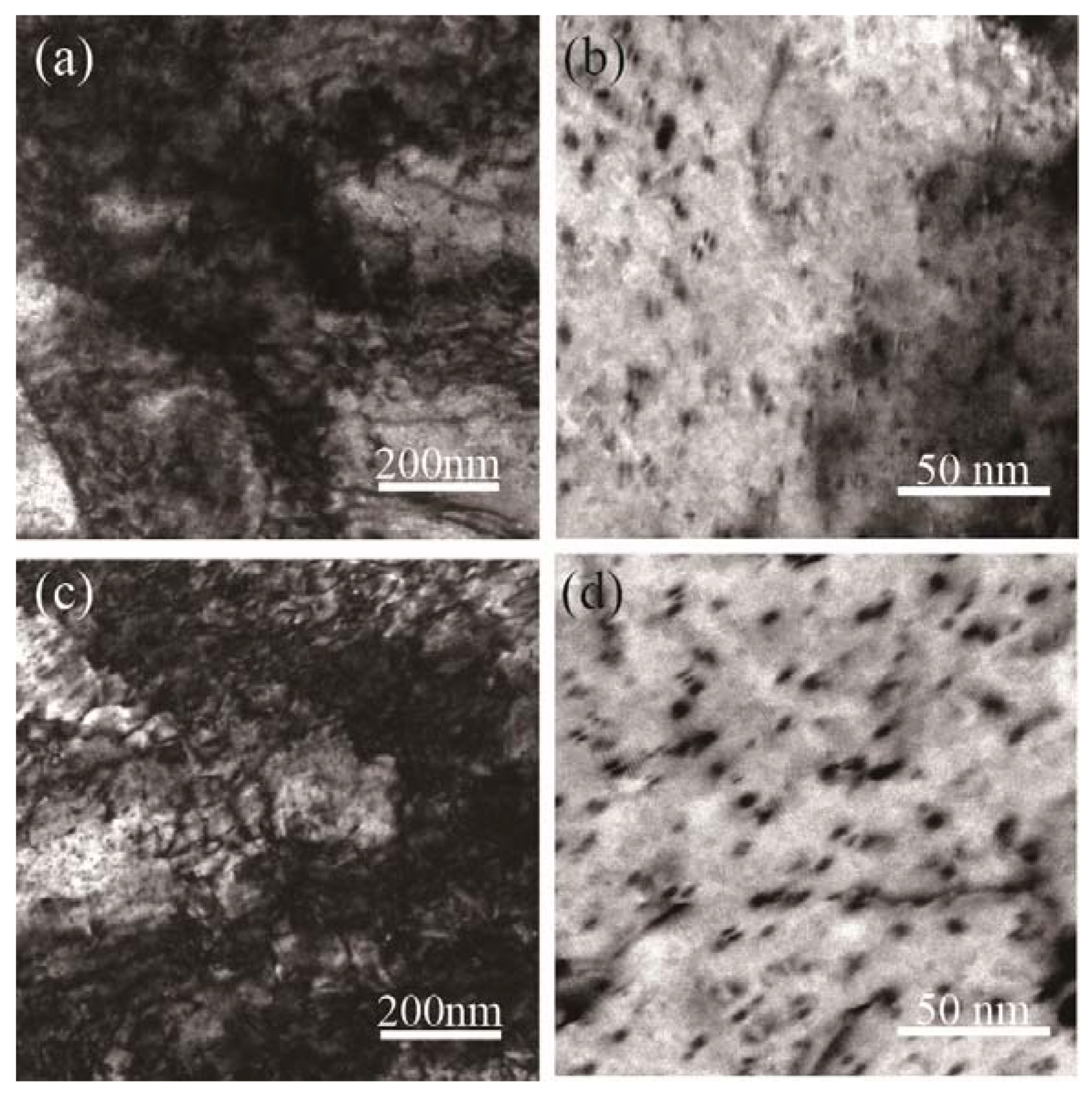 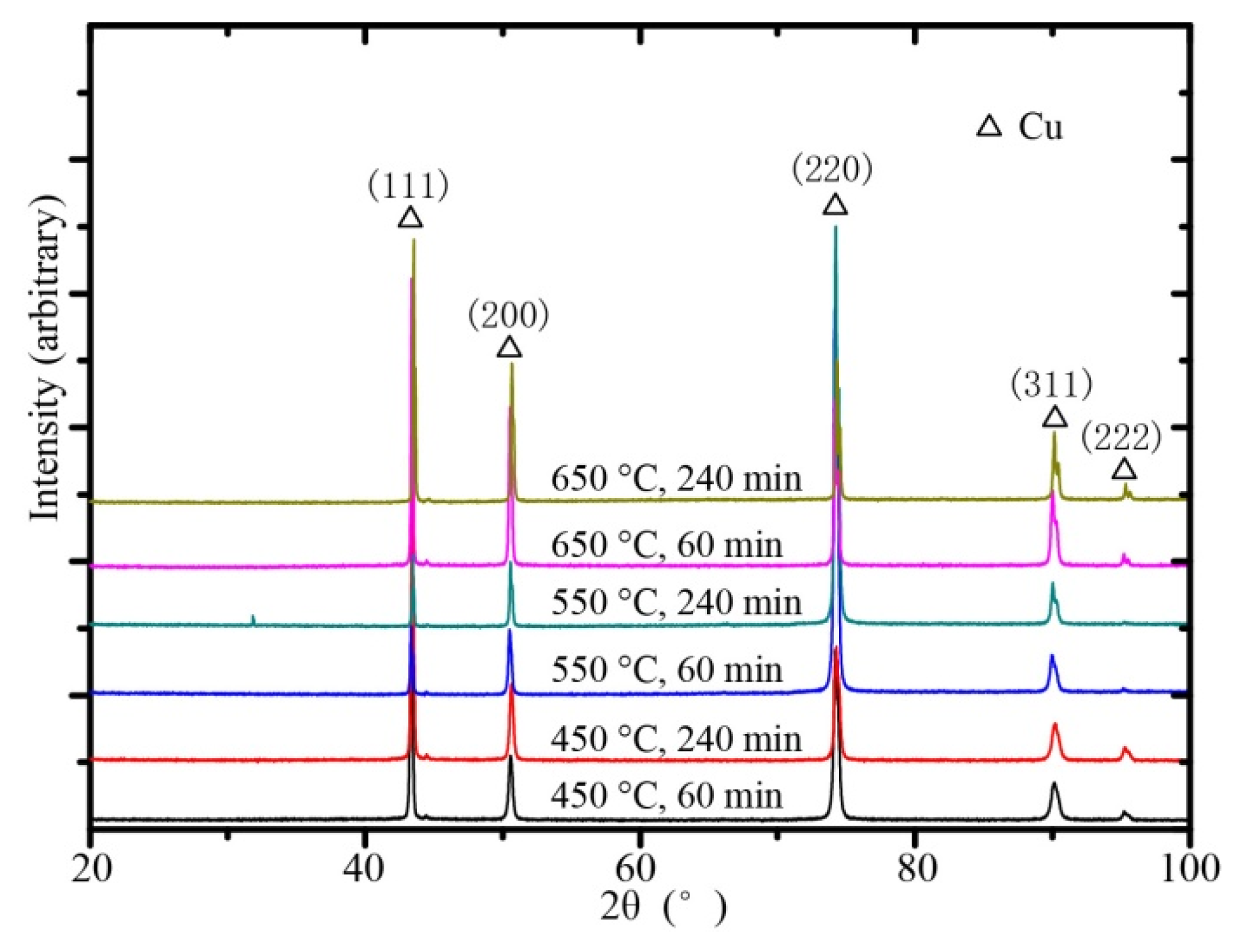 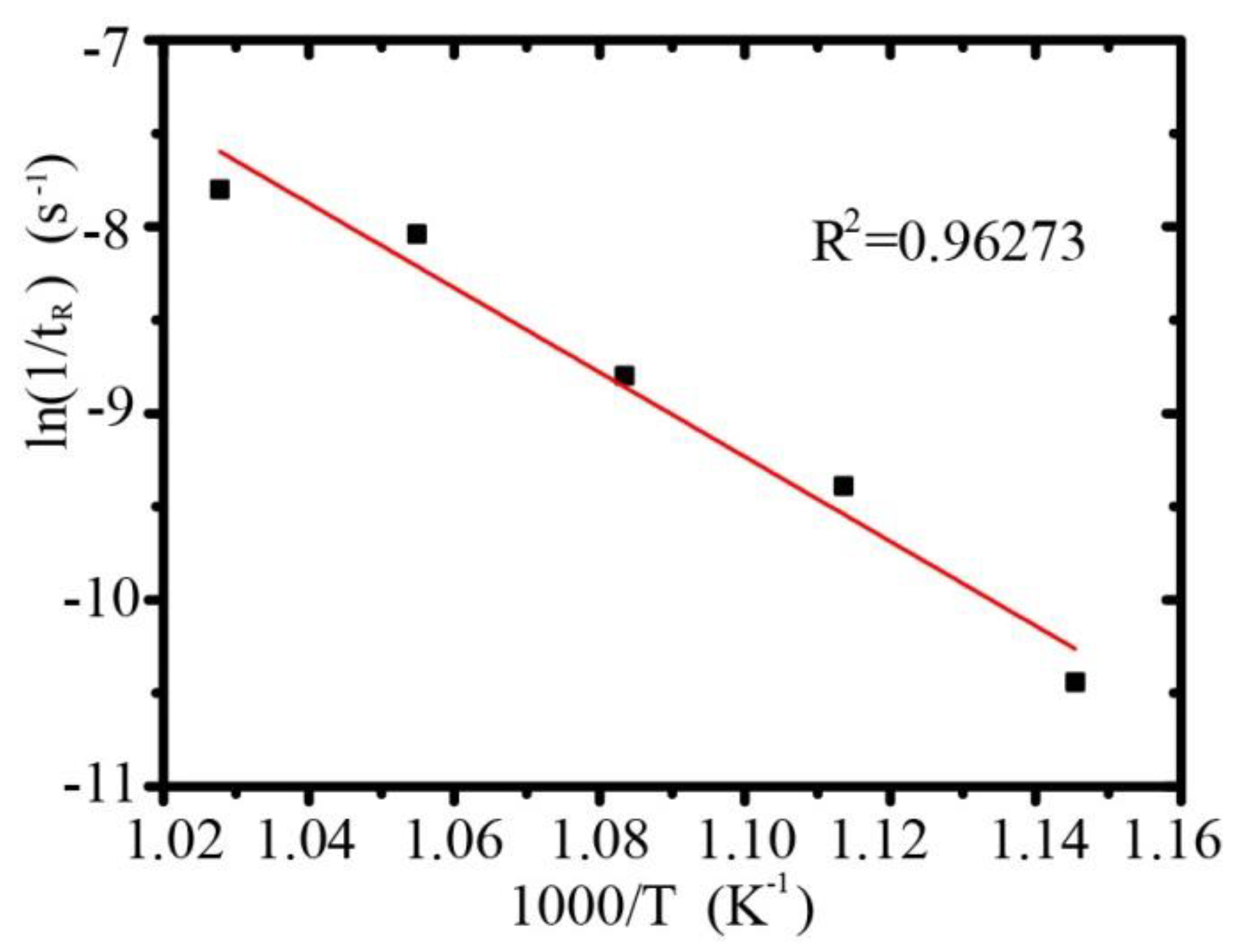