Enhancing the Solubility and Dissolution Performance of Safinamide Using Salts

Approximate 40% of drug candidates fail during the late stages of drug discovery owing to their poor water solubility and intrinsic dissolution rate (IDR) [1,2]. Recently, many methods have been developed, such as solid dispersion [3], nanocrystals [4], cocrystal [5,6,7], salts [8,9,10], to improve the water solubility of poorly soluble drugs [11]. One of the key challenges is to improve the solubility of poorly soluble drugs without changing their other properties, including stability, covalent bonding structures, mechanical properties, and pharmacological behaviors. The formation of salts is a well-established approach for tailoring the physicochemical properties of drugs without altering the drug molecule [12,13,14,15,16,17,18,19,20,21].
Safinamide (SAF, Figure 1) is an anti-Parkinson’s disease drug with selective monoamine oxidase type-B inhibition activity [22,23,24,25,26]. Safinamide is a Biopharmaceutics Classification System (BCS) II drug with low solubility and high permeability, and it has been commercialized in its salt form, safinamide mesylate (marketed as Xadago) and was approved, in 2017, by the U.S. Food and Drug Administration. To date, there have been no relevant studies undertaken on the crystal structure and physicochemical properties of cocrystals and salts of safinamide. In the present study, a series of conformers containing organic and inorganic acids were used to interact with safinamide (Supplementary Materials Table S1), and four novel salts of safinamide with hydrochloric acid (HCl), hydrobromic acid (HBr), and maleic acid (MA) were prepared and characterized, and their solubilities, IDRs and stability were evaluated. The results indicated that all novel salts had improved solubilities and IDRs.

Safinamide (SAF) was purchased from Shanghai BioChemPartner Co. Ltd. (Shanghai, China). The coformers HCl, HBr, and MA were purchased from Aladdin Biochemical Technology Co. Ltd. (Shanghai, China). All solvents used were purchased from Ghtech Co. Ltd. (Guangzhou, China). The data from the X-ray diffraction of the powdered chemicals were measured using a powder diffractometer model D8 ADVANCE (Karlsruhe, Germany) with a tube of Cu Kα radiation (λ = 1.5418 Å) at 40 mA and 40 kV and data were collected within the range of 3–60°. Differential scanning calorimetry (DSC) was performed on a Mettler-Toledo machine at a rate of heating of 10 °C/min within the range of 25–250 °C under nitrogen flow at a rate of 20 mL/min. Thermogravimetric (TG) analysis was performed on a Perkin-Elmer TGA 4000 (Shanghai, China) equipment with a heating rate of 10 °C/min in the 25–500 °C range under nitrogen flow at a rate of 20 mL/min. All single crystal X-ray diffraction (SCXRD) data were collected on a Bruker Apex II CCD diffractometer (Karlsruhe, Germany) with Mo Kα radiation (λ = 0.71073 Å) at 293 K. The X-ray generator was operated at 50 kV and 30 mA. All the structures were solved by direct methods and refined using SHELX-97 (SHELX97 version) [27,28]. All atoms were placed at the geometrically calculated positions, except for the O–H and N–H hydrogen atoms. The crystallographic parameters of all the salts are summarized in Table 1 and the hydrogen bonds are listed in Table 2.

Previous studies on the solubility of SAF and related salts have been conducted using the excessive powder dissolution method [29]. SAF absorbance was determined at a wavelength λmax = 225 nm in water and phosphate buffer (pH 6.86) solutions. The curve of intensity versus the concentration calibration was plotted using this absorbance value for the SAF and related salts. For the solubility experiments, excessive safinamide and its salts were placed in water and pH 6.86 phosphate buffer medium, respectively. In all solubility experiments, the solutions were stirred at a speed of 500 rpm using a magnetic stirrer at a temperature of 37 °C and the stirring process lasted for 24 h. During the process, subsamples (5 mL) were removed and filtered using membrane filters (0.22 μm). Then, based on UV-spectroscopy, the absorbance was determined. The undissolved residues were vacuum dried and further characterized by powder X-ray diffraction (PXRD). All tests were repeated six times.
The IDRs of the SAF and its related salts were determined using a PJ-3 LAB Tablet Four-Usage Tester (Tianjin Guoming Medical Equipment Co. LTD (Tianjin, China)). A total of 150 mg sample (SAF and its salts) was compressed with a smooth surface by applying a pressure of 1.8 MPa for 5 min in an area of 1.3 cm2. The pellets were dipped in a dissolution medium (500 mL), i.e., water or pH 6.86 phosphate buffer medium. The temperature was set at 37 °C and a rotating paddle was used to stir the medium at 100 rpm. The dissolution medium (5 mL) was withdrawn at the following intervals: 5, 10, 15, 20, 30, 45, 60, 90, and 120 min, and replaced each time with the same amount of fresh medium. Samples were filtered through 0.22 μm membrane filters, and then the absorbance was determined using a UV-spectroscopy. All tests were performed in triplicate.

The PXRD diffractograms of SAF, SAF-HCl, SAF-HBr, SAF-MA and SAF-MA-H2O are shown in Figure 6. The results demonstrated that the experimental patterns were consistent with the simulated patterns calculated by Mercury using the refined single crystal X-ray data.

Differential scanning calorimetry and thermogravimetry methods are usually employed to assess the thermodynamic stability of solid forms. Herein, the DSC and TG curves of SAF and all salts are shown in Figure 7 and Figure S1. The DSC curves of SAF, SAF-HCl, SAF-HBr, and SAF-MA showed an endothermic peak at 136 °C, 231 °C, 228 °C, and 182 °C, respectively, with the temperature attributed to the melting point of the solid forms. The DSC curve of SAF-MA-H2O exhibited abroad peak in the range of 50–110 °C, which may be attributed to the release of water in the crystal cell. Another endothermic peak at 182 °C was observed, which was assigned to the melting point of SAF-MA-H2O. The TG curves of SAF, SAF-HCl, SAF-HBr, and SAF-MA began to decompose with the formation of volatile compound(s) at 200 °C, 224 °C, 222 °C, and 177 °C, respectively. The TG curves of SAF-MA-H2O showed a weight loss of 4.38% at the range of 50–110 °C, which was attributed to water loss (calculated 4.13%). SAF-MA-H2O began to decompose at 177 °C, which meant that the melting observed was a melting/degradation due to the fact that the baseline was not reached after the phase transition, and then we continued the TGA experiments that confirmed the decomposition phenomenon.

Drug stability is an important index for evaluating drug shelf life. The accelerated stability tests of SAF and all four salts under different humidity conditions (25 °C/75%, 25 °C/85%, 25 °C/97%) were tested for 14 days. The results from the PXRD analysis indicated that all salts except SAF-MA had good stability under the three humidity conditions (Figures S9–S12). However, the SAF-MA salt was not stable at high humidity (Figure S13) and some of this salt transformed to SAF-MA-H2O. The evidence for this was the characteristic peaks at 7.96, 11.16, 15.76 and 16.22°, which were attributed to the SAF-MA-H2O salt.

In summary, four pharmaceutical salts of anti-Parkinson’s disease drug safinamide were successfully synthesized and characterized using slow solvent evaporation techniques. The crystal structures and physicochemical properties of these salts were investigated. The solubility studies revealed that SAF-HCl, SAF-HBr, and SAF-MA-H2O salts improved the solubility of this API in water and phosphate buffer (pH 6.86). All salt forms exhibited better dissolution rates than that of SAF. Furthermore, SAF-MA salt completely transformed to SAF-MA-H2O in water and phosphate buffer (pH 6.86). The accelerated stability tests indicated that all salts, except SAF-MA, had good stability. Considering the solubility, dissolution rate, and stability advantages, SAF-HCl, SAF-HBr, and SAF-MA-H2O salts have the potential to be developed into effective oral preparations. 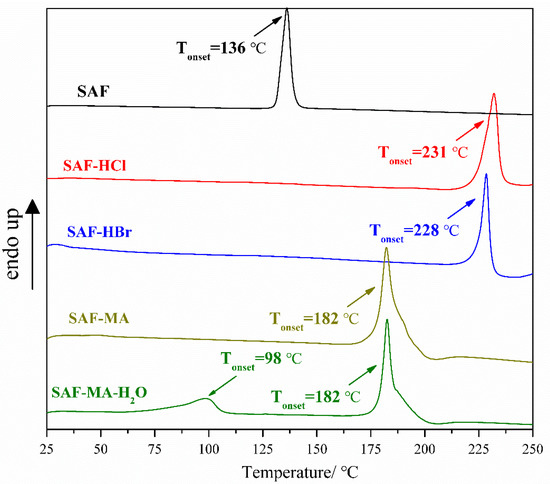 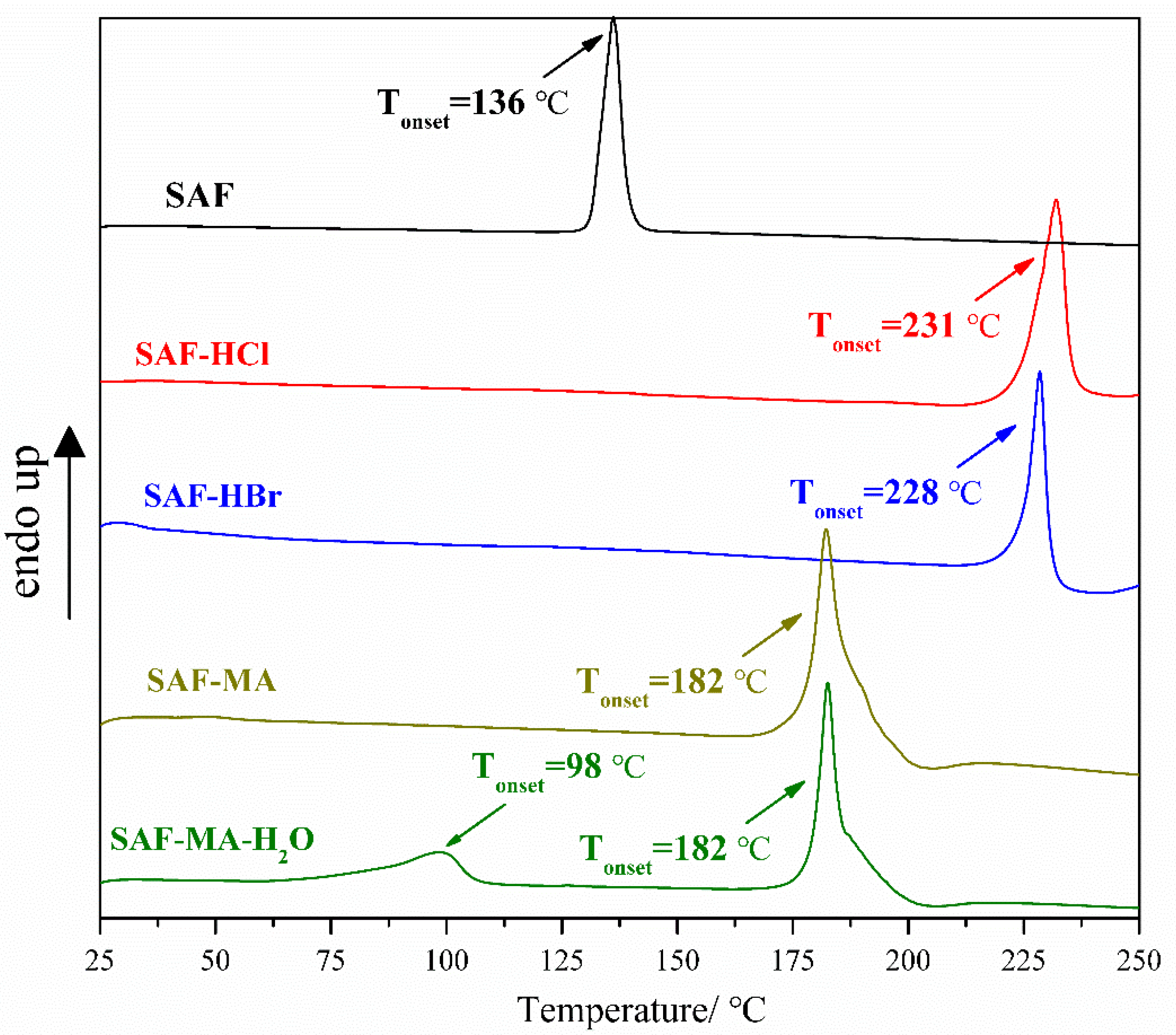 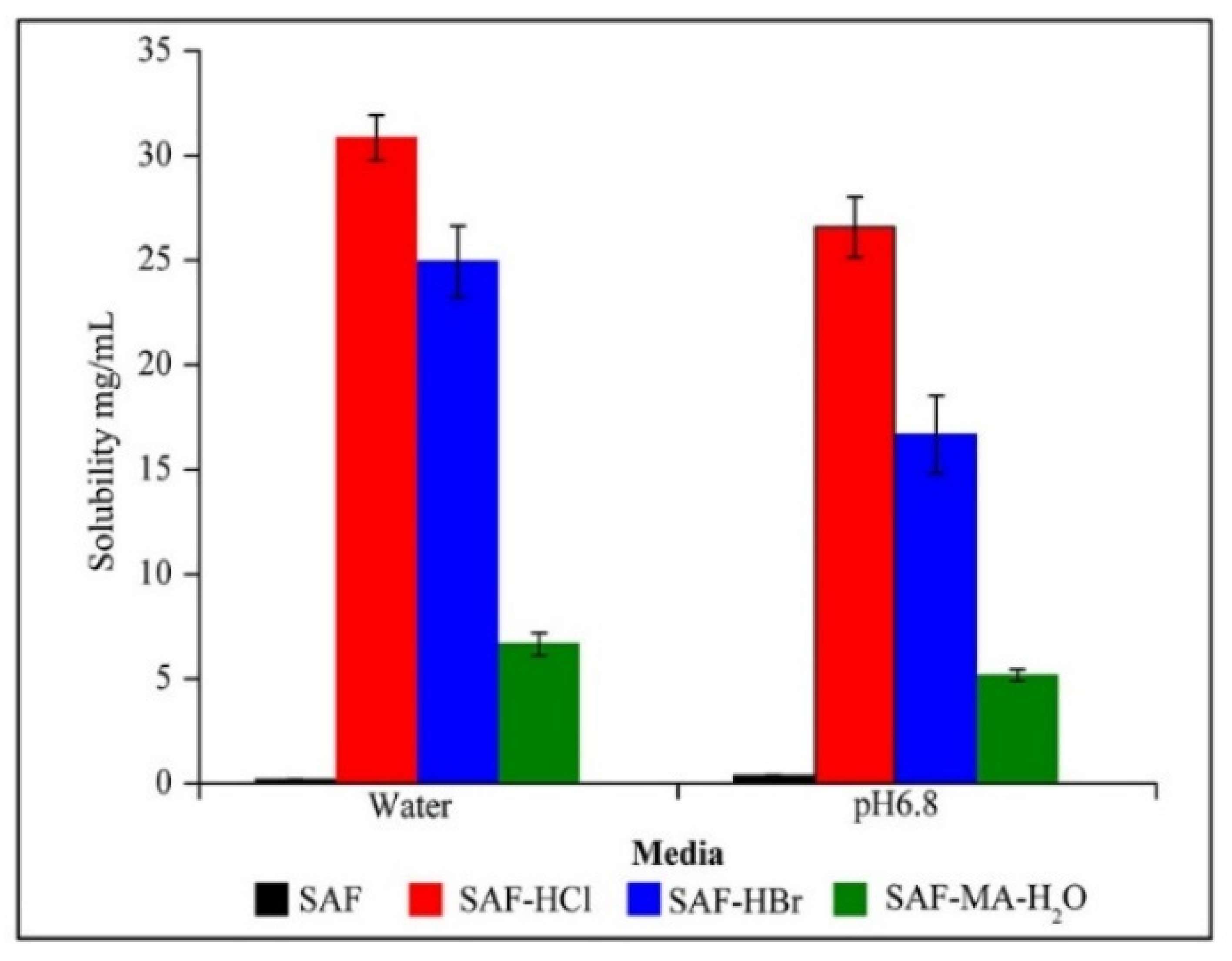