The gel of zeolite NaY has potential as a precursor of other zeolites. The particular interest in this work is to convert the gel of NaY to NaP2. We found that the pure phase NaP2 can be produced simply by the conventional hydrothermal (CH) method at 150 °C for 24 h. This NaP2 sample, named CH150, has an average particle size of 10.3 µm and an Si/Al ratio of 1.82. In the case of single crystallization via microwave-assisted hydrothermal (MH) method, various parameters were studied, including the crystallization temperature (90, 150, 175 °C) and time (15, 30, 45, 60 min). The samples were analyzed by X-ray diffraction and scanning electron microscopy. However, mixed phases of P1 and P2 or ANA were obtained from all samples. Another attempt was made by a double crystallization via MH method as followed: at 90 °C for 1 h, quickly cooled down to room temperature in the microwave chamber and aged for 23 h, and finally at 150 °C for 1 h. The sample, named MH90A150, has an average crystal size of 16.45 µm and an Si/Al ratio of 1.85. The high Al content of NaP2 in both samples (CH150 and MH90A150) could lead to interesting applications. View Full-Text
Keywords: NaP2 zeolite; NaY gel; microwave-assisted hydrothermal; conventional hydrothermal NaP2 zeolite; NaY gel; microwave-assisted hydrothermal; conventional hydrothermal
►▼ Show Figures 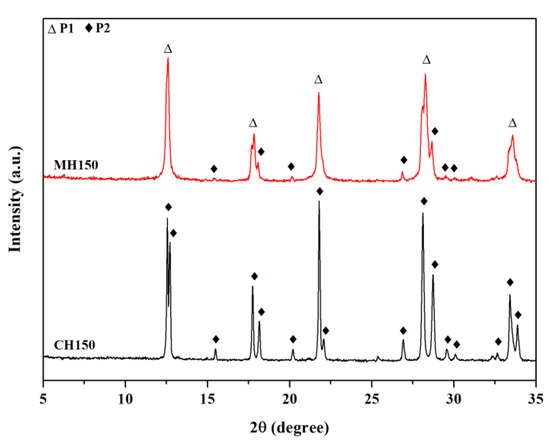