Activation, Deactivation and Reversibility Phenomena in Homogeneous Catalysis: A Showcase Based on the Chemistry of Rhodium/Phosphine Catalysts
Previous Article in Special Issue

In this work, we employed a step-by-step sol-gel process to controllably deposit ultra-thin layers of SiO2 on anatase nanoparticles in the range between 0 and 1 nm. The deposition was confirmed by TEM, EDX, and ATR-FTIR (e.g., Ti-O-Si band at 960 cm-1. Zeta potential measurements unravelled a continuous change in surface charge density with increasing silica shell thickness. The photocatalysts were evaluated towards adsorption and degradation of positively-charged and negatively-charged dyes (methylene blue, methyl orange) under UV illumination. The growth mechanism follows the Stranski–Krastanov model with three thickness regimes: (a) Flat islands (first step), (b) mono/bilayers (second/third step), and (c) regular thick films (fourth/fifth step). The results suggest different rate limiting processes for these regimes: (a) For the thinnest scenario, acidic triple-phase boundaries (TPBs) increase the activity for both dyes with their accessibility being the rate limiting step; (b) for continuous mono/bilayers, dye adsorption on the negatively-charged SiO2 shells becomes the rate liming step, which leads to a stark increase in activity for the positively-charged MB and a decrease for MO; (c) for thicker shells, the activity decreases for both dyes and is limited by the charge transport through the isolating shells. View Full-Text
Keywords: dye degradation; core-shell; photocatalyst; titania; reaction mechanism dye degradation; core-shell; photocatalyst; titania; reaction mechanism
►▼ Show Figures 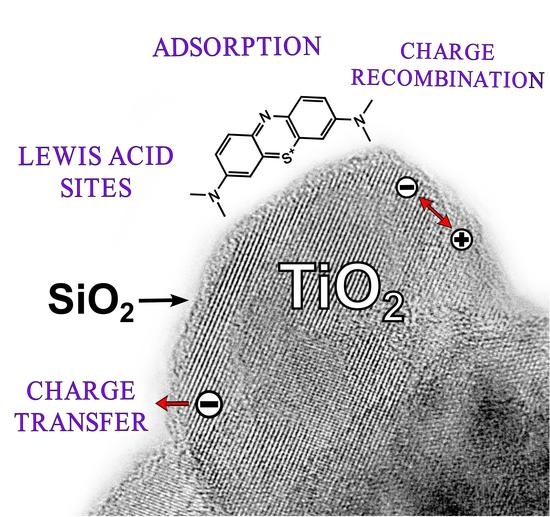