Nickel catalysts supported on homemade CeO2 oxide were prepared by two procedures intending to achieve different degree of metal-support interaction. One method consisted of a co-precipitation that was assisted by microwave; the other method was based on a modified wetness impregnation in the presence of the organic complexing ligand, nitrilotriacetic acid (NTA). The support and catalysts were characterized by temperature programmed reduction (TPR), X-ray diffraction (XRD), and X-ray photoelectron spectroscopy (XPS) techniques. Significant differences in the structure, in redox properties and in the elemental surface composition emerged. The catalytic behavior in the partial oxidation of methane was tested at atmospheric pressure, in a range of temperature between 400–800 °C, using diluted feed gas mixture with CH4/O2 = 2 and GHSV= 60,000 mL g−1 h−1. Moreover, the effect of the catalyst reduction pretreatment was investigated. The better catalytic performance of the microwave-assisted sample as compared to the NTA prepared sample was attributed to the stronger interaction of nickel with CeO2. Indeed, according to the structural and reducibility results, an adequate electronic contact between the metal and the support favors the formation of oxygen vacancies of ceria and inhibits the sintering of the catalyst active species, with an improvement of the catalytic performance. View Full-Text
Keywords: NiCeO2 catalysts; catalytic partial oxidation (CPO); Methane; metal–support interaction NiCeO2 catalysts; catalytic partial oxidation (CPO); Methane; metal–support interaction
►▼ Show Figures 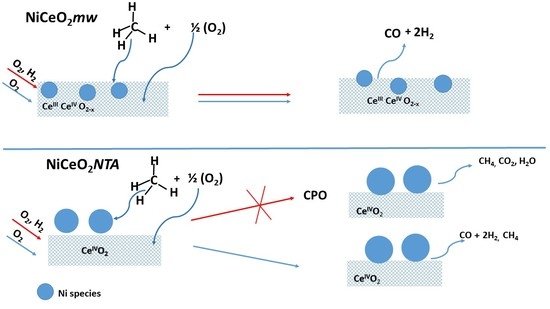