Amphiphilic phosphotungstic acid (A-PTA) and Ni2P/SBA-15 catalysts were prepared to apply for selective oxidation of refractory sulfur compounds in light cycle oils and hydrotreating of the oxidized S compounds, respectively. Physical properties of the catalyst samples were analyzed by BET, CO uptake chemisorption, and TEM. Structural properties for the supported Ni2P catalysts were analyzed by X-ray diffraction (XRD) and extended X-ray absorption fine structure (XAFS) spectroscopy. The selective oxidation of S compounds in the LCO feed was conducted in a batch reactor at H2O2/S ratio of 10, atmospheric pressure and 353 K and then the products were fed to a continuous flow fixed-bed reactor for hydrotreating at 623 K, 3.0 MPa, and LHSV’s of 0.5–2.0 h−1. A-PTA catalyst showed a high oxidation conversion of 95% for a real LCO feed. The following hydrotreating led to a hydrodesulfurization (HDS) conversion of 99.6% and a hydrodenitrogenation (HDN) conversion of 94.7% over Ni2P/SBA-15, which were much higher than those of direct hydrotreating results which gave an HDS conversion of 63.5% and an HDN conversion of 17.5% based on the same LHSV of 2.0 h−1. It was revealed that the reduction in refractory nitrogen compounds after oxidative treatment contributed to the increase of the following HDS activity. View Full-Text
Keywords: light cycle oil; selective oxidation; hydrodesulfurization; A-PTA; Ni2P light cycle oil; selective oxidation; hydrodesulfurization; A-PTA; Ni2P
►▼ Show Figures 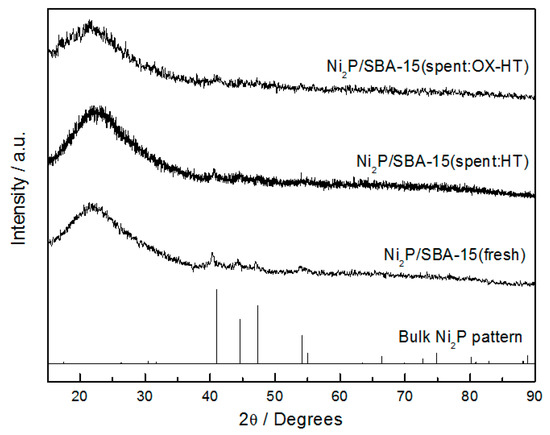