Improving Fe/Al2O3 Catalysts for the Reverse Water-Gas Shift Reaction: On the Effect of Cs as Activity/Selectivity Promoter
Next Article in Special Issue

Photoreduction of Carbon Dioxide to Methanol over Copper Based Zeolitic Imidazolate Framework-8: A New Generation Photocatalyst

Here we report a nitrogen-doped graphene modified metal-organic framework (N-G/MOF) catalyst, a promising metal-free electrocatalyst exhibiting the potential to replace the noble metal catalyst from the electrochemical systems; such as fuel cells and metal-air batteries. The catalyst was synthesized with a planetary ball milling method, in which the precursors nitrogen-functionalized graphene (N-G) and ZIF-8 are ground at an optimized grinding speed and time. The N-G/MOF catalyst not only inherited large surface area from the ZIF-8 structure, but also had chemical interactions, resulting in an improved Oxygen Reduction Reaction (ORR) electrocatalyst. Thermogravimetric Analysis (TGA) curves revealed that the N-G/MOF catalyst still had some unreacted ZIF-8 particles, and the high catalytic activity of N-G particles decreased the decomposition temperature of ZIF-8 in the N-G/MOF catalyst. Also, we present the durability study of the N-G/MOF catalyst under a saturated nitrogen and oxygen environment in alkaline medium. Remarkably, the catalyst showed no change in the performance after 2000 cycles in the N2 environment, exhibiting strong resistance to the corrosion. In the O2 saturated electrolyte, the performance loss at lower overpotentials was as low compared to higher overpotentials. It is expected that the catalyst degradation mechanism during the potential cycling is due to the oxidative attack of the ORR intermediates. View Full-Text
Keywords: oxygen reduction reaction; metal-organic framework; nitrogen-doped graphene; rotating disk electrode; durability study; potential cycling oxygen reduction reaction; metal-organic framework; nitrogen-doped graphene; rotating disk electrode; durability study; potential cycling
►▼ Show Figures 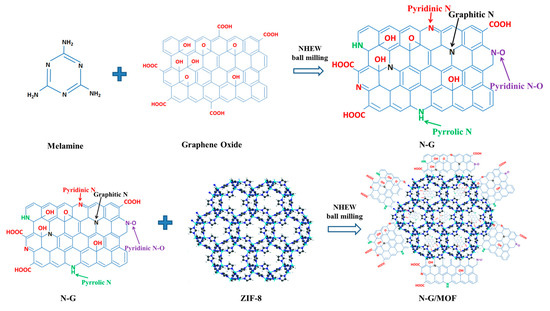