In recent years, as a result of the global energy crisis and environmental pollution, the search for cheap, efficient, and environmentally friendly alternative energy conversion and storage systems has aroused huge and sustained interest [1,2]. Hydrogen is a clean energy source, and fuel cells are the best way to utilize it. Fuel cells are considered one of the most efficient clean power-generating technologies of the 21st century. However, the high cost of fuel cells limits their commercialization; the precious metal catalysts make up a large part of the cost. To realize commercialization of the fuel cells as soon as possible, we urgently need to develop high-efficiency and low-cost non-precious metal catalysts to replace the high-cost, platinum-based noble metal catalysts [3,4,5,6,7].
Oxygen reduction reaction (ORR) plays a pivotal role in fuel cells and metal–air batteries [8,9,10]. Among the various non-noble metal ORR catalysts, transition metal–nitrogen–carbon (M/N/C) complexes or composites have attracted much attention due to their low price, high activity, long durability, and high resistance to methanol exchange [11,12]. Over the past several decades, non-noble metal catalysts (mainly Fe or Co) have been the most studied and have made great progress [13,14,15,16,17]. Jasinski first reported that nitrogen-containing metal macrocyclic compounds were able to catalyze oxygen reduction reaction, and thus created a new era of non-precious metals and non-metallic catalysts [10]. Subsequent studies have found that the activity and stability of the catalyst can be improved by pyrolyzing the metal salt compound and the nitrogen macrocyclic compound, which contain transition metal, nitrogen source, and carbon source [17,18,19]. Furthermore, the heteroatom-doped carbon material is a kind of promising material that can be used to replace the noble metal catalyst, and the doping of the carbon material with heteroatoms can effectively improve electrocatalytic activity and stability [20,21,22]. Among the heteroatom-doped carbon materials, nitrogen-doped carbon nanomaterials have been extensively studied because of their low cost, high electrocatalytic activity, high durability, and good environmental protection [23,24,25]. Many results have shown that the introduction of nitrogen atoms can induce the ionization of adjacent carbon atoms, promote the adsorption of oxygen, and lead to the improvement of catalytic activity. Nitrogen-doped carbon materials can also work with metal compounds to significantly improve catalytic efficiency [21,26].
Metal–organic framework (MOF) materials are composed of inorganic metal centers (metal ions or metal clusters) and bridged organic ligands through self-assembly interconnection, forming a porous crystalline material with a cyclical network structure [27,28,29,30]. MOF materials have a great prospect in non-precious metal catalysts because MOF materials have many advantages, such as structural diversity, adjustable aperture, and large specific surface area. These advantages have attracted the attention of researchers, and make MOF materials widely used in the catalytic field [29,31,32,33]. Since MOF-derived catalysts have many fully exposed nanostructures, resulting in their excellent electron transport properties, these catalysts have high electrocatalytic activity in fuel cells, in both acidic and alkaline electrolytes [29,34]. We can modify a MOF material to make it rich in Fe–N4 or Co–N4 coordination structure, so that the MOF material contains transition metal, nitrogen source, and carbon source. Specifically, we can introduce nitrogen atoms to form nitrogen-containing organic ligands, and then coordinate the modified ligands with the transition metal ions, to form a new kind of MOF material that contains nitrogen [30,33,34].

Herein, we reported a novel MOF material (denoted as Co-bpdc) and the preparation of Co-bpdc/MWCNTs composites. The Co-bpdc and Co-bpdc/MWCNTs composites were heated at a high temperature in a N2 atmosphere to form the catalysts. After calcination, the structure of the Co-bpdc/MWCNTs composites was destroyed, and the organic ligands from the Co-bpdc were carbonized to the graphite carbon layer. The central cobalt ions from the Co-bpdc were converted into Co nanoparticles, which were then distributed in the graphite carbon layers and MWCNTs. The MWCNTs worked as carriers and helped to disperse the cobalt atoms, and the addition of MWCNTs also improved the conductivity and electrocatalytic activity of the catalysts. For all the above reasons, the prepared catalysts have a higher ORR catalytic activity than the commercial Pt/C catalyst in alkaline media.
Formatting of Mathematical Components. The electron transfer number (n) during the oxygen reduction reaction was calculated from the Koutecky–Levich equation:
Here, J is the current density, JL and JK are the diffusion- and kinetic-limiting current densities, respectively, is the angular velocity, F is the Faraday constant (96,485 C mol−1), C0 is the O2 bulk concentration (C0 = 1.26 × 10−6 mol cm−3), D0 is the diffusion coefficient of the O2 in 0.1 M KOH or HClO4 (D0 = 1.9 × 10−5 cm s−1), is the kinematic viscosity of the electrolyte ( = 0.1 m2 s−1 in 0.1 M KOH or HClO4) [35].
Rotating ring-disk electron (RRDE) measurement can verify the ORR catalytic pathways of catalysts. We performed the measurement using a glassy carbon disk with a Pt ring at 0.73 V at a rotating speed of 1600 rpm. The electron transfer number (n) and the peroxide yield (HO2−) during the ORR process can be calculated according the following equation:
Here, Id and Ir are the disk current and ring current, respectively, and N is the current collection efficiency of the Pt ring (0.37) [35].

The electrochemical measurements were obtained at room temperature on an IM6ex electrochemical workstation manufactured by ZAHNER ENNIUM (Kronach, Germany) with a standard three-electrode system. The glassy carbon rotating disk electrode (5 mm in diameter) was used as the working electrode. A platinum electrode and an Hg/HgSO4 electrode with saturated KCl solution were used as the counter and reference electrodes, respectively. All the potentials measured were converted to reversible hydrogen electrode (RHE) scale. Cyclic voltammetry (CV) and linear sweeping voltammetry (LSV) were performed with a rotating disk electrode (RDE) and a rotating ring disk electrode (RRDE) on samples in 0.1 M KOH solution saturated with N2 or O2 (versus RHE). The preparation process of catalyst ink is as follows: 4 mg of the catalysts and 10 μL of 0.5 wt % Nafion solution were dispersed in 1 mL of isopropanol solution (V isopropanol:V H2O = 2:3) ultrasonically. We took 20 μL of the catalyst ink (containing 80 μg of catalysts) and dropped it on the surface of the glassy carbon electrode, and then the catalyst ink was naturally dried at room temperature before the measurement.

We have synthesized a novel MOF material (named as Co-bpdc) and applied it to a series of non-precious metal catalysts for fuel cells. The prepared catalysts show higher ORR catalytic activity than the commercial Pt/C catalyst in alkaline solution, and Co-bpdc/MWCNTs-100 shows the highest ORR catalytic activity of the series, with its initial reduction potential and half-wave potential reaching 0.99 V and 0.92 V, respectively, in 0.1 M KOH solution. Moreover, the catalysts favor the 4-electron ORR process in alkaline solution, and exhibit higher stability in alkaline solution than the commercial Pt/C catalyst. The addition of MWCNTs can enhance the electrocatalytic activity. In addition, this work provides a novel idea for the synthesis of MOF materials as precursors to prepare ORR electrocatalysts. Our results indicate that MOF materials have great potential in non-precious catalysts for full cell applications.

Ke Li performed a literature review, categorized the electrocatalysts in the introduction, did the research work and the main part of data analysis, and wrote the main part of the current work. Minglin Chen and Hehuan Cao corrected the English, helped with the part of data analysis and wrote part of this work. Fanghui Wang and Hong Zhu wrote part of this work, corrected the English grammar and syntax and supervised the whole work. 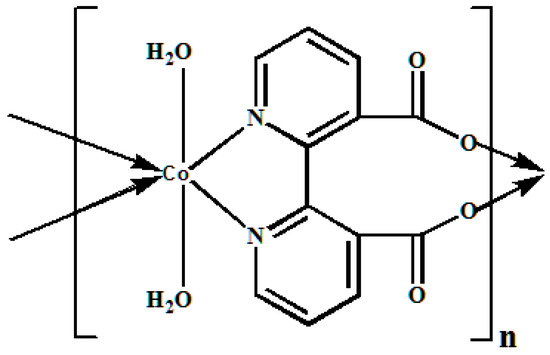 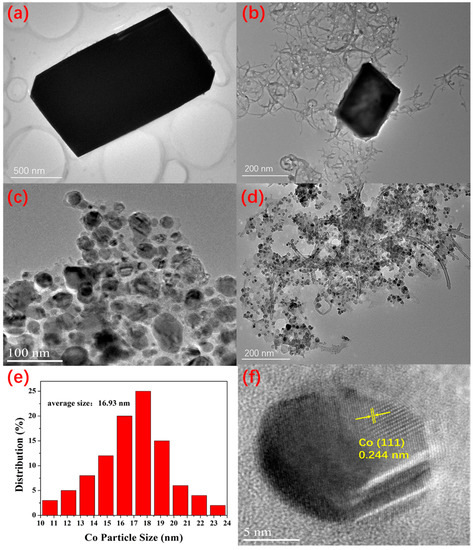 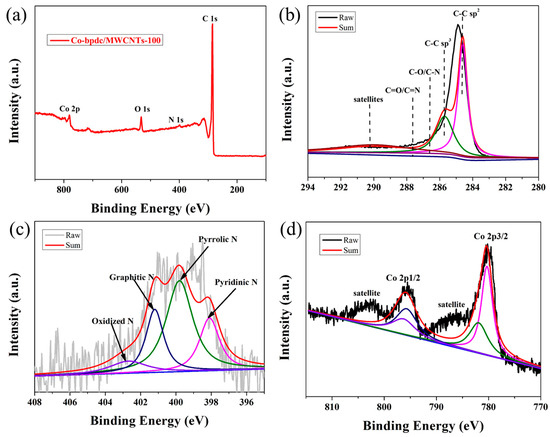 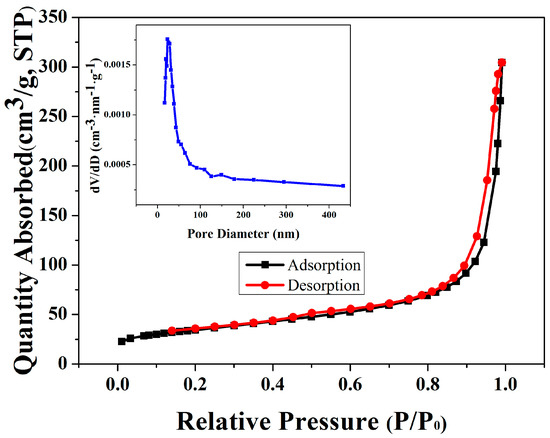