PEG1000-Based Dicationic Acidic Ionic Liquid/Solvent-Free Conditions: An Efficient Catalytic System for the Synthesis of Bis(Indolyl)methanes
Next Article in Special Issue

Terpenoids, which are composed of isoprenoid subunits, are the largest group of phytochemicals in the world, and are widely distributed in almost all living organisms [1]. Based on the number of isoprenoid units, terpenoids are subdivided into monoterpenoids (C10), sesquiterpenoids (C15), diterpenoids (C20), sesterterpenoids (C25), triterpenoids (C30), and tetraterpenoids (C40). Triterpenoids from several sources are used for medicinal purposes in Asia as anti-inflammatory, analgesic, antipyretic, hepatoprotective, and cardiotonic agents.
Antrodia cinnamomea, also called A. camphorate, is a parasitic fungus that grows only on the inner heartwood wall of the aromatic tree Cinnamomum kanehirai Hay (Lauraceae). This mushroom is endemic in Taiwan, and is used as a folk remedy in the treatment of a variety of diseases [2]. The fruiting bodies of A. cinnamomea contain abundant ergostane and lanostane tetracyclic triterpenoids, which are generally considered the major bioactive constituents of A. cinnamomea (Antrodia cinnamomea). More than 40 triterpenoids have been isolated from A. cinnamomea, where antcin K is one of the major ergostane triterpenoids from the fruiting bodies of cutting wood-cultivated, as well as dish-cultivated, A. cinnamomea. Some bioactivities of antcin K have been reported, including anti-inflammatory, antidiabetic, and antihyperlipidemic activities, inducing apoptosis of hepatoma cells, and reducing carcinogenesis [3,4,5,6,7,8].
Biotransformation of xenobiotics using microorganisms is a very useful approach for expanding the chemical diversity of natural products [9]. Many biotransformations of triterpenoids, including boswellic acid [10,11], oleanolic acid [12,13], betulinic acid [12,14], maslinic acid [13,15], ursolic acid [16,17,18], and ginseng-containing triterpenoids, such as ginsenosides [19], protopanaxadiol [20,21], and dipterocarpol [22], have been discovered. The biocatalysts used in studies include the fungi Aspergillus, Cunninghamella, Absidia, Rhizomucor, and Syncephalastrum and the bacteria Bacillus and Nocardia. The biotransformation reactions include hydroxylation, dehydrogenation, lactone formation, methylation, and (de)glycosylation. Many novel triterpenoids with potent bioactivity have been identified from the biotransformation reactions; however, to our knowledge, biotransformation of triterpenoids from A. cinnamomea has not been realized yet, although many bioactivities of triterpenoids have been identified from A. cinnamomea. Based on the abundance of antcin K in dish-cultured A. cinnamomea, biotransformation of antcin K is a good starting point with an alternate high-throughput screening method. In the present study, thousands of soil bacteria were isolated, and the ability to catalyze antcin K was determined. One positive strain was selected and then identified by genetic analysis. The biotransformation metabolites were purified with preparative high-performance liquid chromatography (HPLC), and identified using spectra methods.

2.1. Screening and Identification of Soil Bacteria with Biotransformation Activity

2.2. Isolation and Identification of Biotransformation Metabolites

To isolate the two metabolites, the fermentation was scaled up with a 5 L fermenter. Two batches of 2.5 L fermentation were performed in the 5 L fermenter. Compound (1) and compound (2) were further isolated using the preparative HPLC method, and were identified using spectrophotometric methods. Compound (1) and compound (2) showed identical mass and nuclear magnetic resonance (NMR) spectrum data. They showed an [M + H]+ ion peak at m/z: 487.42 in the electrospray ionization mass (ESI-MS) spectrum corresponding to the molecular formula C29H42O6. Then 1H and 13C NMR, including distortionless enhancement by polarization transfer (DEPT), heteronuclear single quantum coherence (HSQC), heteronuclear multiple bond connectivity (HMBC), nuclear Overhauser effect spectroscopy (NOESY), and correlation spectroscopy (COSY), spectra were obtained, and the 1H- and 13C-NMR signal assignments were conducted accordingly (shown in Figures S3–S6). The key HMBC correlations of compounds (1) and (2) are shown in Figure S7, and the spectroscopic data is listed in Table S1. Based on these spectral data and with the comparison of 1H-NMR and 13C-NMR data in the literature [25], as well as the biotransformation results above, compound (1) and compound (2) were characterized as antcamphin E and antcamphin F, respectively. Figure 3 illustrates the biotransformation of antcin K by the soil-isolated Psychrobacillus sp. AK 1817 strain.

4.3. Screening and Identification of Soil Bacteria with Biotransformation Activity

A series of soil samples, collected from local areas of Tainan city in Taiwan, were used for isolation of the bacterial strains. The fresh soil samples were plated according to the dilution plating method on Luria-Bertani (LB) agar [32]. After cultivation at 28 °C for 24 h, the colonies that formed on the plates were transferred to a deep 48-well microplate containing 1 mL of LB medium. The microplate was incubated at 180 rpm and 28 °C for 1 day. About 0.1 mL of the primary culture was then transferred to another microplate containing 1 mL of LB medium and 100 mg/L of antcin K for the secondary cultivation. The remaining primary culture was stored at −20 °C until the biotransformation activity assay was completed. The secondary cultivation was carried out at 180 rpm and 30 °C for 3 days. Then, an equal volume of ethanol was added to each well of the secondary cultivation microplate and shaken vigorously for 30 min at 28 °C. The cell debris was removed by centrifugation at 4800 rpm for 30 min. The supernatant from the extracted broth was assayed with UPLC to measure the biotransformation activity. To confirm the activity of the biotransformation-positive strains, the tested strains were cultivated in a 250-mL baffled Erlenmeyer flask containing 20 mL LB medium and 100 mg/L antcin K at 180 rpm and 28 °C for 5 days. Samples were collected daily and analyzed with UPLC to confirm the biotransformation activity. Candidate strains were re-purified and then reanalyzed by repeating the biotransformation activity assay.

The mixtures of the biotransformation reactions were analyzed with a UPLC system (Acquity UPLC H-Class, Waters, Milford, MA, USA). The system was equipped with an analytic C18 reversed-phase column (Acquity UPLC BEH C18, 1.7 μm, 2.1 i.d. × 100 mm, Waters, Milford, MA, USA). To analyze both antcin K and the biotransformation products, a gradient elution using water (A) containing 1% (v/v) acetic acid and methanol (B) with a linear gradient for 3 min with 50% to 80% B and for another 4 min with 80% to 100% B was conducted at a flow rate of 0.3 mL/min, an injection volume of 0.2 μL, and absorbance detection at 254 nm.

For determination of the 16S ribosomal RNA gene sequences of the biotransformation–positive strain, chromosomal DNA was isolated using a Geno Plus Genomic DNA Extraction Miniprep System (Viogene, Taipei, Taiwan) according to the manufacturer’s instructions. The 16S rRNA gene was amplified using PCR with the forward (5′-AGAGTTTGATCCTGGCTCAG-3′) and reverse (5′- GACGGGCRGTGWGTRCA-3′) primers known to amplify the 16S rRNA gene from a broad range of taxonomically different bacterial isolates [33]. PCR was performed with a total volume of 100 µL, which contained PCR buffer, 1 µg genomic DNA, 0.2 mM (each) deoxyribonucleotide triphosphate, 50 pmol (each) forward and reverse primers, and 2.5 U of Taq DNA polymerase. Amplification was performed for 35 cycles in a DNA thermal cycler, the ABI Prism 377 DNA Sequencer/Genetic Analyzer (Perkin-Elmer, Boston, MA, USA), employing the thermal profile according to Hugenholtz and Goebel [33]. The sequence of the amplified DNA fragment was determined by the DNA Sequencing Center of National Cheng Kung University in Tainan (Taiwan). The 16S rRNA was then blasted against NCBI non-redundant nucleotides to identify the strain. The 16S rRNA phylogeny was constructed to classify the strain. Related sequences were downloaded and aligned using the ClustalX program [34], followed by manual modifications. The maximum-likelihood (ML) tree was reconstructed using GTR+G+I distances as implemented in the Molecular Evolutionary Genetics Analysis (MEGA) version 7.0 package [24] with 100 bootstrap replications [35]. The substitution model (parameter) used to calculate the GTR+G+I distances was selected using Modeltest 3.7 [36].

4.6. Scale-Up Fermentation, Isolation, and Identification of the Biotransformation Products

The AK 1817 strain was cultured in 100 mL of LB medium for 24 h as a seed culture, which was inoculated into a 5 L fermenter containing 2.5 L LB medium supplemented with 100 mg/L antcin K, followed by cultivation with aeration (0.5, v/v/m) and agitation (280 rpm) at 28 °C. A 10 mL cultured medium was sampled at several different time intervals and analyzed with UPLC. The purification process was the same as in our previous work [37], and is described briefly below. Two batches of 2.5 L fermentation were performed for the purification of the biotransformation products. Following fermentation, the broth was condensed to 200 mL under a vacuum, and extracted twice by ethyl acetate. The extracts were further condensed and the residue was then suspended in 200 mL of 50% methanol. The suspension was filtrated through a 0.2 μm nylon membrane. The filtrate was injected into a preparative YoungLin HPLC system (YL9100, YL Instrument, Gyeonggi-do, South Korea). The system was equipped with a preparative C18 reversed-phase column (Inertsil, 10 μm, 20.0 i.d. × 250 mm, ODS 3, GL Sciences, Eindhoven, The Netherlands). The operational conditions for the preparative HPLC analysis were the same as those in the UPLC analysis. The elution corresponding to the peaks of the metabolites in the UPLC analysis were collected, concentrated under vacuum, and then lyophilized. Finally, 27.9 mg of compound (1) and 33.3 mg of compound (2) were obtained, and the structures of the compounds were confirmed with NMR and mass spectral analysis. The mass analysis was performed on a Finnigan LCQ Duo mass spectrometer (ThermoQuest Corp., San Jose, CA, USA) with electrospray ionization (ESI). 1H- and 13C-NMR, DEPT, HSQC, HMBC, COSY, and NOESY spectra were recorded on a Bruker AV-700 NMR spectrometer (Bruker Corp., Billerica, MA, USA) at ambient temperature. Standard pulse sequences and parameters were used for the NMR experiments, and all chemical shifts were reported in parts per million (ppm, δ).

This research was financially supported by grants from the National Scientific Council of Taiwan (Project No. MOST 105-2221-E-024-018-).

Te-Sheng Chang and Jiumn-Yih Wu conceived and designed the experiments and wrote the paper; Chien-Min Chiang purified the metabolites and resolved the chemical structures of compounds (1) and (2). Tzi-Yuan Wang identified the isolated bacteria. An-Ni Ke performed the experiments for the biotransformation and anti-proliferative activity assay of the tested compounds. 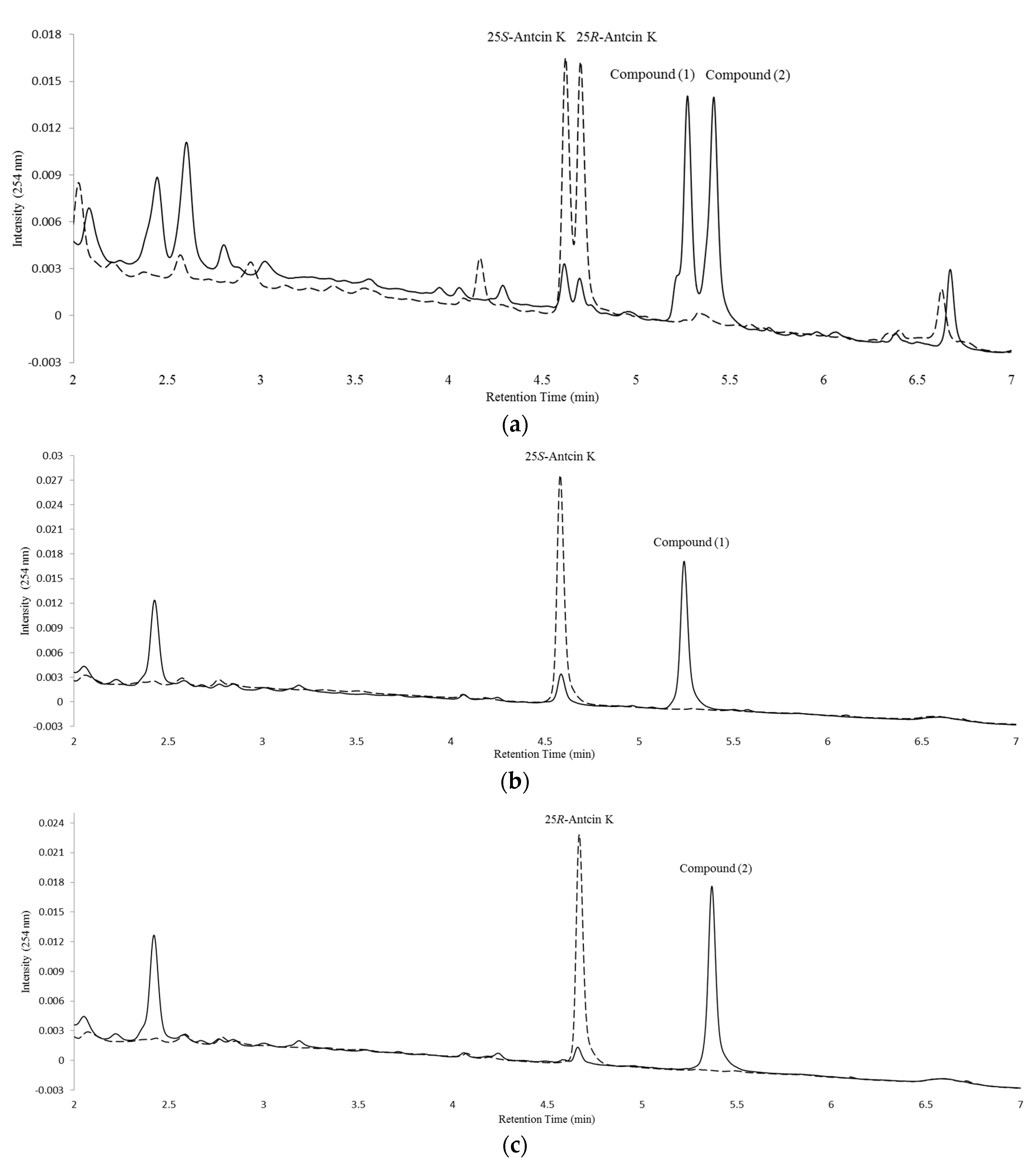