Effect of Surface Copper Species on NO + CO Reaction over xCuO-Ce0.9Zr0.1O2 Catalysts: In Situ DRIFTS Studies

Catalysts supported on nanomaterials have been widely investigated for the treatment of hazardous materials. This work has developed a novel method for grafting hematin on nanomaterials for catalyzing the oxidation of aniline in order to remove aniline from wastewater. Magnetic multi-walled carbon nanotubes (M-MWCNTs) were coated with a layer formed through the hydrolysis and condensation of 3-mercaptopropyltriethoxysilane (MPTS). Hematin was specifically grafted on the MPTS-coated M-MWCNTs through thiol-alkene reaction. Hematin-MPTS-M-MWCNTs were used to catalyze the oxidation of aniline, and a high efficiency has been obtained. Consecutive use of the conjugate of hematin-MPTS-M-MWCNTs has been investigated, and the activity has been retained to a significant extent after five reaction/cleaning cycles. The result demonstrates that hematin-MPTS-M-MWCNTs are efficient for catalyzing the oxidation of aniline. The methodology for the specific grafting of hematin is of general utility, it is an easy-to-operate method and can be extended to other supports. Potentially, hematin-MPTS-based conjugates have a widespread application in catalyzing the removal of aniline from wastewater.
Keywords: hematin; aniline; polyaniline; wastewater; carbon nanotubes hematin; aniline; polyaniline; wastewater; carbon nanotubes

In coal-conversion processes, aniline is a by-product and is soluble in process water [1]. Aniline has caused great concerns as it is very toxic to human beings and organisms [2,3,4,5]. Removing aniline from the wastewater has been paid great attention, and enormous research work on this topic has been carried out. Waste rubber tire [1], PAM/SiO2 [6], activated carbons [7,8], modified sawdust [9,10] and PMAA/SiO2 [11] have been studied as adsorbents for adsorption of aniline from wastewater. Chemical and biochemical processes, such as moving bed biofilm reactor [4], heterogeneous catalytic wet air oxidation of aniline [5], aniline degradation by photocatalysis and ozonation [12,13], and degradation of aniline with bacteria [13,14] have been investigated for converting aniline. Enzymatic catalysis for the conversion of aniline is also attractive. Hemoglobin was encapsulated in a silica-based matrix for catalyzing the removal of aniline from aqueous solution [15]. Horseradish peroxidase has been intensively studied for the enzymatic catalysis of the oxidative polymerization of aniline [16,17,18]. Polymerization of aniline catalyzed by enzymes can be carried out under milder conditions, and the formed polyaniline can be removed from the wastewater through precipitation. However, when pH conditions are more acidic or more alkaline, not around the optimal pH conditions that are most suitable for the enzymatic catalysis, the enzymatic activity may significantly decrease.
Hematin is a hydroxyl ferri protoporphyrin. It is an inexpensive alternative to horseradish peroxidase and has been used for the catalysis of polymerization of aniline [16]. Hematin is more stable in a wider range of pH conditions and more tolerant of H2O2 than horseradish peroxidase [17,18]. Thus, polymerization of aniline can be catalyzed by hematin under various conditions [19]. However, hematin has a low solubility in aqueous solutions and tends to aggregate at acidic conditions [16]. This is the obstacle for application of hematin [16]. Grafting hematin on supports can be a solution to the problem [20]. Catalysts supported on nanomaterials have been investigated for the treatment of hazardous materials. Magnetite-supported hematin has been used in the aniline elimination and in the removal of phenol [20]. Polymerization of aniline was catalyzed by the halloysite nanotubes-supported hematin [21]. In this work, 3-mercaptopropyltrimethoxysilane (MPTS) was used to coat carbon nanotubes (CNTs), hematin was specifically grafted on the MPTS-coated CNTs. The grafted hematin has demonstrated a high catalytic efficiency in the conversion of aniline. Potentially, hematin grafted on MPTS-coated supports can have a widespread application in catalyzing the removal of aniline from wastewater.

2.2. Oxidation of Aniline Catalyzed by Hematin-MPTS-M-MWCNTs

MWCNTs were purified by refluxing in HNO3 (2.6 M) at 70 °C [29]. After 30 h, the nanotube suspension was rinsed with distilled water by filtering through a 0.2 μm polycarbonate membrane. The samples were dried at 60 °C under vacuum.
Magnetic MWCNTs (M-MWCNTs) were prepared according to the methods reported by Tan et al. [30]. 130 mg Iron(II) acetate was grinded and then mixed with 300 mg purified MWCNTs. The sample was then put into a quartz tube which had been purged by introducing nitrogen for 20 min. The sample was thermally treated under nitrogen at 300 °C for 3 h.
A quantity of 200 mg M-MWCNTs were dispersed in 40 mL ethanol and sonicated for 10 min. 200 mg MPTS and 6 mL ammonia solution were then added to the suspension, sonication was carried out for 4 h at 50 °C. M-MWCNTs coated with MPTS (MPTS-M-MWCNTs) were rinsed sequentially with ethanol and water, each for 10 min, by filtering through a membrane (0.2 μm).
A quantity of 200 mg MPTS-M-MWCNTs were dispersed in 100 mL DMSO. Homogeneous dispersion was achieved through sonication for 20 min. Then 40 mg AIBN and 40 mg hematin were added. Incubation was carried out for 12 h at 60 °C under shaking (200 rpm). The suspension was then filtered through a 0.2 μm membrane, rinsed sequentially with DMSO and water, each for 10 min. Hematin-MPTS-M-MWCNTs were dried with nitrogen-blowing.
The amount of SH groups on MPTS-M-MWCNTs was determined using the Ellman method [25]. 5,5′-Dithiobis(2-nitrobenzoic Acid) (DTNB) was used as the Ellman agent. DTNB reacted with 3-mercaptopropionic acid, and the adsorption at 412 nm was measured. For SH groups, the calibration curve was obtained as illustrated in Figure S2.
A quantity of 200 mg MPTS-M-MWCNTs were dispersed in 60 mL water by sonication for 10 min. Then 2 mL DTNB solution (4.0 mg/mL) was added. The reaction was carried out for 5 min, then MPTS-M-MWCNTs were removed by filtering the suspension. For the filtrate, the adsorption at 412 nm was measured. The calibration curve for hematin is shown in Figure S3. By subtracting the amount of hematin in the original solutions with that in the filtrate, the amount of hematin that was grafted on MPTS-M-MWCNTs was determined. It was 0.11 mg hematin/mg MPTS-M-MWCNTs.

A quantity of 100 mg of functionalized carbon nanotubes (hematin-MPTS-M-MWCNTs) were added to 10 mL aniline solution (0.055 M), the mixture was sonicated for 30 min, then 1 mL hydrogen peroxide (30%, v/v) was added dropwise. The mixture was then incubated under shaking (160 rpm) at 25 °C. After 2 h, 1 mL HCl (37%) was added. Samples were taken at regular time intervals to monitor the progress of aniline oxidation.
The concentrations of initial and remaining aniline after reaction were analyzed through HPLC (Shimadzu LC-10A) using C18 column (Dikma Technoloqies, Beijing, China). The solution of CH3OH/H2O (70/30 by vol) was used as the mobile phase with a flow rate 1 mL/min. The retention time and calibration curve for aniline are shown in Figure S4 and Figure S5, respectively.

Infrared spectra were measured using a FTIR spectrometer (Bruker TENSOR 27, Beijing, China), which is equipped with a temperature-controlled ATR with ZnSe Crystal (Pike Technology, New Jersey, NJ, USA) and a specular reflectance accessory. A liquid-nitrogen-cooled mercury-cadmium-telluride detector was used. It collected 128 scans per spectrum at a resolution of 2 cm−1. The ATR element spectrum was used as background. Ultrapure nitrogen gas was introduced for purging water vapor.
Ultraviolet-visible absorption spectroscopy measurements were performed in a Shimadzu UV2550-PC spectrophotometer (Beijing, China) using 1-cm-path length quartz cuvettes. Spectra were collected within a range of 190–800 nm.

Mediated by 3-mercaptopropyltriethoxysilane, hematin has been specifically grafted on magnetic carbon nanotubes. This is a novel and easy-to-operate method for grafting hematin on micro and nanomaterials. Hematin-MPTS-M-MWCNTs have been used to catalyze the oxidation of aniline, and high conversion of aniline has been achieved. Biodegradable polymer polyaspartic acid has been found to efficiently promote the conversion of aniline. Recovering the catalyst from the reaction media has been carried out in a simple way, and the activity has been retained to a significant extent after five reaction/cleaning cycles, demonstrating the potential of consecutive use of the catalyst.

The following are available online at www.mdpi.com/2073-4344/6/8/123/s1, Figure S1: (a) Hematin-MPTS-M-MWCNTs were well dispersed in the solution; (b) Hematin-MPTS-M-MWCNTs were separated from the solution with a magnet. The yellow colour was due to the initial reaction after the dropwise addition of H2O2. Figure S2: Standard curve for SH group. Figure S3: Standard curve for hematin. Figure S4: Retention time of aniline. Figure S5: Calibration curve for aniline.

This work was supported by the National Science Foundation of China (21476023). 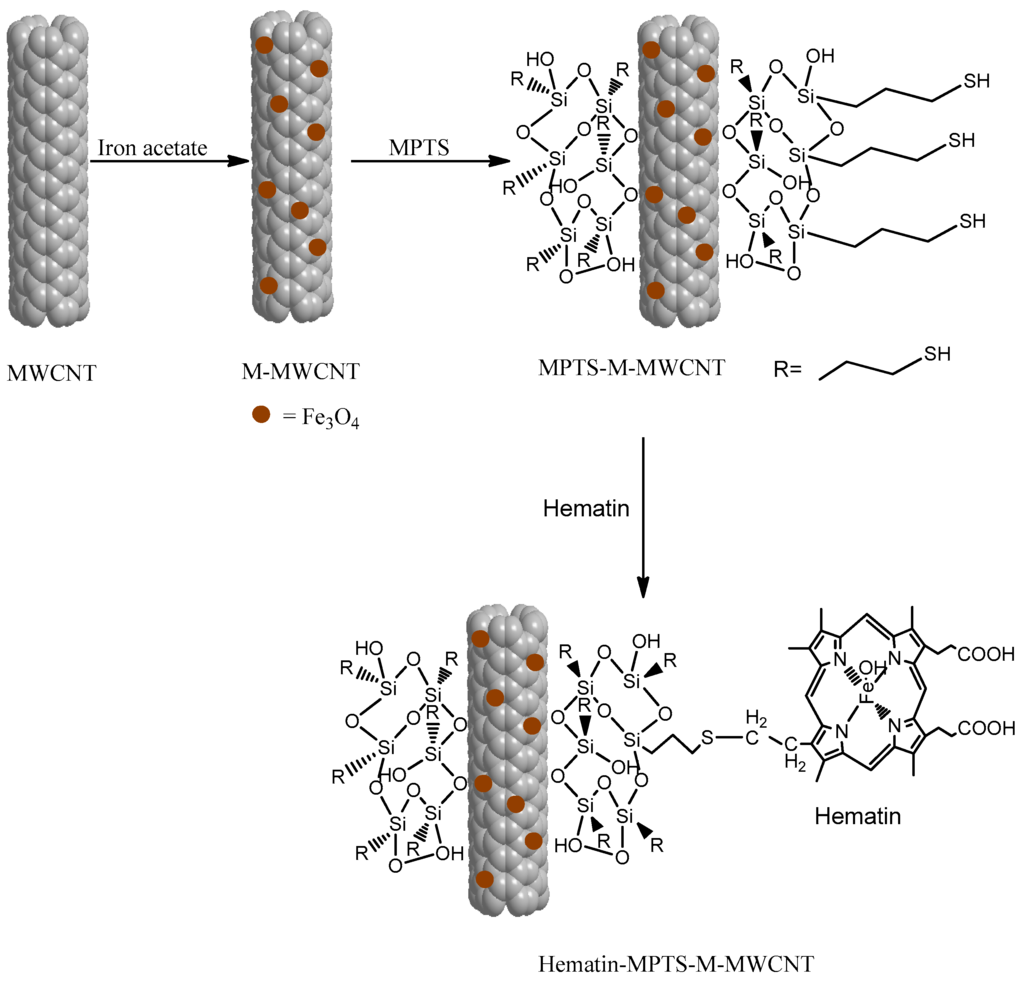 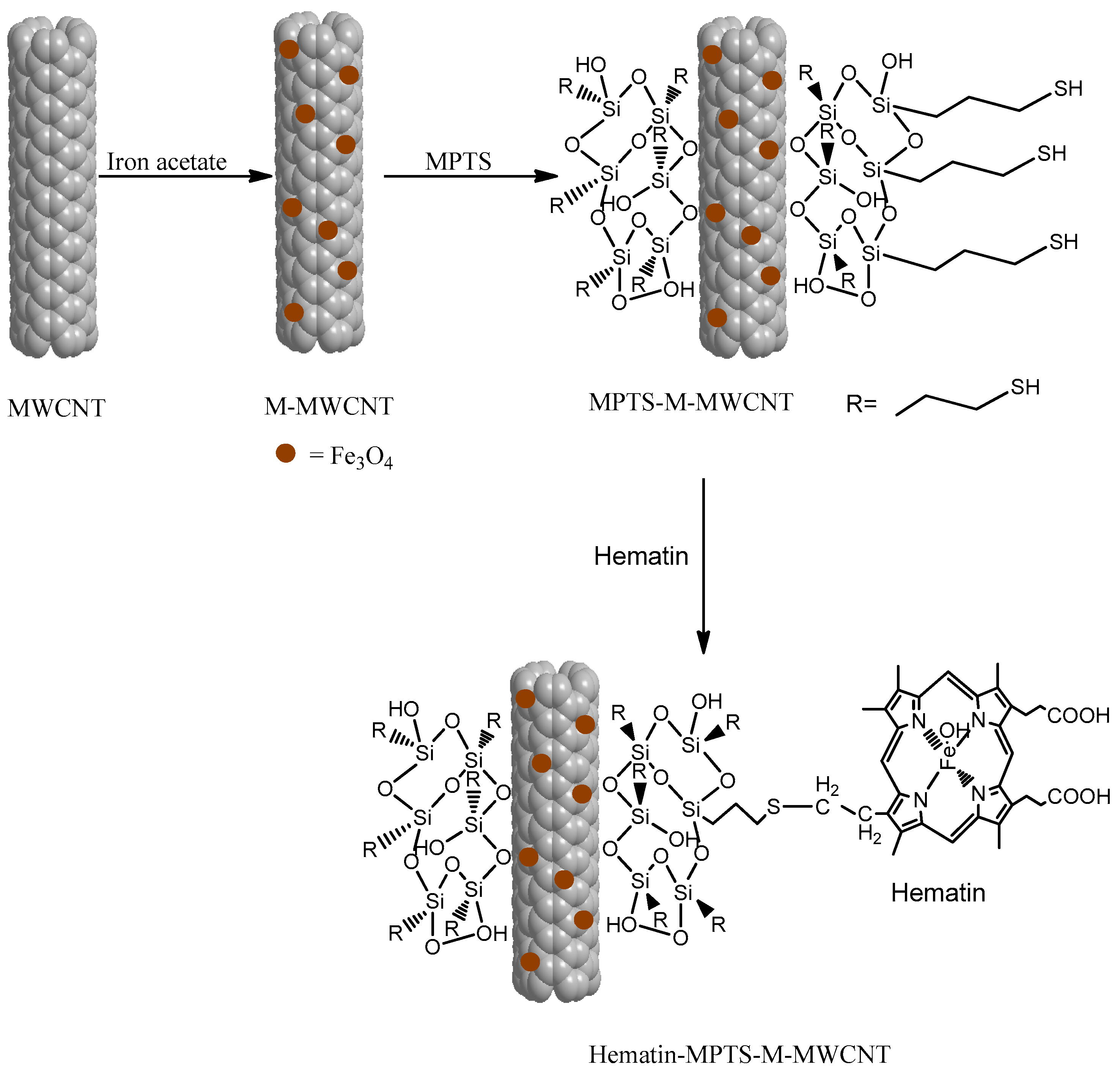 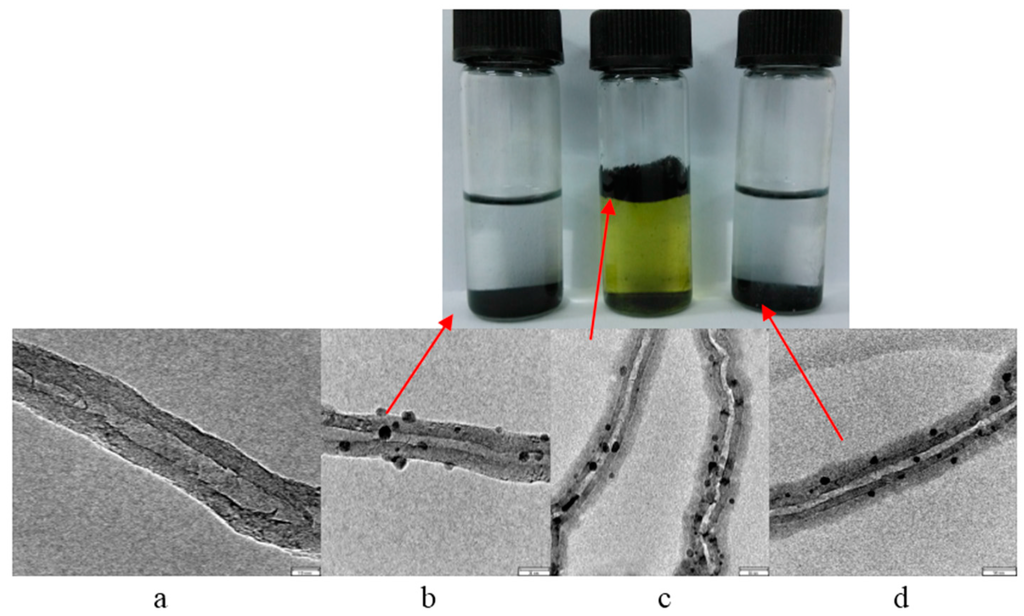 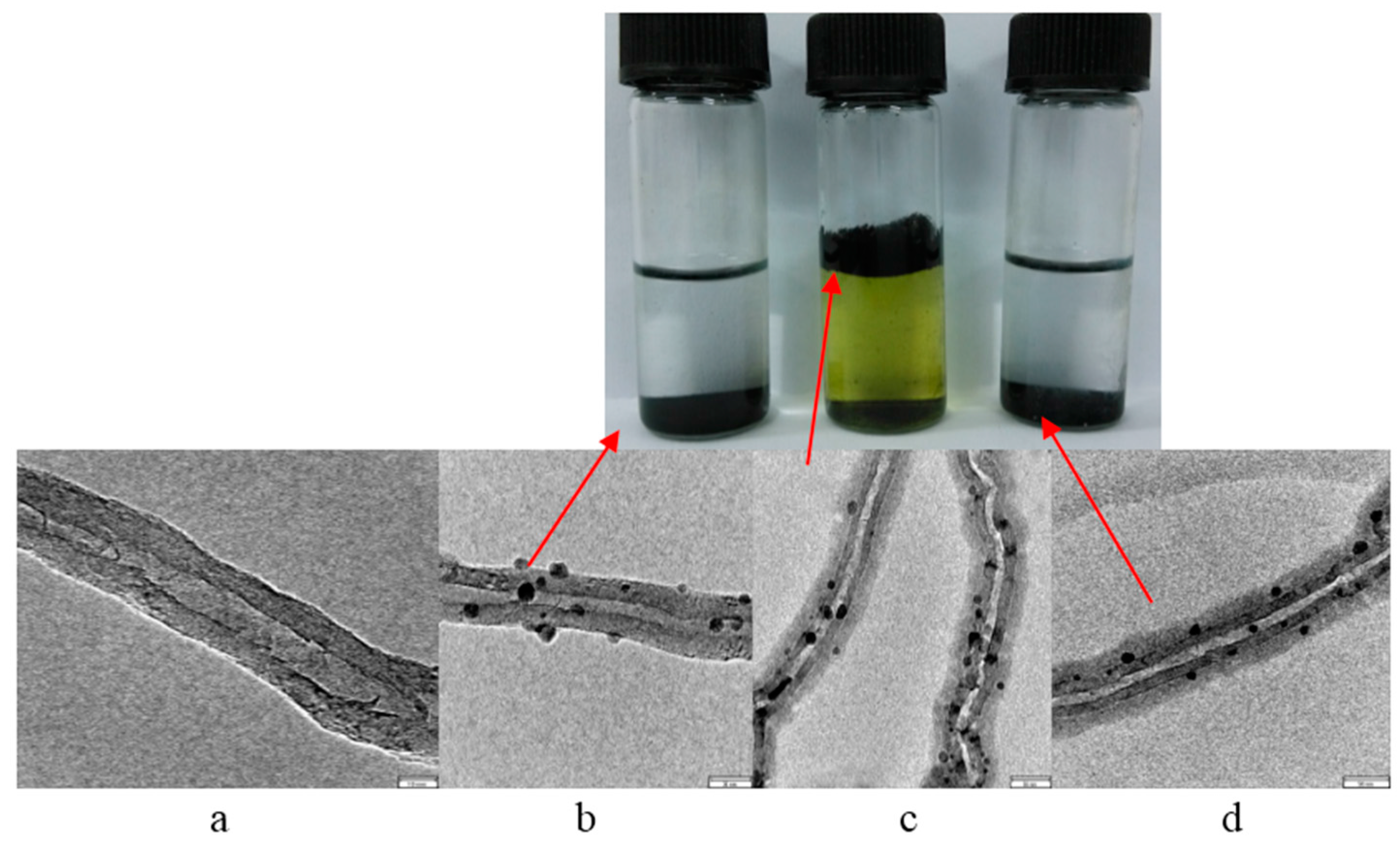 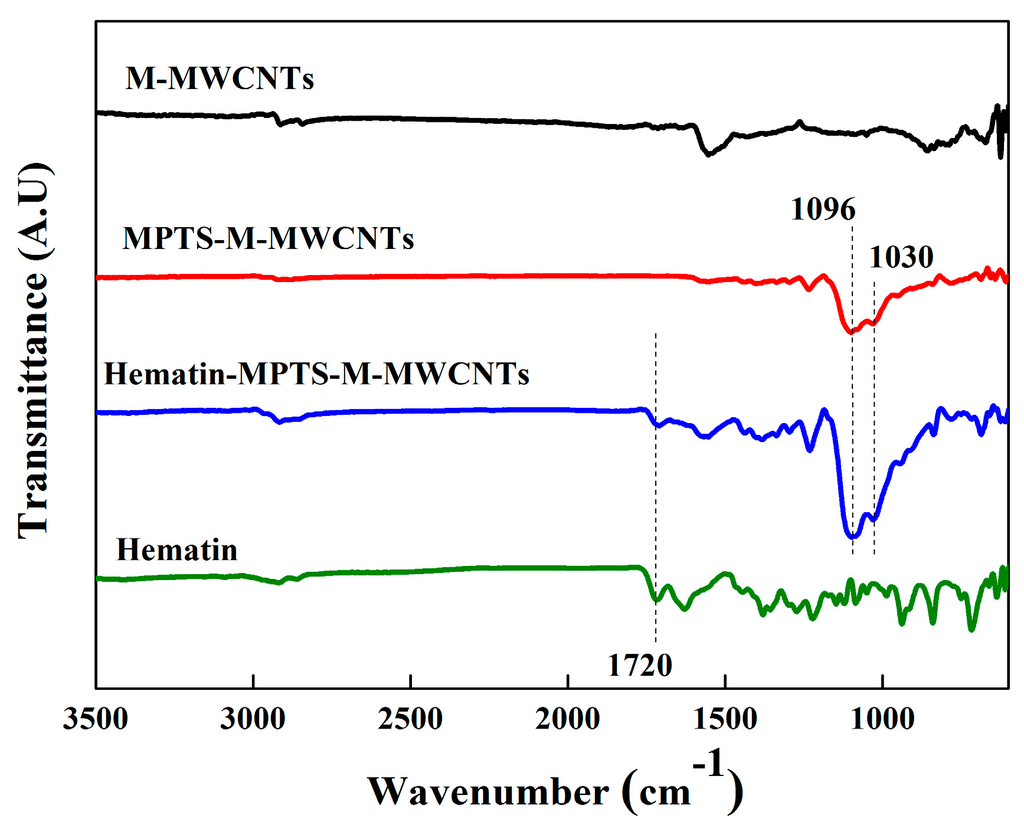 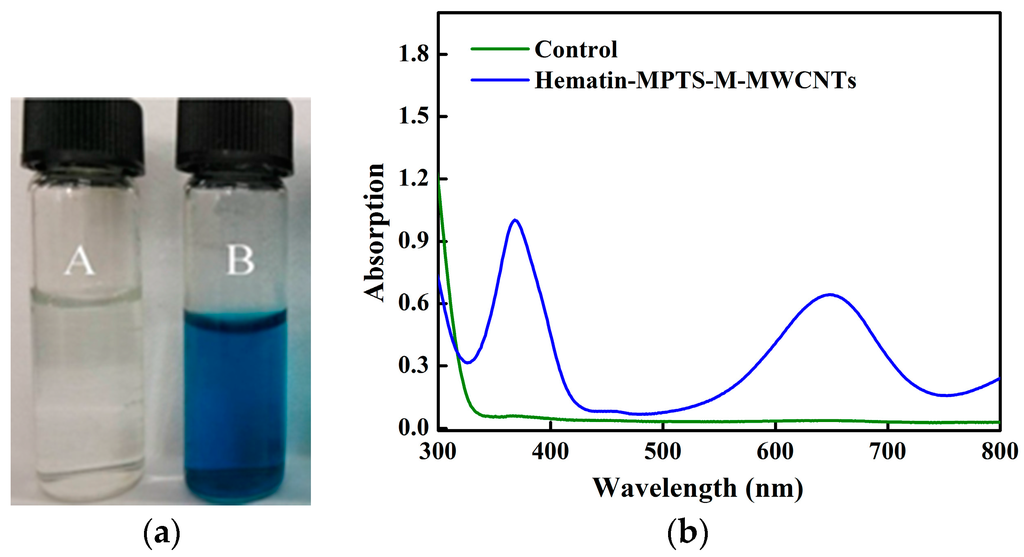 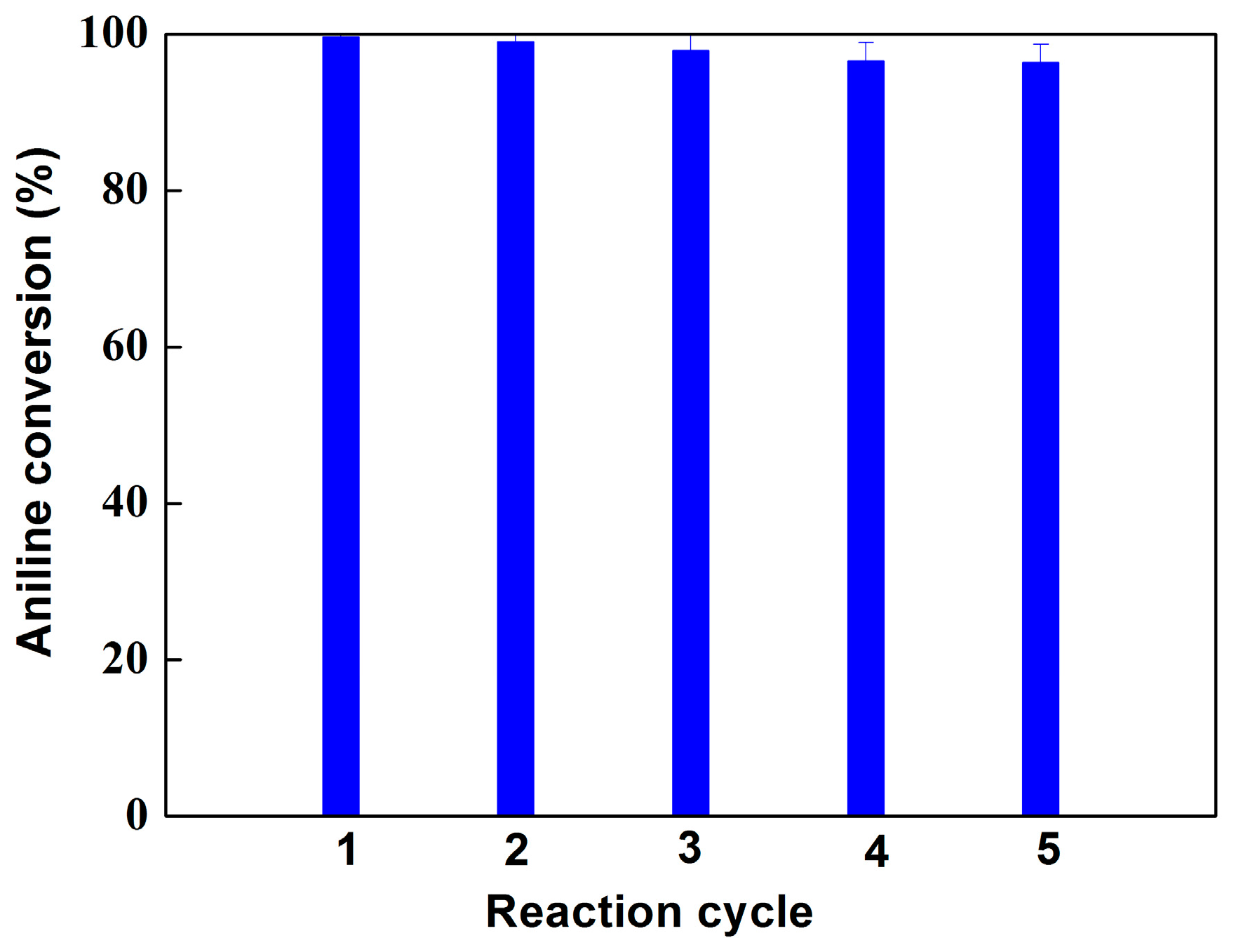