Proteins and enzymes are essential components of living cells. Among a variety of other functions, they act as hormones in cell signaling, protein transporters, antibodies in host defense, etc. Concomitantly, enzymes are some of the most efficient catalysts known to date, enhancing biochemical reaction rates up to 19 orders of magnitude relative to uncatalyzed reactions [1,2]. However, factors contributing to these large rate enhancements in enzyme-catalyzed reactions remain largely uncharacterized. The original structure-function paradigm, popular for many decades, portrayed enzymes as rigid structures with shapes that facilitate substrates, ligand and/or cofactor binding. This original model evolved over time, and theories were developed that led to the now-accepted induced fit, conformational selection, and transition-state stabilization models to explain the behavior of protein-ligand recognition and catalysis in the molecular function of enzymes [3]. Increasing evidence suggests that proteins sample a variety of distinct conformations (or sub-states) enabled by concerted atomic-scale dynamical fluctuations occurring over a wide range of timescales and acting on the primary, secondary, tertiary, and quaternary organization of their molecular structure [4]. Conformational transitions between highly and rarely populated states have been shown to play important roles in substrate recognition, binding, and product release, among others [5,6,7,8]. Advances in experimental and computational methodologies continue to offer new insights into enzyme conformational motions over functionally relevant timescales [9,10,11,12]. Interestingly, experimental [13,14], computational [15,16], and sequence-based [17,18] approaches have also revealed functional networks of concerted residue motions distant from the active site in selected enzyme systems. Correlations between the timescale of conformational fluctuations and that of catalytic turnover have been well established in a variety of enzyme systems, including cyclophilin A [14], RNase A [5,19,20], triosephosphate isomerase [21], and HIV-1 protease [22], among others. Further, the rate of conformational exchange has been shown to coincide with the rate-limiting step, such as product release, in some of these systems [19,20]. Conformational exchange between sub-states allows enzymes to sample higher energy conformations with structural and dynamical properties important for function such as ligand binding and allosteric regulation [11,16,23]. In addition to the millisecond conformational exchange, dynamics on faster timescales modulate the chemical environment through rearrangements in the active site, thus affecting enzyme function [24]. Taken together, a view is emerging whereby conformational fluctuations occurring over a range of timescales can affect enzyme function through conformational sampling along preferred pathways.
Over the past few years, a number of controversial statements relating ‘catalysis’ with ‘dynamics’ have been published in the literature, often giving rise to heated debates between experimentalists and theoreticians [25,26]. As recently outlined, these debates are often semantic in nature and can be traced back to actual definitions (and research field perceptions) of what ‘protein dynamics’ represents, in addition to which atomic-scale events are being observed and/or over which timescales they occur during enzyme-catalyzed reactions [25]. In the current report, we consider motions affecting enzyme function in a broad sense, i.e., “any motion that, if impeded, would reduce the ability of the enzyme to function by the mechanism that it has evolved to execute” [27]. As such, we take into account motions on a wide range of timescales, from the fast, local picosecond-nanosecond (ps-ns) fluctuations of individual residues to the slower microsecond-millisecond-second (μs-ms-s) global conformational exchange experienced by enzymes. Conserved motional events occurring on a broad range of timescales could be involved in many and/or a selected subset of events occurring along the catalytic cycle of an enzyme, including ligand binding, recognition, substrate discrimination, structural rearrangements leading to the transition state, product release, etc. [25]. To clarify and prevent confusion, we never imply that ‘motions contributing to catalysis’ exclusively describe the fast femtosecond atomic motions involved in transition-state chemistry.
In the current account, we draw attention to a number of experimental and computational methodologies that have recently improved our understanding of catalytic and functional properties in two enzyme systems that closely rely on conformational dynamics for proper biological function. We do not pretend to cover the overwhelming number of theoretical approaches, methodologies, or enzymatic systems that previously illustrated the role of protein dynamics in enzyme function, but instead focus on recent reports where the combination of experimental NMR and computational techniques have emphasized the role of conformational exchange in inhibitor binding (HIV-1 protease) and fidelity in DNA repair through the selection of correct nucleotides (DNA polymerase β).

DNA polymerase β (Pol β) is a 39 kDa monomeric enzyme involved in the base excision repair of damaged DNA. Pol β prefers short-gapped or single-base-gapped DNA substrates [103] and is responsible for the repair of around 20,000 DNA lesions per cell per day [104]. Mutations of some residues in Pol β have been shown to increase the error rate of the enzyme; further, overexpression of Pol β has been implicated in nearly 30% of human cancers [105,106]. Incorporation of correct nucleotides is an essential step in the catalytic mechanism of the enzyme. The structure of Pol β consists of two domains: an 8 kDa lyase domain involved in the removal of deoxyribose 5′-phosphate, and a 31 kDa polymerase domain which performs template-directed DNA synthesis [107]. The polymerase domain is further composed of nucleoside 5′-triphosphate selection, nucleotide transferase, and DNA-binding subdomains, corresponding to the fingers, palm, and thumb regions, respectively. The catalytic mechanism of Pol β, which requires two Mg2+ ions as cofactors, is shown in Figure 4.
Crystallographic studies have shown that Pol β undergoes large conformational changes upon substrate binding [110,111,112,113,114,115] and suggest an induced fit mechanism for the binding of correct nucleotides [111]. The apo form of the enzyme is characterized by an extended conformation of the lyase domain (Figure 5a), which adopts a compact open conformation upon DNA binding (Figure 5b). Binding of the nucleotide 5′-triphosphate (dNTP) promotes closing of the N-helix in the finger subdomain (Figure 5c). NMR studies were recently performed to characterize the millisecond timescale conformational exchange experienced by the apo and DNA-bound binary complex forms of Pol β [8]. The authors of that study showed that conformational exchange in the apo form occurs primarily in the lyase domain and the base of the thumb in the polymerase domain, and corresponds to residues that are either in direct contact or in close proximity to the substrate in the binary complex. In contrast, the number of residues displaying conformational exchange in the binary complex with DNA was significantly reduced. These residues are primarily located in the polymerase domain, suggesting that DNA binding limits the motions in the lyase domain (Figure 6). Chemical shift variations were located in the lyase domain, associated with large conformational changes experienced by Pol β upon DNA binding (Figure 5a,b). Comparison of the conformational exchange relaxation rates with chemical shift variations between the apo and binary forms indicates that the enzyme in the apo form samples conformations adopted by the DNA-bound binary form, thus contradicting the induced fit mechanism proposed by the aforementioned crystallography experiments, at least for the formation of the binary complex (step 1 in Figure 4). Interestingly, residues displaying conformational exchange in the apo and binary complex forms correspond to mutational sites known to affect Pol β activity and identified in colon cancer tumors [116]. Taken together, these results hint at the potential role of conformational motions in the catalytic function of Pol β.
Conformational changes in both Pol β and substrates have been suggested to play a critical role in the selection and incorporation of correct nucleotides [117]. Experimental [109,111,112,113,118] and computational [119,120] studies suggest an induced fit mechanism for the selection of correct nucleotides (step 2 in Figure 4), which form a Watson-Crick base pair with the DNA substrate. The mechanism involved in the selection of correct dNTP binding and discrimination is a hotly debated topic [109]. Crystal structures with open (Figure 5d), closed (Figure 5e), and intermediate conformations have been obtained with mismatched or incorrect dNTPs, such as dA that cannot form a correct base pair with dG of the DNA substrate. Previous fluorescence studies [118,121,122] showed movements in Pol β upon incorporation of dNTPs and cofactors, while more recent studies [108] indicate the rapid movement (ms timescale) of the fingers domain upon binding to correct dNTPs. Incorporation of incorrect dNTPs did not induce these conformational changes.
Moscato et al. characterized the effects of Pol β binding to correct and incorrect dNTPs on the millisecond timescale using NMR relaxation dispersion experiments [109]. Binding of correct dNTP to Pol β led to large chemical shift variations localized in the fingers subdomain, similar to previous observations [111,114]. No residue displayed conformational exchange, suggesting a stable conformation of the ternary complex on the millisecond timescale, similar to that observed for the binary complex. In contrast, chemical shift changes upon addition of the incorrect dNTP were much smaller than those observed for the correct dNTP. Comparison of the direction of chemical shift variations during titrations, performed using chemical shift perturbation [123], revealed that the conformation of the mismatching complex is not on-pathway to the closed conformation observed upon binding of the correct nucleotide. Further, binding of the mismatched dNTP led to enhanced millisecond dynamics of 10 residues with conformational exchange rates varying between 500 and 2700 s−1. These results support an induced fit mechanism for the ternary complex (step 2 in Figure 4), where binding of the correct nucleotide promotes a shift from the open binary complex form to a closed ternary complex conformation.

The intrinsic dynamical properties of enzymes have been shown to impact the catalytic function in a variety of well-characterized systems. Advances in experimental and computational approaches continue to offer insights into the important role of conformational fluctuations in function on timescales relevant for enzyme catalysis and other biological events. Conformational exchange on the catalytically relevant timescale facilitates sampling of excited-state conformations or sub-states, aiding in various steps along the reaction pathway, such as substrate recognition, binding, and product release. In this review, we depicted the important effects of conformational dynamics on correct substrate selection and substrate/inhibitor recognition and binding in two enzyme systems. These observations also emphasize the role of dynamic fluctuations in tuning the conformational landscape for efficient catalysis, and present a potential approach for using dynamics to modulate function and for designing better inhibitors in drug design.

This work was supported by the National Institute of General Medical Sciences (NIGMS) of the US National Institutes of Health (NIH) under award number R01GM105978 (to N.D.) and a Natural Sciences and Engineering Research Council of Canada (NSERC) Discovery Grant under award number RGPIN-2016-05557 (to N.D.). D.N.B. is the recipient of an NSERC Postgraduate Scholarships-Doctoral (PGS D) Award and N.D. holds a Fonds de Recherche Québec-Santé (FRQS) Research Scholar Junior 2 Career Award.

All authors made substantial contributions to the conception, design, and writing of this manuscript. All authors have read and approved the final version of the manuscript. 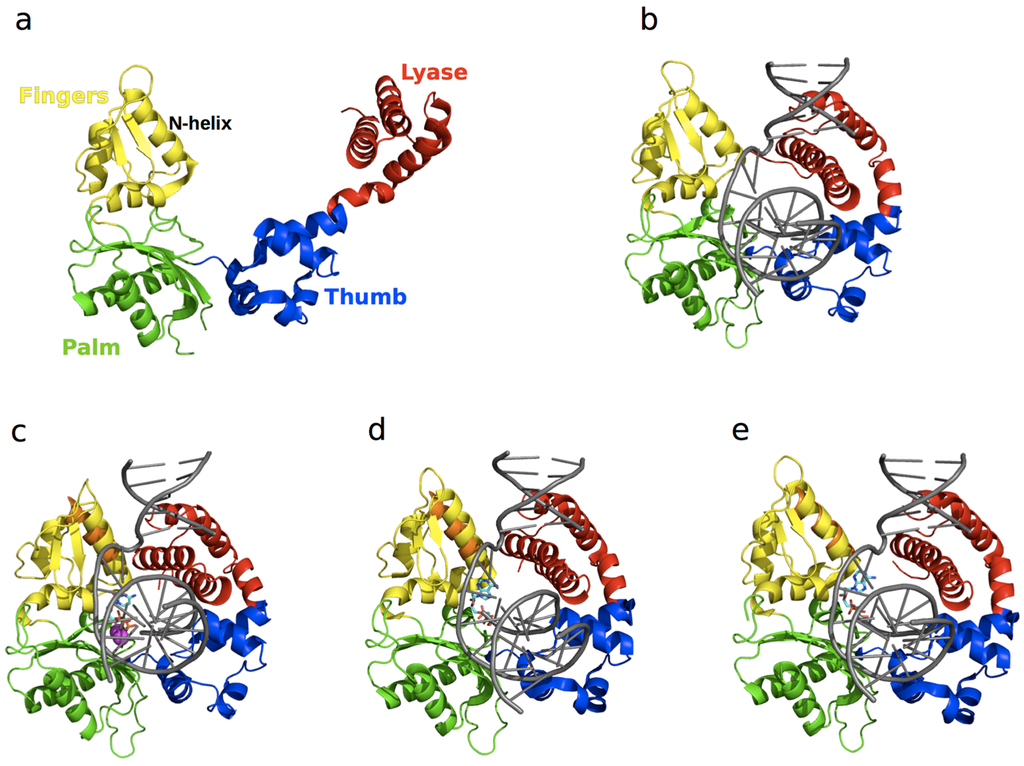