In this research, catalytic steam reforming of acetic acid derived from the aqueous portion of bio-oil for hydrogen production was investigated using different Ni/ATC (Attapulgite Clay) catalysts prepared by precipitation, impregnation and mechanical blending methods. The fresh and reduced catalysts were characterized by XRD, N2 adsorption–desorption, TEM and temperature program reduction (H2-TPR). The comprehensive results demonstrated that the interaction between active metallic Ni and ATC carrier was significantly improved in Ni/ATC catalyst prepared by precipitation method, from which the mean of Ni particle size was the smallest (~13 nm), resulting in the highest metal dispersion (7.5%). The catalytic performance of the catalysts was evaluated by the process of steam reforming of acetic acid in a fixed-bed reactor under atmospheric pressure at two different temperatures: 550 °C and 650 °C. The test results showed the Ni/ATC prepared by way of precipitation method (PM-Ni/ATC) achieved the highest H2 yield of ~82% and a little lower acetic acid conversion efficiency of ~85% than that of Ni/ATC prepared by way of impregnation method (IM-Ni/ATC) (~95%). In addition, the deactivation catalysts after reaction for 4 h were analyzed by XRD, TGA-DTG and TEM, which demonstrated the catalyst deactivation was not caused by the amount of carbon deposition, but owed to the significant agglomeration and sintering of Ni particles in the carrier. View Full-Text
Keywords: hydrogen production; steam reforming; Ni/Attapulgite; catalysts deactivation; agglomeration and sintering hydrogen production; steam reforming; Ni/Attapulgite; catalysts deactivation; agglomeration and sintering
►▼ Show Figures 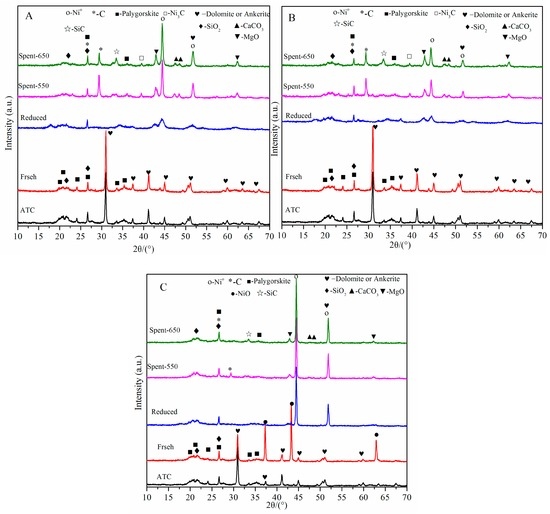