A thorough experimental optimization of supported ionic liquid catalyst (SILCA) was performed in order to obtain a stable and efficient catalyst for the Heck reaction. Out of fifteen proposed structures, propyl imidazolium bromide-tetramethylguanidinium pentanoate modified SiO2 loaded with PdCl2 appeared to be the most stable and to have a good activity in the reaction between butylacrylate and iodobezene, resulting in a complete conversion in 40 min at 100 °C, in four consecutive experiments. This study elucidated on the stability of the catalytic system with an ionic liquid layer during the catalyst synthesis but also under reaction conditions. In the bis-layered catalyst, the imidazolium moiety as a part of internal layer, brought rigidity to the structure, while in external layer pentanoic acid gave sufficiently acidic carboxylic group capable to coordinate 1,1,3,3-tetramethylguanidine (TMG) and thus, allow good dispersion of Pd nanoparticles. The catalyst was characterized by means of XPS, FT-IR, TEM, ICP-OES, ζ-potential, EDX, TGA, and 13C NMR. The release and catch mechanism was observed, whereas Pd re-deposition can be hindered by catalyst poisoning and eventual loss of palladium. View Full-Text
Keywords: supported ionic liquid catalyst (SILCA); palladium; Heck reaction; catalyst screening; optimization supported ionic liquid catalyst (SILCA); palladium; Heck reaction; catalyst screening; optimization
►▼ Show Figures 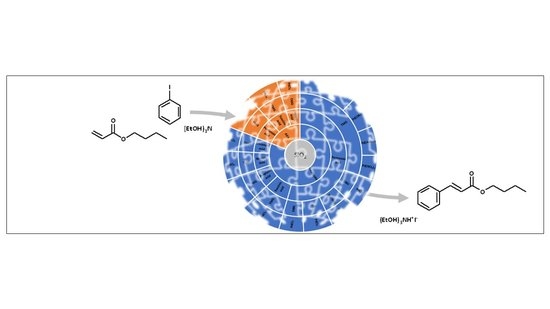