Reducing Immunoreactivity of Gliadins and Coeliac-Toxic Peptides Using Peptidases from L. acidophilus 5e2 and A. niger

Wheat storage proteins and products of their hydrolysis may cause coeliac sprue in genetically predisposed individuals with high expression of main histocompatibility complex HLA-DQ2 or DQ8, since by consuming wheat, they become exposed to proline- (P) and glutamine (Q)-rich gluten. In bread-making, the hydrolysis of gliadins and coeliac-toxic peptides occurs with varied efficiency depending on the fermentation pH and temperature. Degradation of gliadins catalysed by Lactobacillus acidophilus 5e2 peptidases and a commercial prolyl endopeptidase synthesised by A. niger, carried out at pH 4.0 and 37 °C, reduces the gliadin concentration over 110-fold and decreases the relative immunoreactivity of the hydrolysate to 0.9% of its initial value. Hydrolysis of coeliac-toxic peptides: LGQQQPFPPQQPY (P1) and PQPQLPYPQPQLP (P2) under the same conditions occurs with the highest efficiency, reaching 99.8 ± 0.0% and 97.5 ± 0.1%, respectively. The relative immunoreactivity of peptides P1 and P2 was 0.8 ± 0.0% and 3.2 ± 0.0%, respectively. A mixture of peptidases from L. acidophilus 5e2 and A. niger may be used in wheat sourdough fermentation to reduce the time needed for degradation of proteins and products of their hydrolysis. View Full-Text
Keywords: peptidase; prolyl endopeptidase; L. acidophilus; gliadin immunoreactivity; coeliac disease peptidase; prolyl endopeptidase; L. acidophilus; gliadin immunoreactivity; coeliac disease
►▼ Show Figures 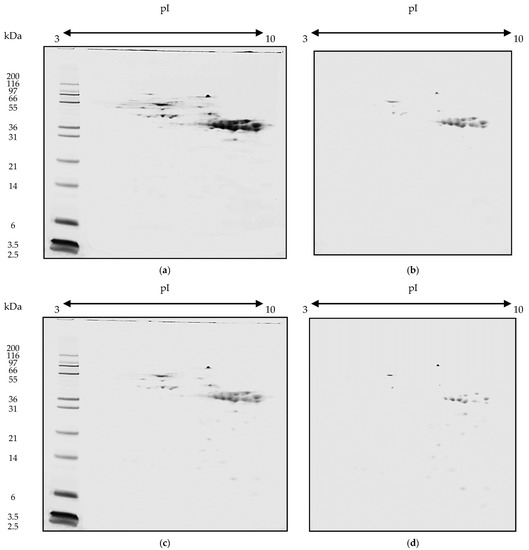