The Welfare Cost of Signaling
Next Article in Special Issue

The Evolution of Reputation-Based Cooperation in Regular Networks

We study, within the framework of game theory, the properties of a spatially distributed population of both predators and preys that may hunt or defend themselves either isolatedly or in group. Speciﬁcally, we show that the properties of the spatial Lett-Auger-Gaillard model, when different strategies coexist, can be understood through the geometric behavior of clusters involving four effective strategies competing cyclically,without neutral states. Moreover, the existence of strong ﬁnite-size effects, a form of the survival of the weakest effect, is related to a percolation crossover. These results may be generic and of relevance to other bimatrix games.

Cyclic dominance is an important mechanism underlying the coexistence of competing species or strategies in several different contexts [1,2]. When one or more intransitive loops are present in the effective flux graph that contains information on how those species interact, the hierarchy introduced by other transitive loops may be attenuated, enhancing the conditions for the persistent survival of several species. The simplest, one loop example is the Rock-Paper-Scissors (RPS) game in which all three species have one prey and one predator each. Generalizations with more than three species may have more overlapping loops, some of which may be transitive, and introduce asymmetries and heterogeneities. When interacting with an odd number of other species, the symmetry between preys and predators is broken. Not only the number of preys and predators may be different, but this may change from one species to the other, one having more preys while other, more predators. As a consequence of this non-homogeneity, the flux graph is not invariant upon a permutation of labels. In addition to those games in which cyclic dominance is explicitly included in the flux graph, in some cases it may emerge from the payoff matrix. One example is three-strategies games with optional participation: Although not explicit in the payoff matrix, dominance emerges in the presence of these agents that do not follow the rules of the game and prefer, instead, to earn a smaller payoff [3]. Another scenario in which cyclic dominance appears is among preys and predators choosing, respectively, their hunt and defense strategy while trying to outcompete each other [4]. Predators may attack in a cooperative, coordinated way, with their actions being correlated in space and time [5]. There are several examples of such group hunting, including lions [6,7,8,9], hawks [10], crocodiles [11], spiders [12,13], and several other species [5]. Interspecies collaborations exist as well: Fishermen and dolphins in the south of Brazil [14,15] or honey-hunters and honey-guides in Mozambique [16], among others [17]). Group hunting may improve the capability of capturing a large prey [18], defending the carcass from other predators [19], spotting and chasing preys [20], etc. In opposition, there may be costs as well: Resources should be shared between members of the group, searches focus on a smaller territory, etc. Grouping tactics may also benefit preys [21] by improving: Surveillance [22,23,24], hiding [25,26], distraction [27], intimidation, etc. On the other hand, a group of preys may be more easily spotted than an isolated one and the resources should be shared by all members [28,29].
Game theory and the replicator equation [1,30,31,32] were used to model coordinated hunting by Lett et al. [33] in a fully mixed system. The number of preys and predators were assumed constant but the fractions of each population using either an individual or collective strategy could vary (see also Refs. [34,35]). The main hypothesis is that grouping, for preys, lowers their risk of being preyed but increases the competition for resources, while predators have a greater probability of success at the expense of having to share the prey with others, sometimes referred to as the “many-eyes, many mouths” trade off [28,29]. Recently, Cazaubiel et al. [4] revisited the model and proposed a spatial version with local interactions and binary strategies, unveiling the mechanism underlying the stability of the coexistence phase. In this version, all predators in site i may form a single group () or hunt independently (), while the preys have a similar behavior (). Thus, the four possible combinations for each site are (): 00, 01, 10 and 11. Interestingly, these strategies obey cyclic dominance relations leading to persistent coexistence for a broad set of parameters [4]. This behavior is reminiscent of the generalizations of the RPS game with more than three species [1,2].
In this paper we further explore the spatial version of the model by quantifying some geometrical and percolative properties of the clusters formed by the above four strategies. When neighboring sites have the same strategy (for both x and y), we say they belong to the same geometrical cluster. Once a cluster spans the whole system, it is said to percolate. Whether or not such percolating clusters exist for a given finite-size realization of the system will have a strong role in its dynamics. In particular, the existence of a size dependent percolation crossover helps to understand, as a realization of the survival of the weakest principle [36], the strong finite-size effects presented by the model.

The more general version of the model proposed by Lett et al. is fully described in Refs. [4,33]. We here present, as also done in Refs. [4,33], a simplified version in which we reduce the number of free parameters to only two. We consider no reduction in resource intake by the preys when they are grouped ( in the notation of Ref. [33]). Each group of predators is formed by three agents and capture two preys each time they succeed. We also assume that the probability p of a group capturing a lone prey is 1/2. The remaining parameters are the loss of preying efficiency due to grouped preys () and when hunting alone ().
While both populations keep a fixed size, the densities of grouped predators, , and preys, , may increase or decrease depending on how their payoff compare with the average payoff of the respective population. It is indeed the difference between the payoff and its average that drives the evolution of x (and, analogously, for and y). For example, if collective hunting earns a larger payoff than the average, and increases. Preys and predators have distinct payoff matrices (the game is asymmetric [30]), given respectively by matrices [33] B and A in Table 1.
As an example, the element of A is the accumulated payoff of grouped predators when attacking a group of preys (the rate of success is with two preys being captured and shared among the three predators). We refer the interested reader to Refs. [4,33] for a detailed discussion of each element of these matrices. Thus, the replicator equations, and , giving the rate at which these two densities evolve in time, may be written as [30,33]: where
Equation (1) has five fixed points [33]: The vertices of the unit square, , and the coexistence state given by:
Multiplying the numerator and denominator of Equation (3) by we see that in order to have , otherwise is attracted either to 0 or 1. Analogously, for in Equation (4) it is necessary that . Thus, the asymptotic state is determined only by the signs of , , and [30]. While is always positive, , and change sign at , and , respectively, locating the mean-field transition lines between the diverse phases of the system. The homogeneous, absorbent phases occur either when ( or ) or (). The only region left is and . In this region, from the stability analysis [33], the system evolves along closed orbits around the center and the strategies 0 and 1 coexist. It is interesting to notice that fully individualistic (00) sites are only possible, along with the other strategies, in this coexistence phase. As expected, preys are grouped when α is small and collective hunting is very ineffective against them, whatever the value of β. Similarly, for small values of β it does not pay to hunt alone, leading to cooperating predators for all values of α.
The above description assumes fully mixing and does not take into account possible spatial correlations and geometric effects. Therefore, we consider an agent based version with local interactions between the nearest-neighbors sites on a square lattice (self-interaction are included since each site has both predators and preys) with sites [4]. The size of the unit cell corresponds to the smallest viable group and on each site of the lattice there is a certain constant number of predators that may (or not) organize into such a group. The same happens for the preys. The state of those agents is represented by the variables (predators) and (preys), both assuming the values 1 or 0, whether they are grouped or not, respectively. At each step of the simulation, the predators on a randomly chosen site (i) interact with the preys in i and in all neighboring sites, accumulating as given by matrix A in Equation (1). Similarly, the preys in i accumulate using matrix B in Equation (1). In parallel, both predators and preys on a random neighbor of i (j) also accumulate their payoffs. The probability that the agents in site i adopt the strategy of those in site j (or vice versa) is proportional to the difference of payoffs. For example, for predators (and analogously for preys), if , the probability that takes the value of is: where is the maximum value of the accumulated payoff of the predators for the chosen parameters. This rule is known to recover the replicator equation when passing from the microscopic, agent based level to the macroscopic, coarse grained one [1].

Predators and preys, as a consequence of their continuous struggle for survival, may develop complex foraging and defense strategies. In this paper we explored the mechanisms sustaining the coexistence of individual and collective strategies used by spatially distributed populations of hunters and preys using the model introduced by Lett et al. [33]. In particular, agents not only form local groups (in each site) but these groups organize on larger scales forming clusters whose percolative properties seem relevant for the persistent coexistence in finite systems. This organization, that initially may be located in space and have short duration in time, can eventually unfold into more complex forms of sociability [41,42,43].
A further extension, that is related to the interesting phenomena caused by the change of the flux graph within the parameter space, is to consider spatially heterogeneous cyclic competition models, in which different regions of the system (or different agents) may play following different graphs. This may be relevant in complex landscapes where the prey-predator relations may change, or even be reversed [44], depending under which conditions the competitors interact. Another point to be explored in the future is the connection of this model with physical and chemical models presenting a transition between an active, coexistence steady state and an absorbing state (the Ziff-Gulari-Barshad [45] is an example, among many others [46]).

J.A. conceived and designed the study; A.L. and A.C. performed the simulations; A.L., A.C. and J.A. analyzed the data; J.A. wrote the paper. 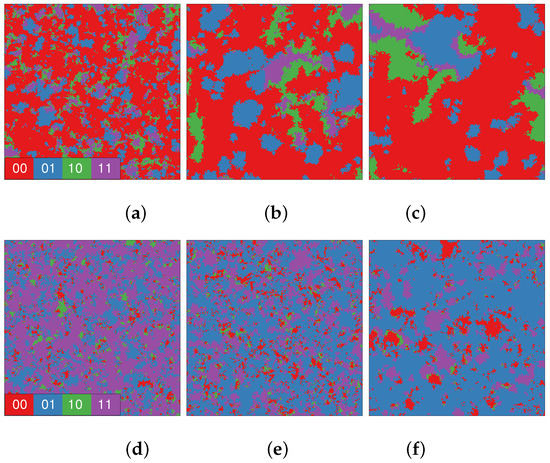 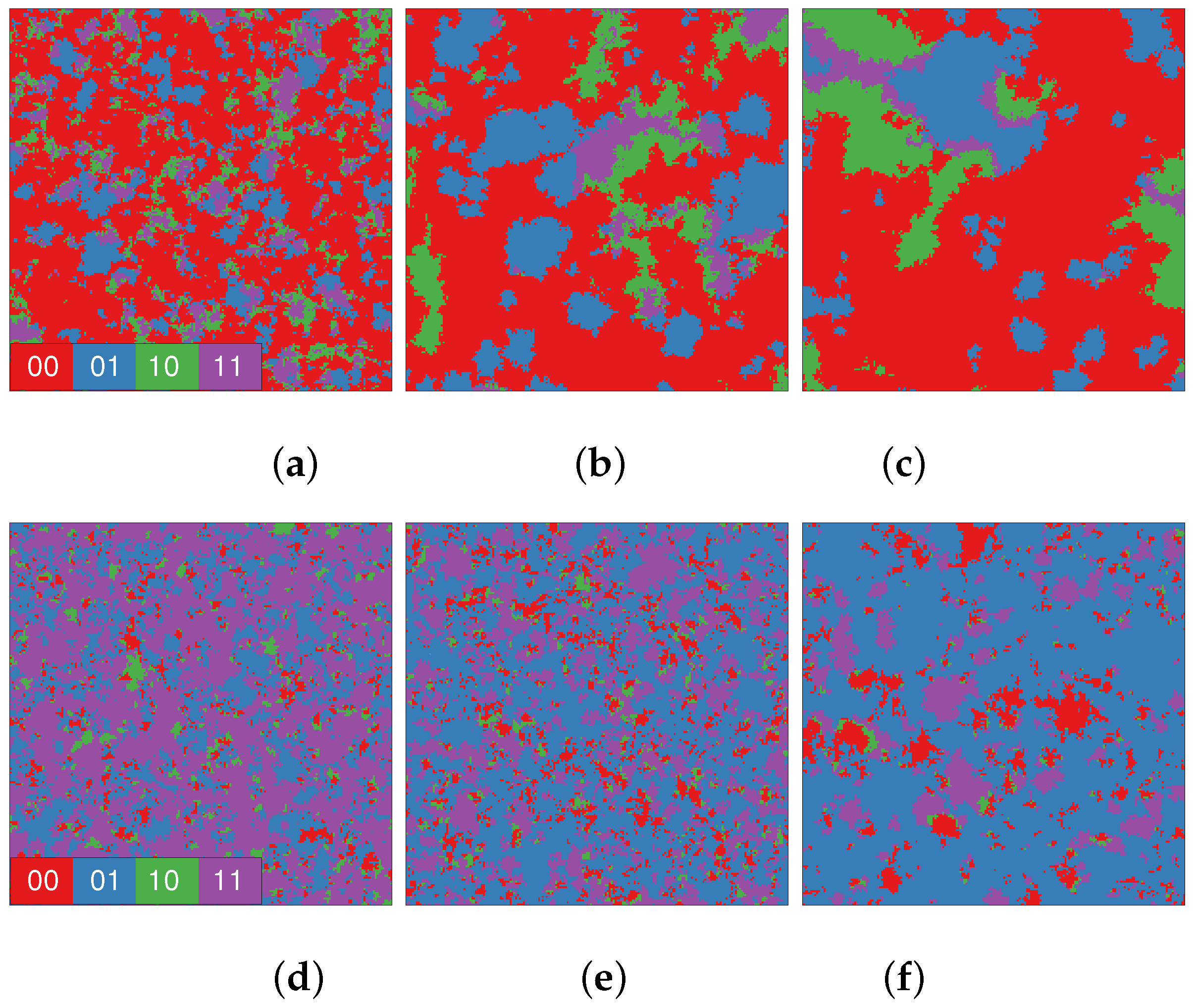