Anger Management: Aggression and Punishment in the Provision of Public Goods

Researchers are increasingly exploring the role of emotions in interactive decision‐making. Recent theories have focused on the interpersonal effects of emotions—the influence of the decisionmaker’s expressed emotions on observers’ decisions and judgments. In this paper, we examine whether people assess others’ risk preferences on the basis of their emotional states, whether this affects their own behavior, and how this assessment matches others’ actual behavior. To test these ideas, we used an experimental Stag Hunt game (n = 98), and included non‐trivial financial consequences. Participants were told (truthfully) that their counterparts’ previous task had left them happy, fearful, or emotionally neutral. People who were told their counterparts were fearful reported that they expected less risky decisions from these counterparts than people told their counterparts were neutral or happy. As a result, given that the Stag Hunt is a coordination game, these participants were themselves less risky. Interestingly, these participants’ expectations were not accurate; thus, coordination failed, and payoffs were low. This raises the possibility of a “curse of knowledge” whereby one player’s erroneous beliefs about the effects of the counterpart’s emotional state leads the first player to make poor action choices. View Full-Text
Keywords: emotions; beliefs; risk preferences; risk taking; fear; behavioral game theor emotions; beliefs; risk preferences; risk taking; fear; behavioral game theor
►▼ Show Figures 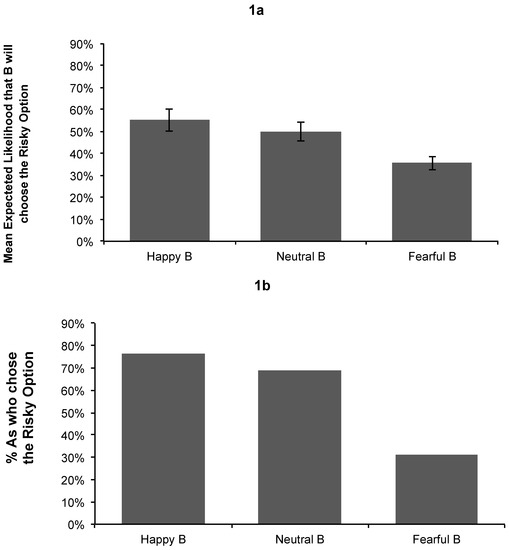