Introduction to the Special Issue Political Games: Strategy, Persuasion, and Learning
Next Article in Special Issue

The purpose of this study is to experimentally test Trockel’s game, which is a modelling of the classical Chain Store Game (CSG), and determine whether one of the two theories of Equality and Deterrence may better account for the observed behavior. The CSG is an example of a simple game in extensive form where the actual behavior of well-informed players cannot be expected to agree with the clear results of game theoretical reasoning. To explain the disagreement between the theory and the expected behavior, Trockel’s game is proposed as an alternative modelling of the scenario. The existence of more than one equilibrium in Trockel’s game opens a door for reputation building. This study is the first attempt to experimentally test this alternative game with the same purpose. According to my data, there is some evidence in favor of both Equality and Deterrence Hypotheses. However, since the strategies compatible with the Equality Hypothesis are played more frequently, I observe some patterns which share the same intuition with the Deterrence Hypothesis. View Full-Text
Keywords: Chain Store Game; reputation building; entry deterrence; Trockel’s game Chain Store Game; reputation building; entry deterrence; Trockel’s game
►▼ Show Figures 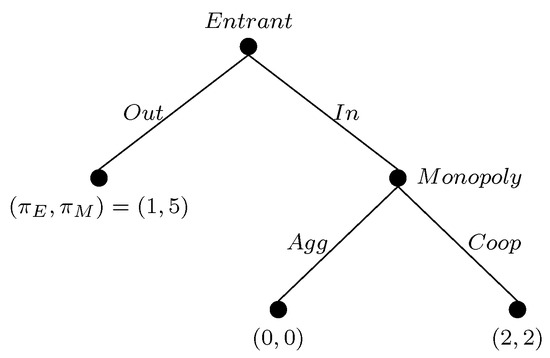