Most existing approaches for solving the distributed denial-of-service (DDoS) problem focus on specific security mechanisms, for example, network intrusion detection system (NIDS) detection and firewall configuration, rather than on the packet routing approaches to defend DDoS threats by new flow management techniques. To defend against DDoS attacks, the present study proposes a modified particle swarm optimization (PSO) scheme based on an IP traceback (IPTBK) technique, designated as PSO-IPTBK, to solve the IP traceback problem. Specifically, this work focuses on analyzing the detection of DDoS attacks to predict the possible attack routes in a distributed network. In the proposed approach, the PSO-IPTBK identifies the source of DDoS attacks by reconstructing the probable attack routes from collected network packets. The performance of the PSO-IPTBK algorithm in reconstructing the attack route was investigated through a series of simulations using OMNeT++ 5.5.1 and the INET 4 Framework. The results show that the proposed scheme can determine the most possible route between the attackers and the victim to defend DDoS attacks. View Full-Text
Keywords: DDoS; particle swarm optimization; IP traceback; OMNeT++; attack route DDoS; particle swarm optimization; IP traceback; OMNeT++; attack route
►▼ Show Figures 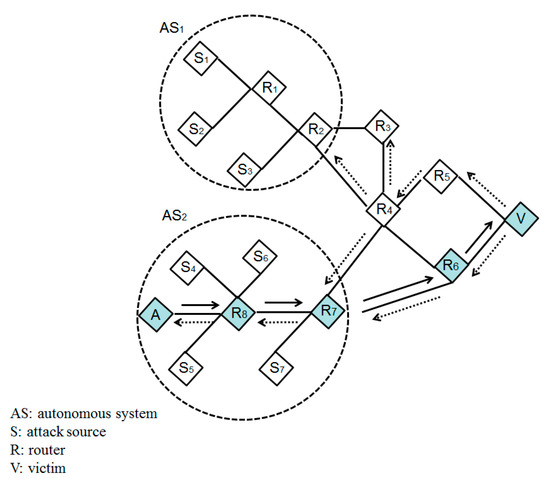