Surface electromyographic (sEMG) activity of the biceps muscle was recorded from 13 subjects. Data was recorded while subjects performed dynamic contraction until fatigue and the signals were segmented into two parts (Non-Fatigue and Fatigue). An evolutionary algorithm was used to determine the elbow angles that best separate (using Davies-Bouldin Index, DBI) both Non-Fatigue and Fatigue segments of the sEMG signal. Establishing the optimal elbow angle for feature extraction used in the evolutionary process was based on 70% of the conducted sEMG trials. After completing 26 independent evolution runs, the best run containing the optimal elbow angles for separation (Non-Fatigue and Fatigue) was selected and then tested on the remaining 30% of the data to measure the classification performance. Testing the performance of the optimal angle was undertaken on nine features extracted from each of the two classes (Non-Fatigue and Fatigue) to quantify the performance. Results showed that the optimal elbow angles can be used for fatigue classification, showing 87.90% highest correct classification for one of the features and on average of all eight features (including worst performing features) giving 78.45%.
Keywords: genetic algorithms; localised muscle fatigue; electromyography; wavelet analysis; pseudo-wavelets; elbow angle genetic algorithms; localised muscle fatigue; electromyography; wavelet analysis; pseudo-wavelets; elbow angle

In this research sEMG signals were recorded emanating from the biceps brachii during fatiguing dynamic contractions. The GA selected the optimal elbow angle for fatigue classifications using a previously developed pseudo-wavelet as a feature extraction method [23,29,30,31]. The GA used 26 evolutionary runs to determine the optimal (best separate Non-Fatigue and Fatigue) joint angle window for the best sEMG signal classification. The DBI decided the separation between the two classes (Non-fatigue and Fatigue). For comparison purposes, the classification performance of eight other traditional parameters was also included together with the classification performance of the pseudo-wavelet.

Thirteen athletic, healthy male subjects (mean age year) volunteered for this research. The study was approved by the University of Essex’s Ethical Committee and all subjects signed an informed consent form prior to taking part in the study.
The participants, all non-smokers, were seated on a “preacher” biceps curl machine to ensure stability and bicep isolation performing the biceps curl tasks. The participants reached physiological fatigue and were encouraged during the trial to reach the complete fatigue stage (unable to continue the exercise).
To evaluate the Maximum Dynamic Strength (MDS) percentage for each participant we used the average of three 100% MDS measurements on three different days to ensure correct estimation. The 100% MDS measurements for each subject were determined by the one-repetition maximum (1 RM), where the subjects managed to keep the correct technique while executing the repetition with the heaviest possible load on a preacher biceps curl machine. In other words 100% MDS is equal to 1 RM. Determining each subject’s 100% MDS allowed estimation for the correct loadings for MDS (40% MDS and 70% MDS) across subjects when conducting the trials.
After establishing the MDS for each subject the trials were carried out. The subjects carried out several submaximal warm-up contractions of the biceps brachii, until the subjects felt comfortable to continue with the trials. After a 2 min resting period, all the 13 participants carried out 3 trials of dynamic exercises with 40% Maximum Dynamic Strength (MDS) and 3 trials of 70% MDS with a one week resting period between trials to ensure full recovery from the bicep fatigue, giving a total of 78 trials. Only one trial was performed per day for each subject in order to avoid injury.
sEMG electrodes (Biometrics Ltd., Newport, UK, Model SX230W). were placed on the participant’s biceps brachii’s lower belly, avoiding the estimated innervation zone and toward the distal tendon to acquire sEMG reading. These electrodes were chosen due to their high quality, designed with an input impedance of more than ohms. The goniometer (Biometrics Ltd., Newport, UK) was placed on the lateral side of the arm to measure the elbow angle and arm oscillation.
The myoelectric signal was recorded using one two-channel Single Differential (SD) electrodes (Biometrics Ltd., Newport, UK), (both placed on the biceps brachii with a distance of 2 cm [32]) with A/D conversion at 2000 samples/s. The sEMG signals underwent a rectification and filtering process. The signals were filtered with a dual pass Butterworth filter of order 5, with the pass band being between 10 and 500 Hz. All movement aspects were recorded simultaneously. The goniometer signal has been filtered to remove noise and small oscillations. This has been rectified and calibrated to zero at full elbow extension.
The full range of motion was recorded during the elbow flexor exercises, with the range from 0 (fully extended elbow) to an estimated 150 degrees (fully flexed elbow). The angles vary between subjects due to the differences in physiology. All angles were tested in this research; however, it was the GA that selected the optimal elbow angles, which are shown in the results.

The sEMG signals were labelled by dividing them into Fatigue and Non-Fatigue epochs. In the beginning of the tasks, when the subjects felt “fresh”, it was understood that the recorded signal indicated Non-Fatigue. Therefore the first repetition was labelled as Non-Fatigue, while the last full repetition was labelled as Fatigue. After the last full repetition, the subjects were unable to continue the set task, hence fatigue had occurred. This labelling method is adapted according to Kumar et al. [11]. The labelling of the signals was later used to train and test the classifier.

A Genetic Algorithms (GA) solves linear and nonlinear problems [33]. The GA utilised a pseudo-wavelet (previously evolved by our research group [23,29,30,31]) as the feature extraction technique to determine the optimal elbow angle from sEMG signals, which successfully distinguished between Non-Fatigue and Fatigue classes of the recorded signal. Table 1 displays the parameter settings for the GA runs.

Table 1. Parameter settings for the Genetic Algorithm (GA) runs.
The GA uses the fitness function to detect the best suited elbow angle in the search space. The modified Davies Bouldin Index (DBI) was used in the fitness function due to it being a simple and effective index. By using modified DBI [34] a calculation of data cluster linear overlap was done by determining the ratio of intracluster spread to intercluster centroid distance. For the DBI, the joint-time frequency decomposition of the pseudo-wavelet utilised every scale and was extracted in one second intervals. Smaller DBI values was an indication of excellent class separation. In this research, the hill climbing technique was reversed by changing the DBI to negative numbers, where the fitness function utilised the hill climbing technique by aiming to obtain the negative DBI closer to zero.

To find the optimal elbow angle for fatigue detection in the biceps brachii, the GA used the pseudo-wavelet as the feature extraction technique. The pseudo-wavelet used in this study has been developed in previous studies [23,30]. A window of the sEMG signal was chosen based on the starting elbow angle and the ending elbow angle. The starting and ending elbow angle (a window) was decided by the evolutionary process of the GA, by testing the difference (DBI) of the two fatigue stages (Fatigue and Non-Fatigue). The testing facilitated the evolutionary processes by aiming to decrease the DBI, which then enabled the fitness function to maximise the separation between Fatigue and Non-Fatigue. As mentioned, the DBI was changed into negative numbers, enabling the fitness function to use the hill climbing method by trying to obtain (now) negative DBI numbers that are close to zero. The starting and ending angles that generated the best separation of the sEMG signal were later utilised in the classification stage.
Figure 1a displays a single rep when the muscle was fresh (Non-Fatigue) indicating the starting and ending joint angles for one of the subject trials using the best GA run. Figure 1b shows the same joint angles in a fatiguing rep.

70% of the completed sEMG trials were used for training purposes to determine the optimal elbow angle for feature extraction in the evolutionary computation. The run with the best separation index was chosen, then used in the testing phase with the rest of the 30% of the sEMG signals to calculate the classification performance.
For a comparison between the evolved pseudo-wavelet and eight other feature extraction methods, LDA (linear discriminant analysis) was chosen as the classification method due to its simplicity, being well established and light on computational resources. The input for the training and testing of the LDA classifier was based on the eight parameters derived from the sEMG signal.

Table 2 displays the 26 evolutionary runs that generated the optimal (best separate Non-Fatigue and Fatigue) joint angle window with the optimal sEMG signal classification. In the table, the best run is highlighted, which was GA run 19. The window of the joint angles ranged from 45.02 to 60.63, giving the best DBI between Fatigue and Non-Fatigue with a separation index of −0.473.

Table 2. GA runs with the optimal Davies Bouldin Index (DBI).
Figure 2 illustrates a scatter plot Figure 2a of the results shown in Table 2. Additionally, Figure 2b displays a histogram of the joint elbow angles, where the frequency of joint elbow angles chosen by all the GA runs are shown. 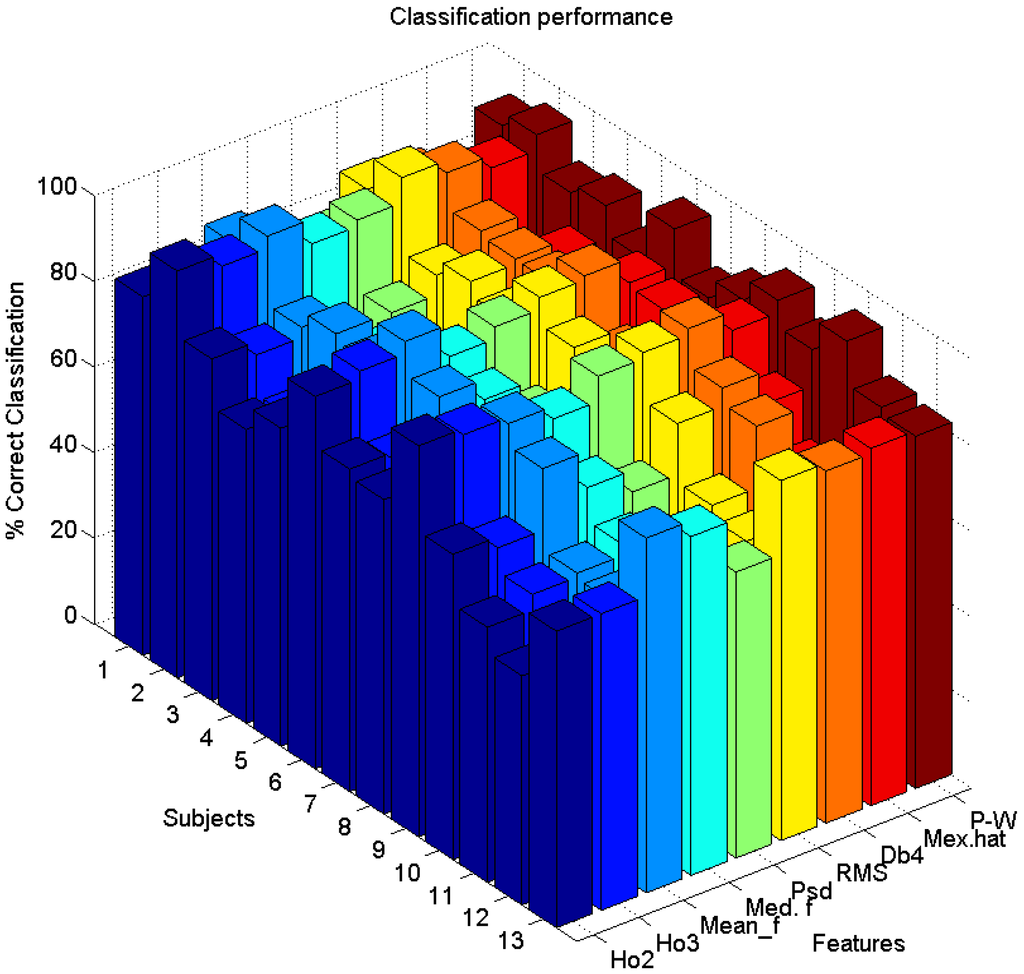 This work was supported and funded by Kuwait University Research Grant No. QS01/14.

Mohamed R. Al-Mulla led the study, performed the experiments and data analysis and led the writing of the paper. Francisco Sepulveda made recommendations on the methodology towards compliance with scientific and ethical standards, provided the equipment for the experiments, and helped with the content and language in the paper manuscript. Bader Al-Bader helped with the contents, language and the graphics within the paper. All authors have read and approved the final manuscript.