Class (I) Phosphoinositide 3-Kinases in the Tumor Microenvironment

Dissecting the cellular signaling that governs the motility of eukaryotic cells is one of the fundamental tasks of modern cell biology, not only because of the large number of physiological processes in which cell migration is crucial, but even more so because of the pathological ones, in particular tumor invasion and metastasis. Cell migration requires the coordination of at least four major processes: polarization of intracellular signaling, regulation of the actin cytoskeleton and membrane extension, focal adhesion and integrin signaling and contractile forces generation and rear retraction. Among the molecular components involved in the regulation of locomotion, the phosphatidylinositol-3-kinase (PI3K) pathway has been shown to exert fundamental role. A pivotal node of such pathway is represented by the serine/threonine kinase 3-phosphoinositide-dependent protein kinase-1 (PDPK1 or PDK1). PDK1, and the majority of its substrates, belong to the AGC family of kinases (related to cAMP-dependent protein kinase 1, cyclic Guanosine monophosphate-dependent protein kinase and protein kinase C), and control a plethora of cellular processes, downstream either to PI3K or to other pathways, such as RAS GTPase-MAPK (mitogen-activated protein kinase). Interestingly, PDK1 has been demonstrated to be crucial for the regulation of each step of cell migration, by activating several proteins such as protein kinase B/Akt (PKB/Akt), myotonic dystrophy-related CDC42-binding kinases alpha (MRCKα), Rho associated coiled-coil containing protein kinase 1 (ROCK1), phospholipase C gamma 1 (PLCγ1) and β3 integrin. Moreover, PDK1 regulates cancer cell invasion as well, thus representing a possible target to prevent cancer metastasis in human patients. The aim of this review is to summarize the various mechanisms by which PDK1 controls the cell migration process, from cell polarization to actin cytoskeleton and focal adhesion regulation, and finally, to discuss the evidence supporting a role for PDK1 in cancer cell invasion and dissemination. View Full-Text
Keywords: 3-phosphoinositide dependent protein kinase-1 (PDK1); phosphatidylinositol-3-kinase (PI3K); cell migration; cancer 3-phosphoinositide dependent protein kinase-1 (PDK1); phosphatidylinositol-3-kinase (PI3K); cell migration; cancer
►▼ Show Figures 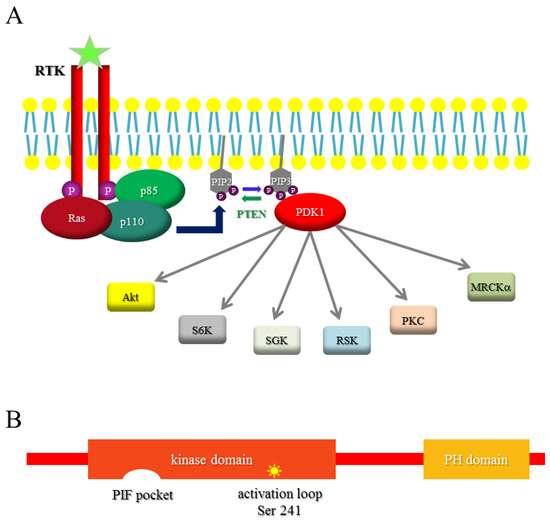