In Table 5, the clinicopathological features of breast cancer were assessed to determine association with 25(OH)D3 levels. The data showed that African-American women with triple negative breast cancer (TNBC) had the lowest 25(OH)D3 levels. Logistic regression with multivariate analysis adjusted for BMI, age at the time of diagnosis and seasons of blood draw, showed that the serum 25(OH)D3 level below 20 ng/mL had a significant association with TNBC type of tumor in African-American women (OR = 5.4, p = 0.02) (Table 6).
The level of 25(OH)D3 had no association with either ER/PR+/HER2− tumor or ER/PR−/HER2− tumor. There were no significant differences in the 25(OH)D3 levels among the different ER/PR, HER2 status, tumor size, lymph node involvement, and tumor stages in both African-Americans and Hispanics groups (Table 5). As shown in Table 5 African-American women with breast cancer overall had significantly lower levels of 25(OH)D3.
The Cox regression with univariate and multivariate analysis adjusted for ethnicity, ER/PR/HER2 receptors, tumor size, node involvement, BMI, age at the time of diagnosis and the seasons of blood draw were performed to assess the relative risk (RR) for reducing disease-free survival (DFS) and overall survival (OS).
The relative risk (RR) for DFS increases with decrease in the levels of 25(OH)D3 per quartile. Univariate analysis (Table 7) showed that patients who had 25(OH)D3 level between 13 ng/mL and 23 ng/mL had 2.3-fold risk of cancer relapse or metastases compared to patients with the level above 23 ng/mL (p ≤ 0.03). Patients with 25(OH)D3 level ≤ 12 ng/mL also increase RR to 1.7, however, it was not statistically significant and this may be due to less number of patients in this quartile. Similar trend was seen in RR for overall survival (OS) (Table 7). Multivariate analysis in Table 7 showed that the RR for reducing DFS still remained as 2.2 to 1.9 when the 25(OH)D3 levels were below 20 ng/mL, and the RR for reducing OS was also increased per quartile decreasing the level of 25(OH)D3 (Table 7). However, when the analysis performed by stratifying ethnicity no significant association was found between the level of 25(OH)D3 level and the disease-outcome (DFS and OS) in either African-Americans or Hispanics.

The study population was recruited from SPA6 region of South Los Angeles County in California. The population by race/ethnicity in SPA6 are 28% African-American, 68% Hispanic/Latino, and 4% others that include Caucasian, Asian, Native-American and Pacific-islander. The cohort comprised of women examined in the Mammography Clinic or the Hematology/Oncology Clinic at the Martin Luther King Ambulatory Care Center (MACC, formerly known as King-Drew Medical Center) between 1995 and 2007. Women were consented for an ongoing breast cancer study conducted in the Division of Cancer Research and Training at Charles R. Drew University of Medicine and Science and MACC. The study was approved by the Institutional Review Board. For follow up data, we conducted post-hoc medical records abstraction.
Figure 2 summarized the process of selecting the subset of subjects for this study from total number of women (n = 1400). Those women were consented for the breast cancer study. The inclusion/exclusion criteria were the following: (a) Self-identified race/ethnicity: from self-report, 30% were African-American, 65% were Hispanic, and the remaining 5% were Caucasian or Asian subjects. Considering the subjects from Caucasian and Asian were relative small that will not generate meaningful analysis we only included African-American and Hispanic women in this study. When the African-American and Hispanic ethnicity criteria were applied, n = 1330 women met the criteria; (b) Confirmation of breast cancer: For cases, breast cancer status was determined by biopsy/pathology confirmed neoplasm of the breast, and only subjects who had documentation of this information were included in the study (n = 368). For controls, normal was determined by normal mammogram results, and benign was determined by mammogram and biopsy confirmed non-cancer (i.e., benign breast disease) (n = 962); (c) Baseline blood sample (serum sample collected at the time of diagnosis and prior to any cancer treatment for cases), documentation of age at the time of sample collection. A total 940 samples were available (330 cases and 610 controls); We selected (d) cases with documented disease follow-up information and controls with benign disease having 2-years follow-up mammography information for assessing level of 25(OH)D2, 25(OH)D3 and total vitamin D. (cases = 243 and controls = 417; total n = 660).

To measure circulating 25-hydroxyvitamin D levels a total 150 µL of serum samples prior to any cancer treatment (average 4 weeks prior treatment) was sent to a Quest-Diagnostics™ laboratory. The serum 25(OH)D2, 25(OH)D3 and total level of 25(OH)D were measured using a Liquid Chromatography/Tandem Mass Spectrometry (LC/MS/MS) method. The 25(OH)D3 indicates both endogenous production and supplementation. The 25(OH)D2 is an indicator of exogenous sources such as diet or supplementation. The total vitamin D is a combination of 25(OH)D2 and 25(OH)D3. The level of 25(OH)D2 was lower than 4 ng/mL (out of range for determination) in 88% of the subjects from our cohort. To obtain the meaningful statistical analysis the level of 25(OH)D3 was used for the study analysis. The level of vitamin D was considered “deficiency” if the 25(OH)D3 level < 20 ng/mL, “insufficiency” if the 25(OH)D3 level at range from 20 ng/mL to 29 ng/mL, or sufficiency if otherwise for this study. The 25(OH)D3 levels were also calculated according to the quantiles (25-quantile < 12 ng/mL, 50-quantile = 19 ng/mL, 75-quantile = 26 ng/mL) for assessing predicted probability of breast cancer and for assessing RR of reducing DFS and OS for breast cancer patients.

The information on ethnicity was based on self-report and age at the diagnosis/recruitment, Body Mass Index (BMI) and clinical information were obtained through medical chart extraction. Estrogen and progestogen receptors (ER/PR) status was considered “Positive” if > 5% of tumor cell nuclei immunoreactive, or “Negative” if otherwise. HER2 (HER2/nu) status was considered “Positive” if HER2 = 3+, “Negative” if HER2 = 0, 1+, 2+, determined by immunohistochemistry or assigned using in situ hybridization to assess HER2 gene amplification. Tumor size, lymph node status and TNM staging were all determined according to AJCC definitions. Tumor subtype was categorized according to the status of receptors and as follows: (i) ER/PR+/HER2−; (ii) HER2+ (ER/PR− or ER/PR+); (iii) Triple negative (ER/PR−/HER2−).

Survival and disease outcome in the study were assessed by 5 year DFS and 5 year OS. DFS was assessed based on screening tests such as mammography, CT scan, Ultrasounds, Bone-scans that the patient underwent after treatment and resolution of the primary cancer. DFS for a patient was defined as not having any of the following: (1) Reoccurrence; (2) Metastatic disease; (3) New primary tumor formation at another organ site. OS was calculated from the time of diagnosis to death from breast cancer.

Statistical analysis was performed using SPSS software (IBM SPSS Statistics version 22, SPSS, Inc., Chicago, IL, USA). The level of 25(OH)D3 was analyzed as both continuous variable (median and mean ± SD) and categorical variable (<20 ng/mL or ≥20 ng/mL). The statistical differences of 25(OH)D3 level among different ethnic, age group (categorised as 10 years group), BMI (categorised as obese: BMI ≥ 30, Overweight: BMI: 26–29, normal: BMI ≤ 25, no subjects’ BMI < 18.5 in this cohort). The statistical significance was evaluated by using ANOVA for mean, Mann-Whitney U test for median age and median BMI. The associations of the deficiency of 25(OH)D3 with ethnicity, age group and BMI were assessed throughout using the χ2-test and the p-values from χ2-test were adjusted with Bonferroni correction. Logistic regression with univariate and multivariate analysis were used to assess the association of deficiency in 25(OH)D3 level with breast cancer in the total and ethnically sub-categorized cohort. The multivariate analysis for the association between deficiency of 25(OH)D3 and breast cancer in the total cohort was adjusted for age, ethnicity, BMI and the seasons of blood draw. The association for ethnically sub-categorized cohort was adjusted for age, BMI and the seasons of blood draw. The level of 25(OH)D3 was also categorized by percentiles based on the distribution of 25(OH)D3 in controls. The probability of breast cancer in African-American and Hispanic was predicted by Logistic Regression according to the percentiles of 25(OH)D3 and the linear trends of the predicted probability was estimated using Regression Curve estimation. The significant differences of the trends of predicted probability between African-American and Hispanic was determined by Wilcoxon signed-rank test.
The associations of 25(OH)D3 levels with breast cancer subtypes were also determined by Logistic regression with multivariate analysis adjusted for age, BMI and the seasons of blood draw. Relative Risk (RR) of 25(OH)D3 levels for reducing DFS and OS was assessed by Cox regression with multivariate analysis adjusted for ER/PR/HER2 status, tumor size, node involvement, tumor stages, BMI, the seasons of blood draw and the age at the time of diagnosis. The 25(OH)D3 levels were categorized by quartiles based on the distribution of 25(OH)D3 level in cases and the RRs were evaluated with the level of 25(OH)D3 per quartile. Throughout all analyses, only the p < 0.05 was considered statistically significant.

Data from our study supports the hypothesis that the 25(OH)D3 level below 20 ng/mL was significantly associated with risk of breast cancer. The level of 25(OH)D3 below 26 ng/mL predicts a decrease in disease-free survival, but it was not an independent predictor. The level of 25(OH)D3 below 20 ng/mL was fund to be associated with TNBC in African-Americans. Further studies on the relationship between 25(OH)D3 level and breast cancer risk are warranted. 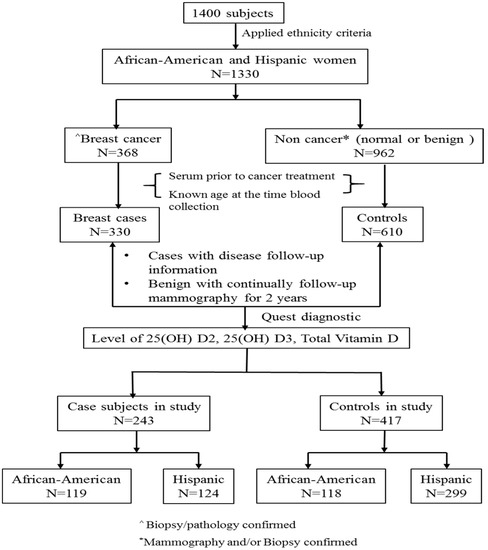 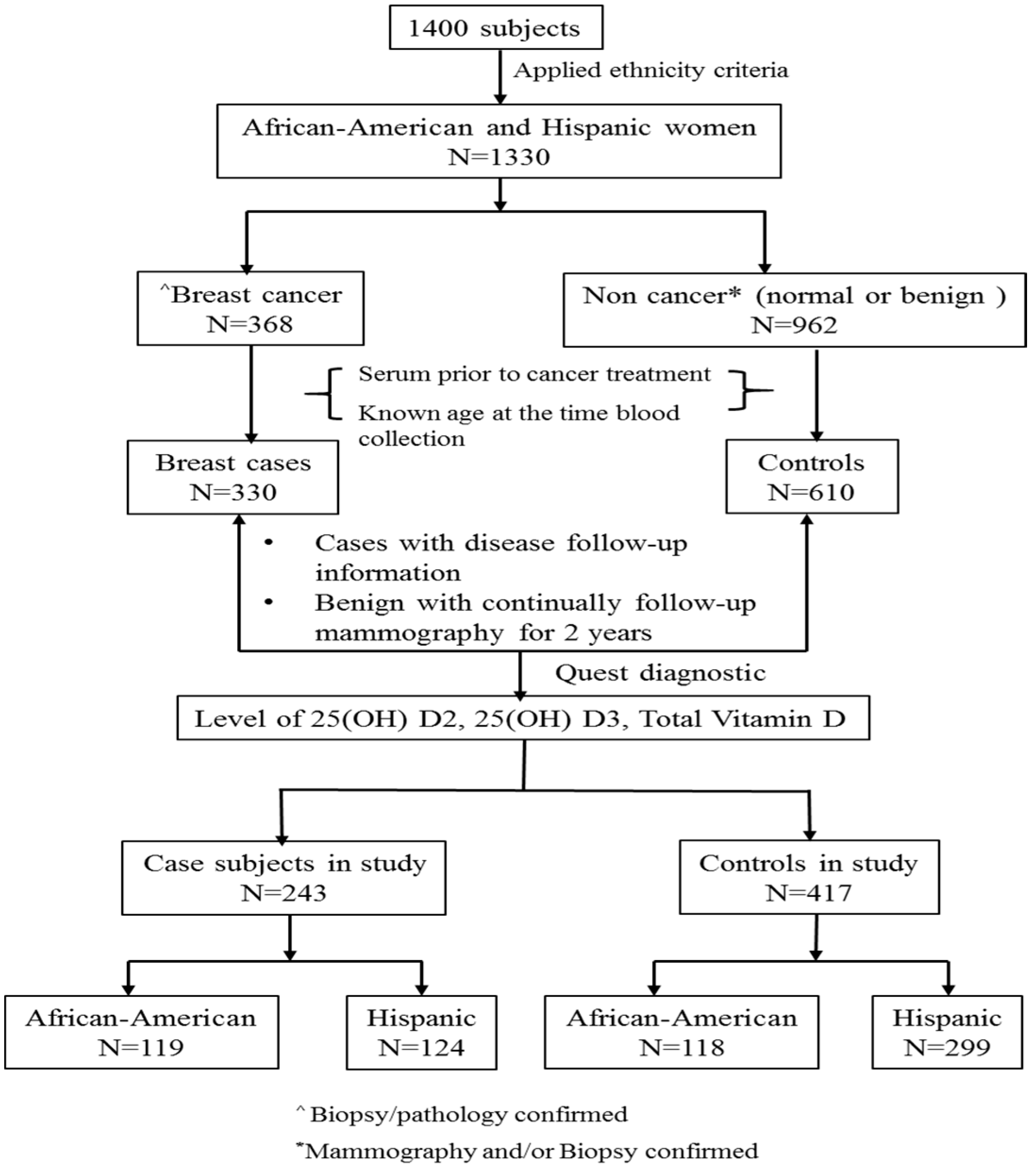