Desmoid Tumors in the Pediatric Population
Next Article in Special Issue

Radiation Therapy for the Treatment of Recurrent Glioblastoma: An Overview
Previous Article in Special Issue

Chromogranin A as Serum Marker for Gastroenteropancreatic Neuroendocrine Tumors: A Single Center Experience and Literature Review

The transcription factors Snail, Slug and Twist repress E-cadherin and induce epithelial-mesenchymal transition (EMT), a process exploited by invasive cancer cells. In this study, we evaluated the role of EMT in the tumorgenesis of neuroendocrine tumors of the pancreas (PNETs) in vitro, in vivo and human tumor specimen. Expression of EMT markers was analyzed using immunohistochemistry and real-time PCR. For in vitro studies, BON-1 cells were analyzed regarding expression of EMT markers before and after transfection with siRNA against Slug or Snail, and cell aggregation assays were performed. To asses in vivo effects, Rip1Tag2 mice were treated with vehicle or the snail-inhibitor polythlylenglykol from week 5-10 of age. The resected pancreata were evaluated by weight, tumor cell proliferation and apoptosis. Snail and Twist was expressed in 61 % and 64% of PNETs. This was associated with loss of E-cadherin. RT-PCR revealed conservation of the EMT markers Slug and Snail in BON-1 cells. Transfection with siRNA against Slug was associated with upregulation of E-cadherin, enhanced cell-cell adhesion and inhibition of cell proliferation. Snail-inhibition in vivo by PEG was associated with increased apoptosis, decreased tumor cell proliferation and dramatic reduced tumor volume in Rip1Tag2 mice. The presented data show that EMT plays a key role in tumorgenesis of PNETs. The activation of Snail in a considerable subset of human PNETs and the successful effect of Snail inhibition by PEG in islet cell tumors of transgenic mice provides first evidence of Snail as a drug target in PNETs. View Full-Text
Keywords: EMT; E-cadherin; snail; slug; twist; Rip1Tag2; PEG EMT; E-cadherin; snail; slug; twist; Rip1Tag2; PEG
►▼ Show Figures 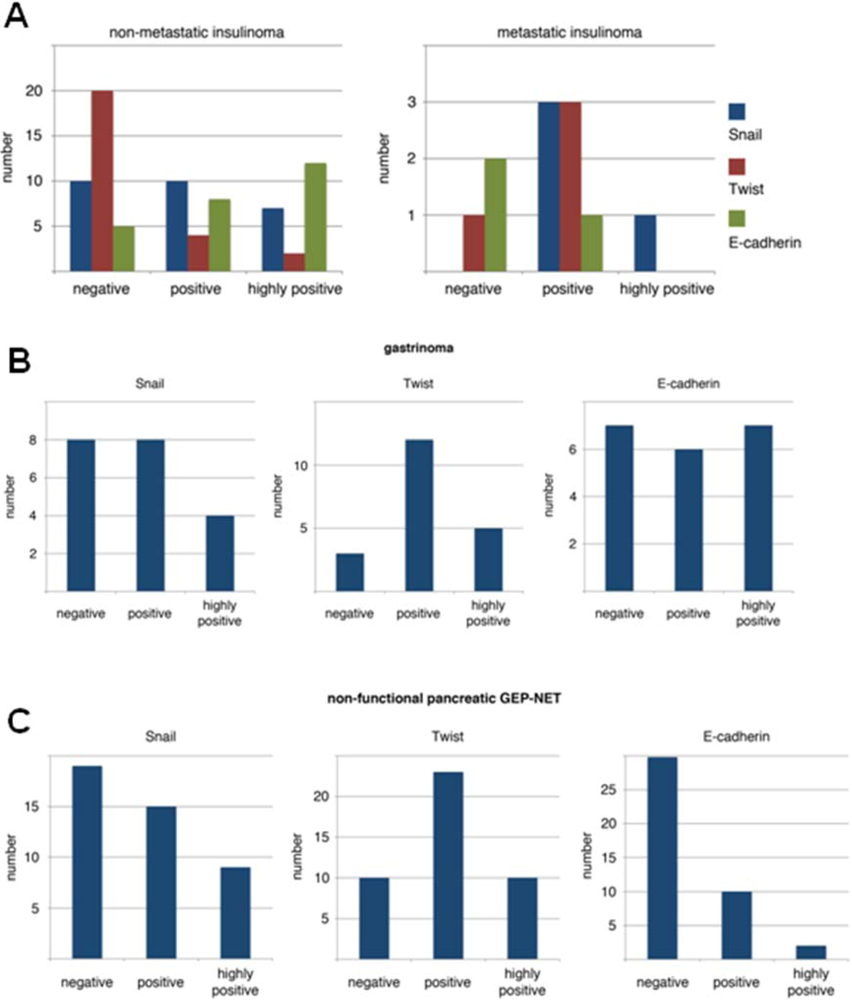