Thioredoxin and Cancer: A Role for Thioredoxin in all States of Tumor Oxygenation

Oxidative and Nitrosative Stress in the Metastatic Microenvironment

Metastases that are resistant to conventional therapies are the main cause of most cancer-related deaths in humans. Tumor cell heterogeneity, which associates with genomic and phenotypic instability, represents a major problem for cancer therapy. Additional factors, such as the attack of immune cells or organ-specific microenvironments, also influence metastatic cell behavior and the response to therapy. Interaction of cancer and endothelial cells in capillary beds, involving mechanical contact and transient adhesion, is a critical step in the initiation of metastasis. This interaction initiates a cascade of activation pathways that involves cytokines, growth factors, bioactive lipids and reactive oxygen and nitrogen species (ROS and RNS) produced by either the cancer cell or the endothelium. Vascular endothelium-derived NO and H2O2 are cytotoxic for the cancer cells, but also help to identify some critical molecular targets that appear essential for survival of invasive metastatic cell subsets. Surviving cancer cells that extravasate and start colonization of an organ or tissue can still be attacked by macrophages and be influenced by specific intraorgan microenvironment conditions. At all steps; from the primary tumor until colonization of a distant organ; metastatic cells undergo a dynamic process of constant adaptations that may lead to the survival of highly resistant malignant cell subsets. In this sequence of molecular events both ROS and RNS play key roles. View Full-Text
Keywords: metastases; tumor microenvironment; reactive oxygen species; reactive nitrogen species metastases; tumor microenvironment; reactive oxygen species; reactive nitrogen species
►▼ Show Figures 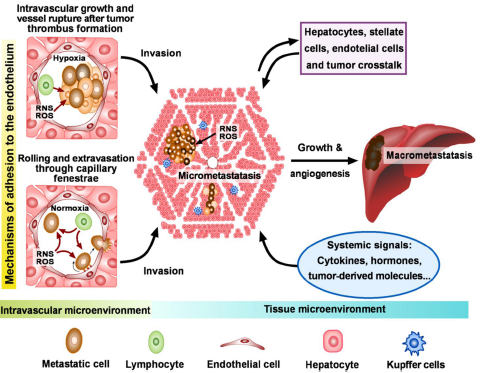