Evaluating the Feasibility and Acceptability of an Artificial-Intelligence-Enabled and Speech-Based Distress Screening Mobile App for Adolescents and Young Adults Diagnosed with Cancer: A Study Protocol
Previous Article in Journal

There is a growing focus on describing both negative and positive outcomes in the wake of childhood cancer. The purpose of this study was to describe and explore the relationships between posttraumatic stress symptoms (PTSS) and posttraumatic growth (PTG) among children living beyond cancer and one of their parents. As part of a larger online survey, 113 children (Mage at time of study = 15.82 (SD = 4.81); Mage at diagnosis = 5.86 (SD = 4.66)) and one of their parents completed questionnaires assessing PTSS and PTG. Descriptive statistics were used to describe the sample and levels of PTSS and PTG. Data were z-transformed and analyzed using bivariate correlations and t-tests. An actor–partner interdependence model (APIM) was used to test whether children’s and their parents’ PTSS was associated with their own PTG (actor effect) and the others’ PTG (partner effect). PTSS was low and PTG was moderate in this sample relative to scale ranges. There were no significant differences between the children’s and their parents’ PTSS (p = 0.535) or PTG (p = 0.534). Results from the APIM showed no significant actor effects (p = 0.185). A significant overall partner effect (p = 0.020) emerged. Lower PTSS for children was associated with greater PTG for their parents (b = −0.29, p = 0.018), but parent’s PTSS was not associated with children’s PTG (p = 0.434). This sample reported similar levels of PTSS and PTG to that which has been reported in the literature. Children and their parents’ scores on PTSS and PTG measures were not significantly different from one another. Children’s PTSS was negatively associated with their parents PTG, illuminating the ways in which PTSS and PTG may be related in the context of childhood cancer. Exploring family-based strategies to reduce PTSS and enhance PTG may be warranted, though further studies are required. View Full-Text
Keywords: pediatric cancer; childhood cancer survivor; survivorship; psychological health; APIM; parent-child; relationships pediatric cancer; childhood cancer survivor; survivorship; psychological health; APIM; parent-child; relationships
►▼ Show Figures 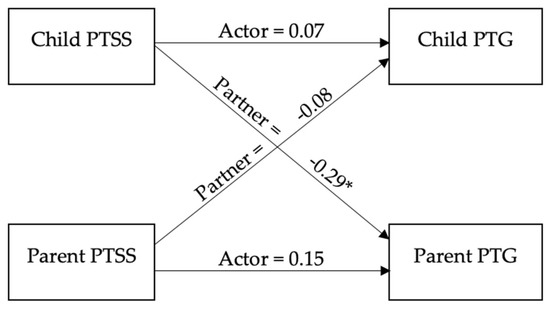