Targeting Cellular Components of the Tumor Microenvironment in Solid Malignancies

The tumor microenvironment comprises numerous different cellular players that engage transformed cancer cells and may exert pro- vs anti-tumor functions. Their crosstalk, functionality, as well as cell recruitment to cancer lesions, is chiefly dictated by cytokines/chemokines-receptor pairs and these axes can represent therapeutic vulnerabilities—as for immune checkpoint blockers. In this review, we recapitulate the main drivers of cellular TME dynamics, interactions, and functionality, mainly focusing on T lymphocytes, macrophages and cancer associated fibroblasts, also providing an outlook on state-of-the-art TME-targeting agents.

Cancers are composed of transformed cells, characterized by aberrant growth and invasiveness, in close relationship with non-transformed healthy cells and stromal tissue. The latter two comprise the so-called tumor microenvironment (TME), which plays a key role in tumorigenesis, cancer progression, metastatic seeding, and therapy resistance. In these regards, cancer-TME interactions are complex and dynamic, with malignant cells actively imposing an immune-suppressive and tumor-promoting state on surrounding, non-transformed, cells. Immune cells (both lymphoid and myeloid) can be recruited from the circulation and/or bone marrow by means of chemotactic signals, and their functionality is hijacked upon arrival at tumor sites. Molecular characterization of tumor-TME interactions led to the introduction of novel anti-cancer therapies targeting specific components of the TME, such as immune checkpoint blockers (ICB) (i.e., anti-programmed death 1, anti-PD1; anti-Cytotoxic T-Lymphocyte Antigen 4, anti-CTLA4). However, ICB resistance often develops and, despite the introduction of newer technologies able to study the TME at the single-cell level, a detailed understanding of all tumor-TME connections is still largely lacking. In this work, we highlight the main cellular and extracellular components of the TME, discuss their dynamics and functionality, and provide an outlook on the most relevant clinical data obtained with novel TME-targeting agents, with a focus on T lymphocytes, macrophages, and cancer-associated fibroblasts.
Keywords: cancer; immunity; microenvironment; immunotherapy cancer; immunity; microenvironment; immunotherapy

The tumor microenvironment (TME) is a complex and dynamic system comprising cellular and non-cellular components with a well-recognized role in the regulation of cancer progression, response to therapies, and development of acquired and adaptive resistance mechanisms. Cellular components of TME include cells such as T and B lymphocytes, tumor-associated macrophages (TAM), dendritic cells (DC), natural killer (NK) cells, neutrophils, myeloid-derived suppressor cells (MDSC), stromal cells such as cancer-associated fibroblast (CAF), pericytes, and mesenchymal stromal cells. Moreover, non-cellular components include the extracellular matrix (ECM), secreted molecules such as growth factors, cytokines, chemokines, extracellular vesicles, blood, and lymphatic cells. All these components play a critical role in the activation of signals that allow cancer cells to grow, invade the surrounding tissues, and metastasize to distant organs. Tumor cells metastasizing to distant tissues may meet a favorable microenvironment (pre-metastatic niche), which is positively conditioned by circulating factors released by the primary tumor [1,2]. Given the critical role of the TME in cancer development and progression other than in the regulation of the efficacy of anticancer therapies, many strategies targeting TME have been significantly expanded in the last years.
The topic of this review is to provide a comprehensive analysis of different cellular TME components in solid tumors, their dynamics, interactions, as well as of the different therapeutic strategies in clinical development, with a particular focus on T lymphocytes, macrophages, and cancer-associated fibroblasts.

The immune system consists of a range of components including different organs and immune cells. These cells include macrophages, DC, mast cells, NK, naïve, and memory B-lymphocytes, T-helper (Th) cells mainly classified into Th1, Th2, and Th17 cells, regulatory T cells (Treg), and CD8+ cytotoxic T lymphocytes (CTLs). Immune cells can be found in the tumor core, in the invasive margin, or in the adjacent lymphoid structure. The activation of the immune system against cancers is a complex process requiring the initiation of different steps starting from recognizing tumor cells’ antigens, to effector T cell activation through two signals [3]. Signal 1 is delivered through the T cell receptor (TCR), after engagement by a peptide-MHC complex displayed on APCs or cancer cells. Signal 2, a co-stimulatory signal, requires multiple ligand-receptor interactions that transmit both positive and negative signals to T cells.
CD8+ T cells are the most prominent anti-tumor effector cells. These cells, after interaction with APC, differentiate in CTLs, which directly kill cancer cells by releasing perforin and granzyme B [3]. In contrast, CD4+ Th1 cells regulate immune response against the tumor by producing pro-inflammatory cytokines namely interferon gamma (IFN-γ), tumor necrosis factor α (TNF-α), and interleukin 2 (IL-2), promoting not only the activation of CTLs but also the anti-tumor activity of macrophages, with enhanced antigen presentation [3].
In the TME, both inflammation and tumor cells’ antigen presentation can drive T cells towards an “exhausted” state that progressively loses effector function and proliferative capacity [4]. A major hallmark of T cell exhaustion is enhanced engagement of inhibitory signal by overexpression of multiple co-inhibitor checkpoint molecules such as programmed cell death receptor-1 (PD-1), cytotoxic T lymphocyte-associated protein 4 (CTLA-4), often co-expressed with other inhibitory receptors such as T-cell immunoglobulin and ITIM domain (TIGIT), or T-cell immunoglobulin-3 (TIM-3). These molecules interacting with their respective ligands, present on APC contribute to intratumoral T cell dysfunction [3]. Consequently, inhibition of these checkpoint proteins can rev up the immune response against tumors. In T cell exhaustion, a prominent role is also carried out by stromal cells as tumor-associated dendritic cells, Treg, TAM, and MDSC [1]. Treg cells are a subset of CD4+ T cells suppressing the function of T cell expression by up-regulation of co-inhibitory checkpoint molecules, by the generation of adenosine and production of cytokines such as IL-10 and Transforming Growth Factor beta (TGF-β) suppressing both maturation and expression of co-stimulatory factors on APC [5,6]. Additional soluble factors, growth factors, and chemokines can contribute to the immune escape mechanism by inhibiting maturation of DC, migration of T cells in the tumor bed other than CD8+ cells apoptosis giving evidence of the complexity and dynamism of TME and the need to understand these interactions to implement combined therapeutic strategies for cancer management [1].

The treatment of cancer has undoubtedly been changed with the introduction of monoclonal antibodies targeting the immune system. Since 2011, when ipilimumab was first approved for the treatment of metastatic melanoma, many other immunotherapeutic agents have been approved alone or in combination with chemotherapy (Figure 1), and currently, there are more than 2000 active clinical trials testing T cell modulators in cancer [7]. Apart from CTLA-4 and the PD-1/PD-L1, new checkpoint inhibitors have been discovered which can be targeted by specific monoclonal antibodies (mAb). These drugs are under investigation in clinical trials as monotherapy or in combination with other agents and will also be the topic of our discussion.

Solid tumors are constituted by several different cellular and extracellular components, known as the Tumor Microenvironment (TME). The relationship established between cancer cells and the healthy surrounding TME often dictates the natural fate of cancer lesions, from tumor eradication to overt tumor progression, immune evasion, and/or therapy resistance. Malignant tumors typically hijack the healthy, non-tumoral, TME, which in turn has been recognized as a key therapeutic target at multiple levels. Immune cells, such as T lymphocytes and myeloid cells, as well as stromal cells and extracellular matrix components, are crucial recognized components of the TME. By dissecting the functional states and molecular players at the base of TME derailment, numerous therapeutic targets have been elucidated and some have reached clinical approval in several solid tumors, such as immune checkpoint blockers (ICB) (Figure 2). Moreover, ICB, in the form of anti-PD1/anti-PDL1, has also been approved in the early, neo-adjuvant, setting in TNBC [146] as well as NSCLC [147]. Clinical research is nowadays moving towards the identification of the ideal clinical settings as well as combinatorial partners to combine ICB with, in order to promote durable anti-cancer responses. Notwithstanding this, tumor relapse or therapy refractoriness remain a major issue in oncology upon TME-targeting agents, especially upon myeloid-targeting. In particular, a major hurdle limiting the clinical efficacy of macrophage-depleting strategies is represented by their remarkable functional heterogeneity, which in turn dictates differential roles of these cells according to specific organs/tumors, or within a single tumor lesion. In addition to this, species-specific differences have been demonstrated among murine and human macrophages, further explaining the meager clinical trial results obtained so far despite promising pre-clinical attempts [148]. Concurrently, on the one hand, myeloid-depleting strategies have so far found a role in TGCT with paxidartinib, on the other hand, myeloid-reprogramming strategies are currently also being explored to promote long-lasting and effective anti-tumor immune responses (NCT03866109) [149,150], or to provide novel effector functions, such as for chimeric antigen receptors-macrophages (NCT04660929) [151]. Ultimately, CAF targeting is still a largely unexplored area of clinical investigation, due to its great heterogeneity, less characterized functional adaptations, and the scarcity of specific, druggable, targets.

The medical treatment of solid tumors has vastly changed in the past decades from the sole use of chemotherapeutic agents to the introduction of both more specifically targeted and immune therapies. Concerning immune therapies, the most pronounced clinical benefits have been observed with immune checkpoint blockers (anti-PD1/PDL1, anti-CTLA4 mAb), despite multiple cellular players comprising the TME and aiding in tumor progression and therapy resistance. In this scenario, the identification of novel druggable TME vulnerabilities, mainly focusing on T lymphocytes, macrophages, and CAFs, have been elucidated and are currently in clinical testing. Information deriving from ongoing clinical trials will possibly expand the therapeutic armamentarium targeting the TME, apart from ICBs, and/or provide novel combinatorial strategies. In addition, novel technologies able to study cancer lesions and their TME at single-cell resolution are nowadays available, allowing to match DNA-, RNA- and/or protein-based approaches. In addition, in vitro 3D modeling of TME has been shown to mimic in vivo drug delivery, deepen the diverse functionalities of CAFs [152,153] and macrophages [154], and represent a valuable tool for drug screening [155,156]. Overall, the identification of novel molecular drivers of cancer progression and TME derangement will set the bases for newer therapeutic targets. 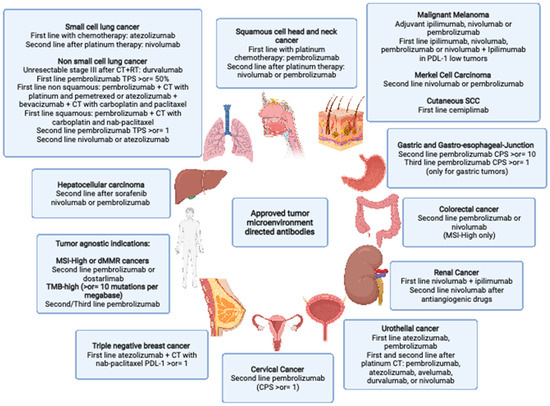 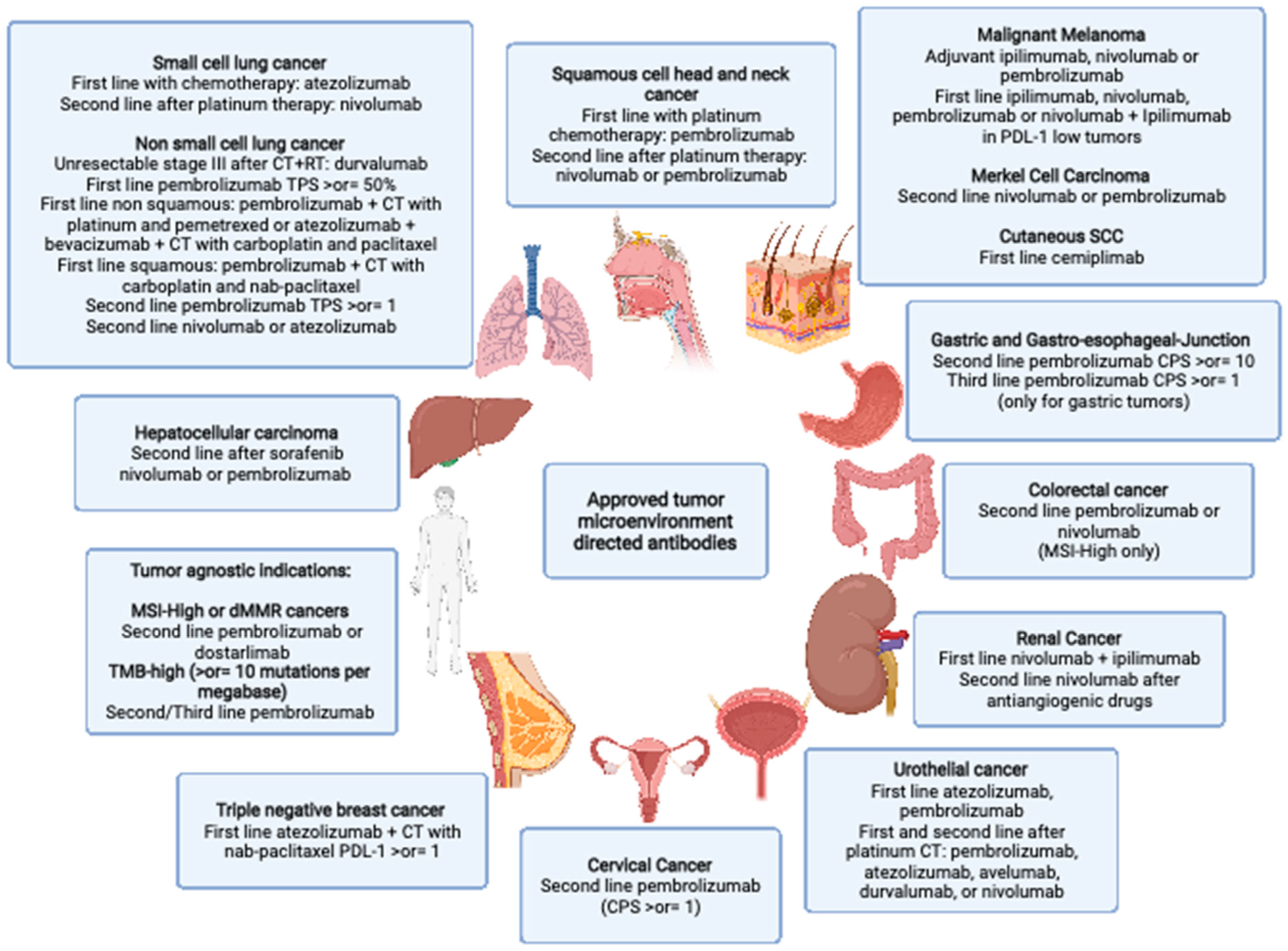