Hepatoid adenocarcinoma of the stomach (HAS) is a subset of gastric cancer (GC) histologically characterized by hepatocellular carcinoma-like foci with or without alpha-fetoprotein secretion, which is easily misdiagnosed. Genomic alterations and potential targets for this population are still largely unknown. Additionally, treatment regimens of HAS are mainly based on GC guidelines, which is not reasonable for diseases with great heterogeneity. The present study comprehensively depicts the genomic features of HAS, and they are significantly different from GC, AFP-producing GC (AFPGC), and liver hepatocellular carcinoma (LIHC). Multiple aggressive behavior-related amplificated or deleted regions in HAS are firstly reported. Moreover, reliable and practicable clinically actionable alterations for HAS are identified, providing evidence for making personalized therapy based on the genomic characteristics of HAS instead of GC.

Hepatoid adenocarcinoma of the stomach (HAS) is a rare malignancy with aggressive biological behavior. This study aimed to compare the genetic landscape of HAS with liver hepatocellular carcinoma (LIHC), gastric cancer (GC), and AFP-producing GC (AFPGC) and identify clinically actionable alterations. Thirty-eight cases of HAS were collected for whole-exome sequencing. Significantly mutated genes were identified. TP53 was the most frequently mutated gene (66%). Hypoxia, TNF-α/NFκB, mitotic spindle assembly, DNA repair, and p53 signaling pathways mutated frequently. Mutagenesis mechanisms in HAS were associated with spontaneous or enzymatic deamination of 5-methylcytosine to thymine and defective homologous recombination-related DNA damage repair. However, LIHC was characteristic of exposure to aflatoxin and aristolochic acid. The copy number variants (CNVs) in HAS was significantly different compared to LIHC, GC, and AFPGC. Aggressive behavior-related CNVs were identified, including local vascular invasion, advanced stages, and adverse prognosis. In 55.26% of HAS patients there existed at least one clinically actionable alteration, including ERBB2, FGFR1, CDK4, EGFR, MET, and MDM2 amplifications and BRCA1/2 mutations. MDM2 amplification with functional TP53 was detected in 5% of HAS patients, which was proved sensitive to MDM2 inhibitors. A total of 10.53% of HAS patients harbored TMB > 10 muts/Mb. These findings improve our understanding of the genomic features of HAS and provide potential therapeutic targets. View Full-Text
Keywords: hepatoid adenocarcinoma of the stomach; whole-exome sequencing; mutagenesis mechanisms; aggressive behaviors; clinically actionable alterations hepatoid adenocarcinoma of the stomach; whole-exome sequencing; mutagenesis mechanisms; aggressive behaviors; clinically actionable alterations
►▼ Show Figures 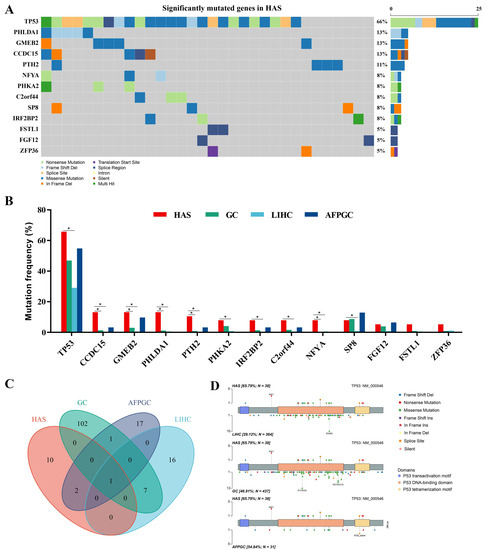