Conventional Therapeutics in BPDCN Patients—Do They Still Have a Place in the Era of Targeted Therapies?
Previous Article in Journal / Special Issue

Metastasis-directed therapy (MDT) for oligometastatic disease has gained increasing support for different entities recently [1,2,3]. For prostate cancer, stereotactic ablative radiotherapy (SABR) has been proven to be efficient in controlling oligometastatic disease, and it has resulted in an increased progression-free survival and androgen deprivation therapy (ADT)-free survival in the ORIOLE and STOMP trials, respectively [4,5].
To identify patients with oligometastasis who would benefit from localized therapy, advanced molecular imaging methods are crucial [6]. Although the first MDT trials in prostate cancer utilized choline positron emission tomography (PET), prostate-specific membrane antigen (PSMA) PET represents the current gold standard for detecting metastatic disease [4,7]. PSMA PET allows the detection of small lymph node metastases even in men with early prostate-specific antigen (PSA) value progression (≤0.5 ng/mL), resulting in improved patient selection and the early diagnosis of nodal oligorecurrent prostate cancer [8,9].
Although the first trials showed promising data for MDT in oligometastatic prostate cancer, no consensus regarding the optimal treatment regime for nodal oligorecurrent prostate cancer yet exists [4,5,10,11,12]. Albeit offering high local control, SABR suffers from nodal out-of-field recurrences, which was highlighted by a multicenter analysis by De Bleser et al. [13]. In their analysis of 506 patients, three-year metastasis-free survival was worse with SABR than with elective salvage nodal radiotherapy (SNRT) with 68% versus 77%, respectively [13]. The Prostate Cancer Expert Panel of the German Society of Radiation Oncology (DEGRO), therefore, preferentially recommended elective salvage nodal radiotherapy with simultaneous integrated boost (SIB) to involved lymph nodes for pelvic nodal oligorecurrent prostate cancer [14].
The multimodal treatment strategy for castration-sensitive metastatic prostate cancer involves the initiation of ADT according to current guidelines [15]. In the context of SNRT, ADT may be delayed to avoid ADT-related side effects [4]. The data from randomized trials, which evaluate the combination of ADT and SNRT, are not available yet. Therefore, in this current analysis, we investigated the long-term outcome and toxicity of salvage radiotherapy with or without ADT for nodal oligorecurrent prostate cancer with PET-guided SIB to involved lymph nodes (LN).

This retrospective single-center analysis is based on 95 consecutive patients treated between 2010 and 2021 with SNRT for (oligo)recurrent prostate cancer after initial resection and/or radiotherapy. All patients had histologically proven prostate cancer. Stratification was conducted according to the risk group classification of D’Amico et al. [16]. PET imaging before SNRT was conducted with 68Ga-labeled PSMA PET in 45 cases (47.4%), and with 18F-PSMA-1007 PET in 22 cases (23.2%). A total of 23 patients (24.2%) received 18F-Fluoromethylcholine PET, 4 patients (4.2%) received 11C-Choline PET, and one patient (1.1%) received conventional imaging as the pre-treatment staging method.
SNRT was delivered by intensity-modulated radiation therapy (IMRT) or volumetric modulated arc therapy (VMAT) with SIB to recurrent PET-positive LN. Concomitant ADT was prescribed at the discretion of the treating urologist and was recommended for patients with an intermediate-risk (for 6 months) and a high-risk disease (for 24–36 months). A total of 79 (83.2%) patients received SNRT without irradiation of the prostatic fossa. Cone-beam computed tomography-guided SNRT was moderately hypofractionated with five fractions per week. Two dose levels were applied in the SIB technique: The prescribed median PTV dose (D95%) was 47.6 Gy (interquartile range (IQR) 45.9–49.3 Gy) in 28 fractions (IQR 27–28 fractions) of 1.7 Gy per fraction (IQR 1.7–1.8 Gy). The prescribed median total PTVBoost dose (Dmean) to recurrent lymph nodes was 60.2 Gy (IQR 58.8–63.0 Gy) with a median dose per fraction of 2.2 Gy (IQR 2.1–2.2 Gy). Prophylactic irradiation of the prostatic fossa without signs of recurrence in PET imaging was conducted in 16 (16.8%) cases. The prescribed median total dose to the prostatic fossa was 69.3 Gy (IQR 57.6–69.3 Gy) with a median dose per fraction of 2.1 Gy (IQR 2.1–2.1 Gy) in 33 fractions (IQR 29–33 fractions). Target volume delineation was based on the Radiation Therapy Oncology Group (RTOG) atlas for salvage prostate cancer and was adjusted at the discretion of the treating radiation oncologist, especially for extrapelvic disease. In 65 (68.4%) cases the pelvic, in 18 (18.9%) cases the extrapelvic, and in 12 (12.6%) cases the pelvic plus, extrapelvic LN were treated. Pinnacle3 (Philips Radiation Oncology Systems, Fitchburg, WI, USA) was used for treatment planning. Figure 1 illustrates an exemplary dose distribution.
Biochemical progression was the primary endpoint of this retrospective study and was defined as nadir plus a ≥ 0.5 ng/mL increase in the PSA value in accordance with the GETUG AFU 16 trial definition [17]. Secondary endpoints were metastatic disease progression, overall mortality, and the five-year cumulative incidence of gastrointestinal and genitourinary toxicity. Metastastic disease progression was defined as the occurrence of distant metastasis, diagnosed by follow-up imaging. The occurrence of death from any cause was defined as overall mortality. The follow-up was defined as the time period between the start of radiotherapy and the date of the last follow-up. Physician-recorded toxicity was assessed at baseline, at the end of radiotherapy, six weeks after radiotherapy, and then every six months. Follow-up was changed to annual examinations after the first two years of follow-up. Gastrointestinal (GI) and genitourinary (GU) side effects were assessed utilizing Common Terminology Criteria for Adverse Events (CTCAE) v5.0 [18]. Side effects, which occurred between the start of SNRT and three months after SNRT, were counted as acute toxicity, whereas all later follow-ups were included in the late toxicity assessment.
Cumulative incidence functions (CIFs) with the start of radiation therapy set as the baseline time were used to generate five-year outcome estimates. CIFs were used for biochemical and metastatic disease progression with death as the competing risk (R-package cmprsk). For overall mortality, no competing risk was assumed. Gray´s tests were used to compare cumulative incidence estimates. The impact of clinico-pathological parameters on biochemical and metastatic disease progression was assessed by uni- and multivariate Fine–Gray competing-risk regression analyses, considering as covariates extrapelvic lymph nodes (no/yes), number of lymph nodes ≥ 4 (no/yes), PSMA PET (no/yes), age at start of radiotherapy (continuous), Gleason score ≥ 8 (no/yes), concomitant ADT (no/yes), and PSA value at the start of radiotherapy (continuous). The Fine–Gray models were fit to estimate the incidence of outcomes over time in the presence of competing risks (finegray, R-package survival). The Fine–Gray model fits were generated by fitting a weighted Cox model on the constructed Fine–Gray data set, as described by Therneau et al. [19]. The best fitting weighted Cox model was selected by measuring the relative goodness-of-fit with the Akaike information criterion (AIC) (stepAIC, R-package MASS), which selected a combination of patient ages at the start of radiotherapy, concomitant ADT, and PSA value at the start of radiotherapy as the best predictors for biochemical progression. The covariates number of lymph nodes ≥ 4, PSMA PET, concomitant ADT, and PSA value at the start of radiotherapy were selected as the best predictors for metastatic disease progression. The model fits were assessed by comparing the results of the likelihood ratio tests. The proportional hazard assumption was tested by analyzing the Schoenfeld residuals (cox.zph, R-package survival). For all statistical analyses, R version 4.2.0 (The R Foundation, Vienna, Austria) was utilized. All tests were two-sided with statistical significance indicated by p < 0.05.

This publication was supported by the Open Access Publication Fund of the University of Wuerzburg.

Ethical review and approval were waived for this study by the Ethics Committee of the University of Wuerzburg due to the retrospective nature of the study and all the procedures being performed were part of the routine care.

Informed consent for retrospective data analysis was obtained from all subjects involved in the study. 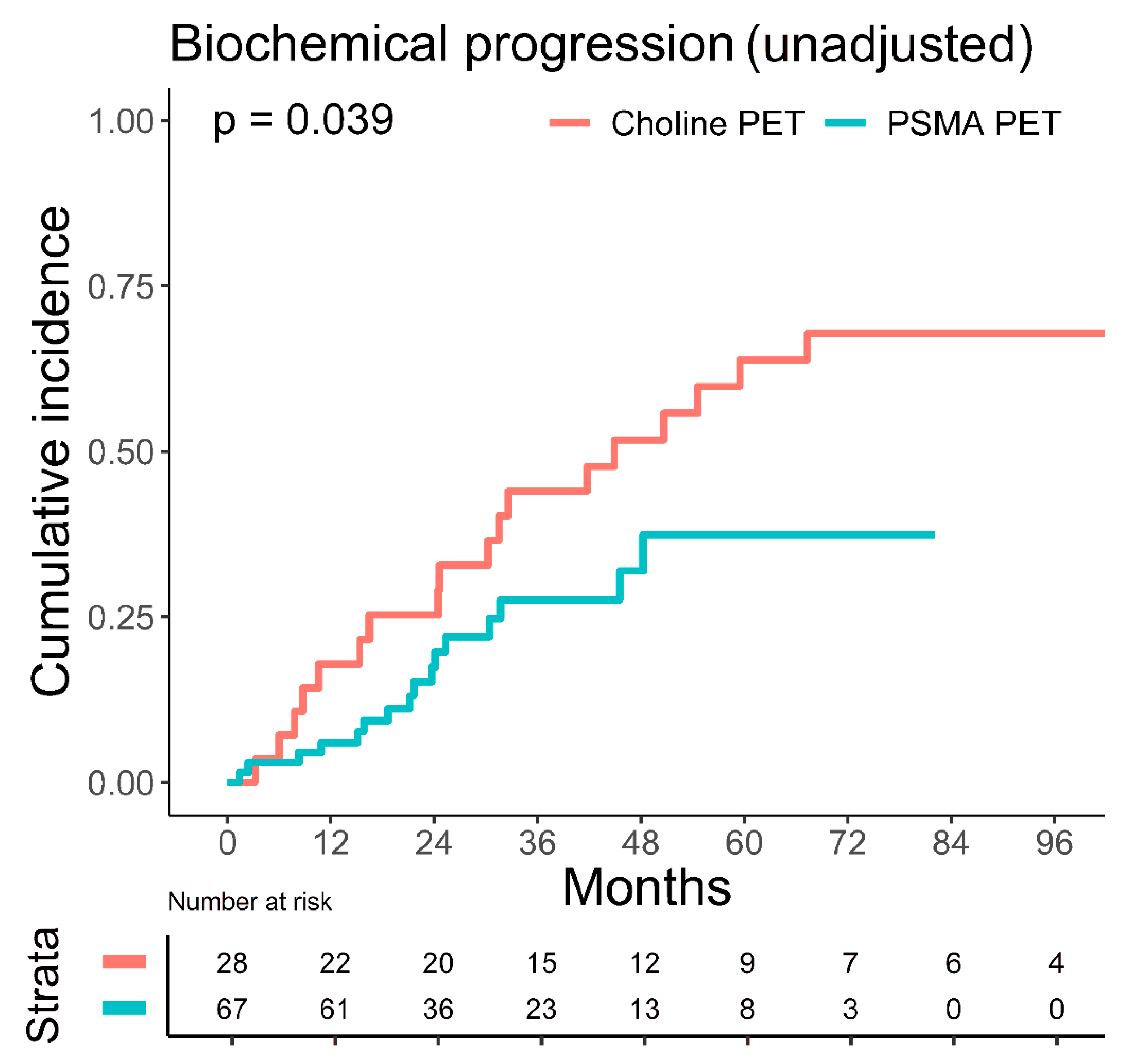