The Role of Extracellular Vesicles in Melanoma Progression

UK ethnic minorities have poorer outcomes of some cancers and are less likely to report positive health care experiences. We wanted to determine whether these differences are related to inequalities in time to diagnosis once patients sought medical help with cancer symptoms. We found that in five of the seven cancers studied, the minority groups experienced a longer time to diagnosis when compared with the White group. However, the differences were small and unlikely to be the sole explanation for the ethnic variation in cancer outcomes. Nonetheless, addressing such differences will help to improve trust and care experiences among ethnic minority groups.

Background: This study investigated ethnic differences in diagnostic interval (DI)—the period between initial primary care presentation and diagnosis. Methods: We analysed the primary care-linked data of patients who reported features of seven cancers (breast, lung, prostate, colorectal, oesophagogastric, myeloma, and ovarian) one year before diagnosis. Accelerated failure time (AFT) models investigated the association between DI and ethnicity, adjusting for age, sex, deprivation, and morbidity. Results: Of 126,627 eligible participants, 92.1% were White, 1.99% Black, 1.71% Asian, 1.83% Mixed, and 2.36% were of Other ethnic backgrounds. Considering all cancer sites combined, the median (interquartile range) DI was 55 (20–175) days, longest in lung [127, (42–265) days], and shortest in breast cancer [13 (13, 8–18) days]. DI for the Black and Asian groups was 10% (AFT ratio, 95%CI 1.10, 1.05–1.14) and 16% (1.16, 1.10–1.22), respectively, longer than for the White group. Site-specific analyses revealed evidence of longer DI in Asian and Black patients with prostate, colorectal, and oesophagogastric cancer, plus Black patients with breast cancer and myeloma, and the Mixed group with lung cancer compared with White patients. DI was shorter for the Other group with lung, prostate, myeloma, and oesophagogastric cancer than the White group. Conclusion: We found limited and inconsistent evidence of ethnic differences in DI among patients who reported cancer features in primary care before diagnosis. Our findings suggest that inequalities in diagnostic intervals, where present, are unlikely to be the sole explanation for ethnic variations in cancer outcomes. View Full-Text
Keywords: primary care; diagnostic interval; ethnic inequalities; early detection; diagnostic pathway; symptomatic cancer primary care; diagnostic interval; ethnic inequalities; early detection; diagnostic pathway; symptomatic cancer
►▼ Show Figures 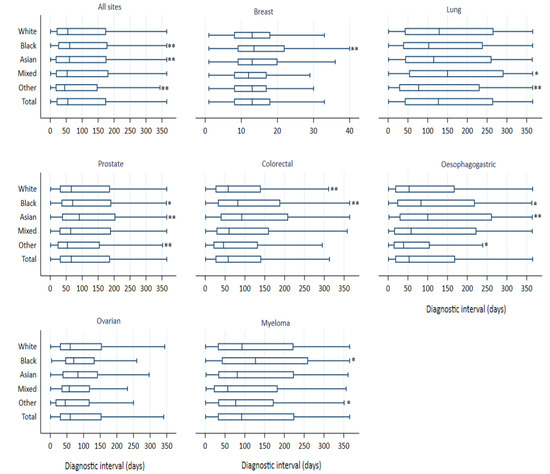