More Than Meets the Eye: Scientific Rationale behind Molecular Imaging and Therapeutic Targeting of Prostate-Specific Membrane Antigen (PSMA) in Metastatic Prostate Cancer and Beyond
Previous Article in Journal

Patients with malignant melanoma have an increased risk of being affected by kidney cancer and vice versa. Lifestyle risk factors contributing to these cancers differ. Instead, our study aims to assess whether common genetic predispositions may be at play. Here we reveal the clinical and germline genetic characteristics of a series of 125 patients diagnosed with both malignant melanoma and renal cell carcinoma (RCC), the most common type of kidney cancer. Clinical testing of known predisposing genes only explains a minority of either or both cancer occurrences. Instead, a wide exploration of all coding genes identified 13 novel susceptibility candidates more prone to rare deleterious germline mutations than expected in cancer-free controls, and converging to a common signaling pathway. This research highlights methods to better characterize cancer (co-)heritability. It also provides a basis to better understand and diagnose melanoma and RCC, which is essential for adequate clinical management. 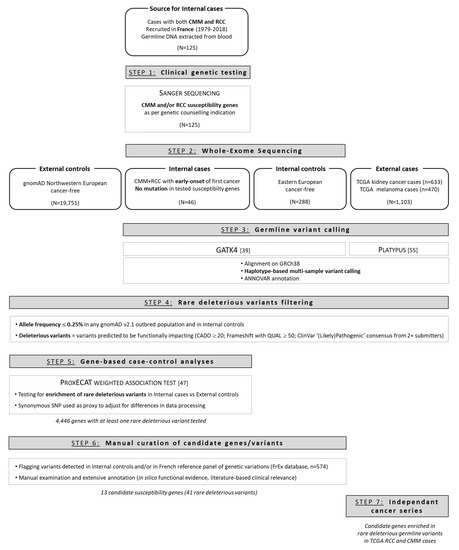