A Circulating Exosome RNA Signature Is a Potential Diagnostic Marker for Pancreatic Cancer, a Systematic Study
Previous Article in Journal

Synovial sarcoma (SS) is associated with a high risk of recurrence and poor prognosis, and no biomarker useful in monitoring tumor burden exists. We identified monocarboxylate transporter 1 (MCT1) expressed in extracellular vesicles (EVs) derived from synovial sarcoma as a potential such marker. Circulating levels of MCT1+CD9+ EVs were significantly correlated with tumor volume in a SS mouse model. Serum levels of MCT1+CD9+ EVs reflected tumor burden and treatment response in SS patients. Patients with MCT1 expression on the plasma membrane have significantly worse overall survival than those with nuclear expression. Silencing of MCT1 reduced the malignant phenotype including cellular viability, migration, and invasion of SS cells. MCT1 may thus be a promising novel target for liquid biopsies and a novel therapeutic target. 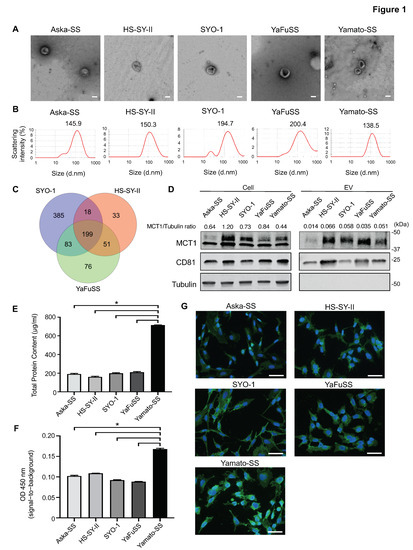