This retrospective, single-center, comparative study included patients who underwent EUS for further examination of pancreaticobiliary disease at the Department of Gastroenterology, Osaka City University Hospital, between January 2017 and December 2018. EUS was performed to either confirm pancreaticobiliary disease suspected by another modality (CT, MRI, US, and so on) or during a follow-up examination. We excluded patients who had received post-gastrointestinal surgery, because these cases are different from normal situations, and the EUS images are difficult to evaluate due to the effect of the surgery. We also excluded patients in whom EUS was aborted due to sedation failure and adverse events.

We checked the electronic medical records of the patients for their age, sex, symptoms, drinking habit, smoking habit, history of diabetes mellitus, MRI test within six months, CT test within six months, part of the main lesion (such as tumor and/or the cyst, which must be observed carefully), type of scope, early chronic pancreatitis, chronic pancreatitis, indirect findings (caliber change, retention cysts, dilatation of the branch duct with slightly low echoic lesion), part of the indirect findings, endoscopists, and final diagnosis.

We defined the indirect findings as follows: caliber change, retention cyst, and dilatation of the branch duct with a slightly low echoic lesion (Figure 1) [16,17,18].
We did not include typical pancreatic cancer findings and clear space-occupying lesions that could be diagnosed by EUS as indirect findings.

According to the package insert, the resolution of the two echoendoscopes was the same when connected to the UE-ME1: an axial resolution of <1 mm and lateral resolution of <3 mm by incorporating relatively low-frequency transmission (5–7.5 MHz). Furthermore, there was no difference between the two scopes in terms of visibility as we observed the same thread in water using GF-UCT260 and GF-UE260-AL5 (Figure 2c,d).

Continuous variables are presented as medians and were analyzed using the Fisher’s test, while categorical variables are presented as numbers and were analyzed using the χ2 test. The model included age, sex, symptoms, drinking habit, smoking habit, history of diabetes, MRI test in six months, CT test in six months, part of the main lesion, type of scope, early chronic pancreatitis, chronic pancreatitis, indirect findings, and endoscopists. For each factor, we calculated the odds ratio (OR) with a 95% confidence interval (CI). There were no definite factors associated with the detection rate of indirect findings. Previous imaging tests provided information such as caliber changes, retention cysts, and dilatation of the branch duct. Since the CT and MRI might cause information bias in the detection rate of indirect findings, we adjusted them using multivariate analysis.
Kappa coefficients were calculated to assess the inter- and intra-observer agreement of indirect findings. A κ-value of less than 0.50 was regarded as poor agreement, between 0.5 and 0.75 as moderate, between 0.75 and 0.90 as good, and more than 0.90 as excellent agreement [19].
Further, we created a pseudo-population using the inverse probability of treatment weighting (IPTW) method, which is based on propensity scores, and reduced selection bias without reducing the sample size. The IPTW was calculated as the inverse of the conditional probability [20,21]. We evaluated the reliability of the model by using the Hosmer–Lemeshow test for goodness-of-fit statistical analysis.
All statistical analyses were performed using SPSSTM software (Version 26.0, SPSS Inc., Tokyo, Japan) for Windows and the RTM statistical package. All statistical tests were two-sided, and differences were considered statistically significant when p-values were <0.05.

We enrolled 322 patients who underwent EUS. Six patients were excluded because of a poor study (three underwent poor sedation, two were post-pancreatectomy, and one had a perforation). We finally included 316 patients (Figure 3). Table 1 shows the clinical characteristics of the patients. The patients were divided into two groups: 185 patients in the radial-arrayed echoendoscope group and 131 patients in the convex-arrayed echoendoscope group. Twenty-five patients with typical pancreatic cancer and eight with intraductal papillary mucinous carcinoma (IPMC), who did not have indirect findings, were included in this model. Almost all patients underwent CT and/or MRI examinations in the six months prior to enrollment; however, images were unavailable for 27 patients (8.5%). Some of these 27 patients were referred from another hospital, and we were unable to refer to their images because they did not bring a compact disk recordable with the images to our hospital.

3.2.1. The Detection Rate for Indirect Findings

We created a quasi-randomized study using IPTW. Subjects were randomly assigned to each group so that the background characteristics were likely similar between the radial-arrayed and convex-arrayed groups. The Hosmer–Lemeshow test revealed that the propensity-weighted model was well-calibrated (p = 0.32).

The study was conducted according to the ethical guidelines for clinical studies, considering the patients’ human rights and privacy. The protocol of this study was approved by the Ethics Committee of the Osaka City University Graduate School of Medicine (No. 4401) on 9 October 2019.

All patients provided informed consent for the use of personal data. In addition, we provided all patients with the opportunity to opt for this study on our website’s home page.

The data presented in this study are available on request from the corresponding author. The data are not publicly available due to privacy issues. 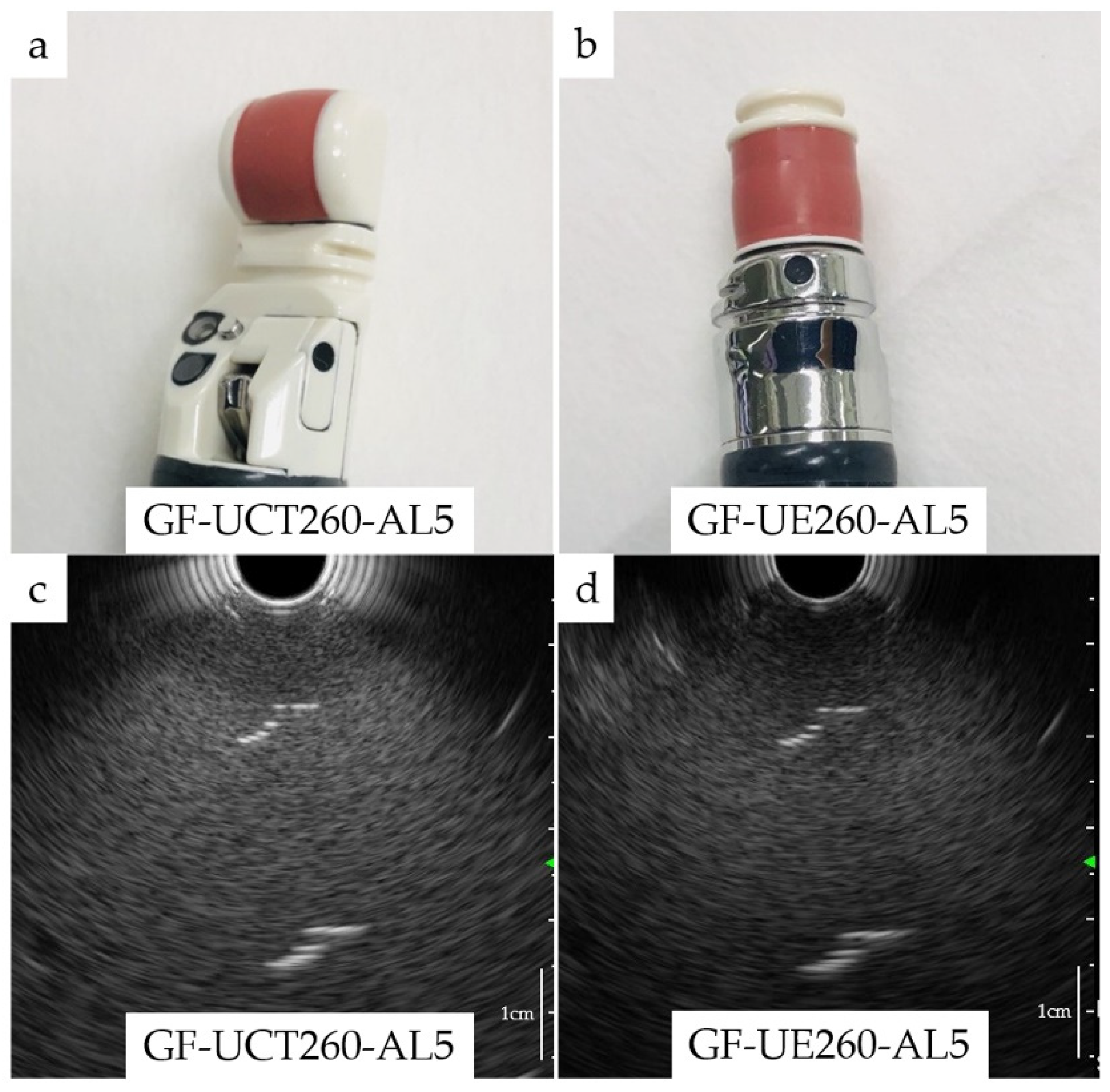