Neuroendocrine neoplasms (NEN) are rare tumours, and currently available, mono-analyte biomarkers for diagnosis and prognosis have poor predictive and prognostic accuracy. Metabolic profiling has been applied to several cancer types, but the systemic metabolic consequences of NEN have not yet been well studied. Here, we demonstrate, in a treatment-naïve cohort of patients with NEN, that several metabolites are dysregulated in NEN and this is detectable in urine, due to changes in cancer metabolic processes, neuroendocrine signalling molecules and the gut mirobiome. This may have relevance for novel diagnostic biomarkers.

The incidence of neuroendocrine neoplasms (NEN) is increasing, but established biomarkers have poor diagnostic and prognostic accuracy. Here, we aim to define the systemic metabolic consequences of NEN and to establish the diagnostic utility of proton nuclear magnetic resonance spectroscopy (1H-NMR) for NEN in a prospective cohort of patients through a single-centre, prospective controlled observational study. Urine samples of 34 treatment-naïve NEN patients (median age: 59.3 years, range: 36–85): 18 had pancreatic (Pan) NEN, of which seven were functioning; 16 had small bowel (SB) NEN; 20 age- and sex-matched healthy control individuals were analysed using a 600 MHz Bruker 1H-NMR spectrometer. Orthogonal partial-least-squares-discriminant analysis models were able to discriminate both PanNEN and SBNEN patients from healthy control (Healthy vs. PanNEN: AUC = 0.90, Healthy vs. SBNEN: AUC = 0.90). Secondary metabolites of tryptophan, such as trigonelline and a niacin-related metabolite were also identified to be universally decreased in NEN patients, while upstream metabolites, such as kynurenine, were elevated in SBNEN. Hippurate, a gut-derived metabolite, was reduced in all patients, whereas other gut microbial co-metabolites, trimethylamine-N-oxide, 4-hydroxyphenylacetate and phenylacetylglutamine, were elevated in those with SBNEN. These findings suggest the existence of a new systems-based neuroendocrine circuit, regulated in part by cancer metabolism, neuroendocrine signalling molecules and gut microbial co-metabolism. Metabonomic profiling of NEN has diagnostic potential and could be used for discovering biomarkers for these tumours. These preliminary data require confirmation in a larger cohort. View Full-Text
Keywords: neuroendocrine neoplasms; neuroendocrine tumours; biomarkers; nuclear magnetic resonance; metabolic profiling; metabonomics; precision medicine neuroendocrine neoplasms; neuroendocrine tumours; biomarkers; nuclear magnetic resonance; metabolic profiling; metabonomics; precision medicine
►▼ Show Figures 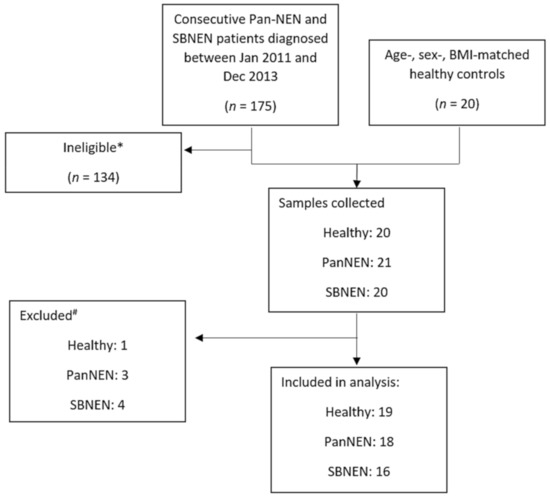