The Value of Platelet-to-Lymphocyte Ratio as a Prognostic Marker in Cholangiocarcinoma: A Systematic Review and Meta-Analysis
Previous Article in Journal

Stereotactic Body Radiation Therapy after Chemotherapy for Unresectable Perihilar Cholangiocarcinoma: The STRONG Trial, a Phase I Safety and Feasibility Study

Actual 10-Year Survival after Resection of Perihilar Cholangiocarcinoma: What Factors Preclude a Chance for Cure?

Long-term survival for patients with perihilar cholangiocarcinoma (pCCA) is rare. The median overall survival of patients undergoing curative-intent surgery for pCCA is 19 to 39 months. This multicenter study aimed to determine the cure rate and to identify clinicopathological factors that may preclude cure. Four hundred and sixty patients were included with a median follow-up of 10 years. Median OS was 29.9 months. Twenty-nine (6%) patients reached 10-year OS. The observed cure rate was 5%. Factors that virtually precluded cure (i.e., below 1%) according to the mixture cure model included age above 70, Bismuth–Corlette type IV tumors, hepatic artery reconstruction, and positive resection margins. Cure was unlikely (i.e., below 3%) in patients with positive lymph nodes or poor tumor differentiation. These factors need to be considered in patient counseling and long-term follow-up after surgery.

Complete resection of perihilar cholangiocarcinoma (pCCA) is the only potentially curative treatment. Long-term survival data is rare and prognostic analyses are hindered by the rarity of the disease. This study aimed to determine the cure rate and to identify clinicopathological factors that may preclude cure. All consecutive resections for pathologically confirmed pCCA between 2000 and 2009 in 22 centers worldwide were included in a retrospective cohort study. Each center included its retrospective data series. A total of 460 patients were included with a median follow-up of 10 years for patients alive at last follow-up. Median overall survival (OS) was 29.9 months and 10-year OS was 12.8%. Twenty-nine (6%) patients reached 10-year OS. The observed cure rate was 5%. Factors that virtually precluded cure (i.e., below 1%) according to the mixture cure model included age above 70, Bismuth-Corlette type IV tumors, hepatic artery reconstruction, and positive resection margins. Cure was unlikely (i.e., below 3%) in patients with positive lymph nodes or poor tumor differentiation. These factors need to be considered in patient counseling and long-term follow-up after surgery.
Keywords:
perihilar cholangiocarcinoma; Klatskin tumor; surgery; survival; prognosis; cure

Perihilar cholangiocarcinoma (pCCA) is a rare malignancy that manifests at or near the biliary confluence and accounts for 50–60% of all cholangiocarcinomas [1]. Patients usually present with the sequelae of biliary obstruction, such as painless jaundice and intrahepatic biliary dilatation on diagnostic imaging [2]. Patients and clinicians are confronted with many challenges from initial presentation until the definitive treatment. Obstacles faced range from confirming malignancy to biliary drainage with the risk of subsequent cholangitis. The majority of patients are eventually not amenable to surgery because of locally advanced or metastatic disease at the time of presentation [3]. This leaves the possibility of resection reserved for less than half of all patients (33.0–41.3%) [2,3,4].
Realistically, cure is rare, and only possible after extrahepatic bile duct resection in combination with partial hepatectomy with negative resection margins and locoregional lymphadenectomy. Over the past decades, significant improvement in long-term survival after surgery has been observed for patients diagnosed with pCCA that can be attributed to advances in surgical management [5,6,7]. Patients undergoing curative-intent surgery for pCCA have a median overall survival of 19 to 39 months, with 20–47% 5-year survival rates [8]. Due to the aggressive biology of the disease, survival rates remain poor with early hematogenous, lymphatic, and perineural dissemination of cancer cells [9,10,11].
Although several perioperative outcome parameters after curative-intent surgery for pCCA have been associated with long-term survival, a definition of cure after resection of pCCA is lacking. For colorectal liver metastases, a more pragmatic definition of cure is set at 10-year disease-free survival (DFS) [12]. This study aimed to determine the cure rate defined as 10-year overall survival (OS) with no evidence of recurrence at last follow-up after resection of pCCA and to identify clinicopathological factors that preclude cure in a large international multicenter cohort.

A total of 22 centers worldwide included all consecutive resections for pathologically confirmed pCCA after the year 2000. The period of inclusion varied across centers. For the aims of this study, patients who underwent surgery between 2000 and 2009 were selected, to ensure that a total follow-up of at least 10 years could potentially be observed. pCCA was defined as a biliary tumor originating at the hepatic duct confluence between the segmental bile ducts and cystic duct. Using a standardized and anonymized data file, each center comprised its retrospective data series. Patients were excluded in case they had only undergone explorative laparotomy or liver transplantation. Ethical approval was waived by the Institutional Medical Ethics Committee of the Amsterdam University Medical Center.

Work-up and perioperative management, such as patient selection for portal vein embolization (PVE) and biliary drainage, differed across centers due to the multicenter set-up. Patient selection for PVE and biliary drainage, therefore, differed between centers. Basically, most patients planned for large liver resections underwent preoperative, endoscopic, or transhepatic biliary drainage of at least the future liver remnant (FLR). Approaches to portal vein reconstruction vary across centers, as some perform it routinely whereas others perform it on demand.

The definition of cure was 10-year overall survival with no evidence of recurrence at last follow up. OS was defined as the time elapsed between surgical resection and death of disease or last follow-up. OS is a more reliable and more objectively determinable endpoint than disease-specific survival (DSS).
Preoperative cholangitis was characterized as fever and leukocytosis requiring biliary drainage [13,14]. Resection of at three or more Couinaud liver segments was considered a major liver resection. Pathology records describing R0 resection margins were defined as tumor-free margins, indicating no evidence of tumor cells at any of the reported resection margins of the resected specimen. The absence of cancer cells in regional lymph nodes was indicated as N0 (or ‘negative’) nodal status. N1 (or ‘positive’) nodal status indicates that the cancer has spread to 1 or more lymph nodes.

Survival rates were calculated using the Kaplan–Meier method. Differences in patient and disease characteristics between OS groups (<2 years, 2–5 years, 5–10 years, >10 years) were presented. Patients who were lost to follow-up prior to 10 years were excluded from the respective survival cohorts. After extended follow-up, the proportional hazards assumption of Cox proportional hazard analyses fails. We, therefore, employed a semi-parametric mixture cure model, in order to predict long-term survivors [12]. Truly cured patients from the cohort were selected and compared to the predicted cured patients using the semi-parametric mixture cure model. Categorical variables were described as counts and percentages. p < 0.05 was considered significant.

A median of 80 (range: 25–115) resections for pCCA per center were included. The baseline and (pre)operative characteristics across different survival cohorts are presented in Table 1. A total of 1667 patients made up the total cohort. From these, 460 patients resected between 2000 and 2009 were enrolled in the study population and underwent combined liver and biliary resection for histopathologically confirmed pCCA.
The majority of patients presented with jaundice (n = 318, 80%), with the consequent need for preoperative drainage in most patients (n = 381, 83%). A total of 77 (18%) patients suffered from preoperative cholangitis. Eighty patients (17%) underwent PVE prior to surgical resection. Intraoperative vascular reconstruction was performed more frequently for the portal vein (n = 138, 30%) when compared to hepatic artery reconstruction (n = 10, 2%). Pancreatoduodenectomy was performed in 5 patients (1%). Tumor-free margins were microscopically confirmed in 304 (67%) patients. In 214 (48%) patients, the tumor was classified as T3 or T4 according to the AJCC staging system (7th edition) [15]. Positive lymph nodes were found in 170 (38%) patients. Perineural invasion was present in 241 patients (72%). Tumor differentiation was poor in 99 patients (23%).

A total of 29 patients (6%) reached 10-year OS. The most important prognostic factors of these patients are summarized in Supplementary Table S1. Among the 10-year survivors, the majority was still alive without evidence of disease (n = 20, 69%), five patients (17%) died without evidence of disease after 10 years. Four patients (14%) developed recurrence within 10 years and were alive with disease 10 years after their initial resection. None of these patients underwent pancreatoduodenectomy or a portal vein or hepatic artery reconstruction. Upon final pathology, all four patients had negative resections margins, one patient had positive lymph nodes, three patients had perineural invasion, and tumor differentiation was moderate for all four.

Despite considerable improvements made in surgical technique and perioperative management, long-term survival after surgery for pCCA remains poor. The invasive biology of pCCA challenges the more or less exhausted surgical resources to improve locoregional control. Identification of unfavorable prognostic factors is unlikely to deny a patient a resection, however, will rather be used to improve patient counseling and determine the need for (neo) adjuvant therapy and close long-term surveillance.

The following are available online at https://www.mdpi.com/article/10.3390/cancers13246260/s1, Table S1: provides an overview of the clinicopathological factors of the 29 patients that reached 10-year overall survival.

Ethical review and approval were waived for this study, due to the retrospective design of the study and all the procedures being performed were part of the routine care.

Patient consent was waived because the majority of patients were deceased.

Data was provided by the Perihilar Cholangiocarcinoma Collaboration Group. The data presented in this study are available on request from the corresponding author. 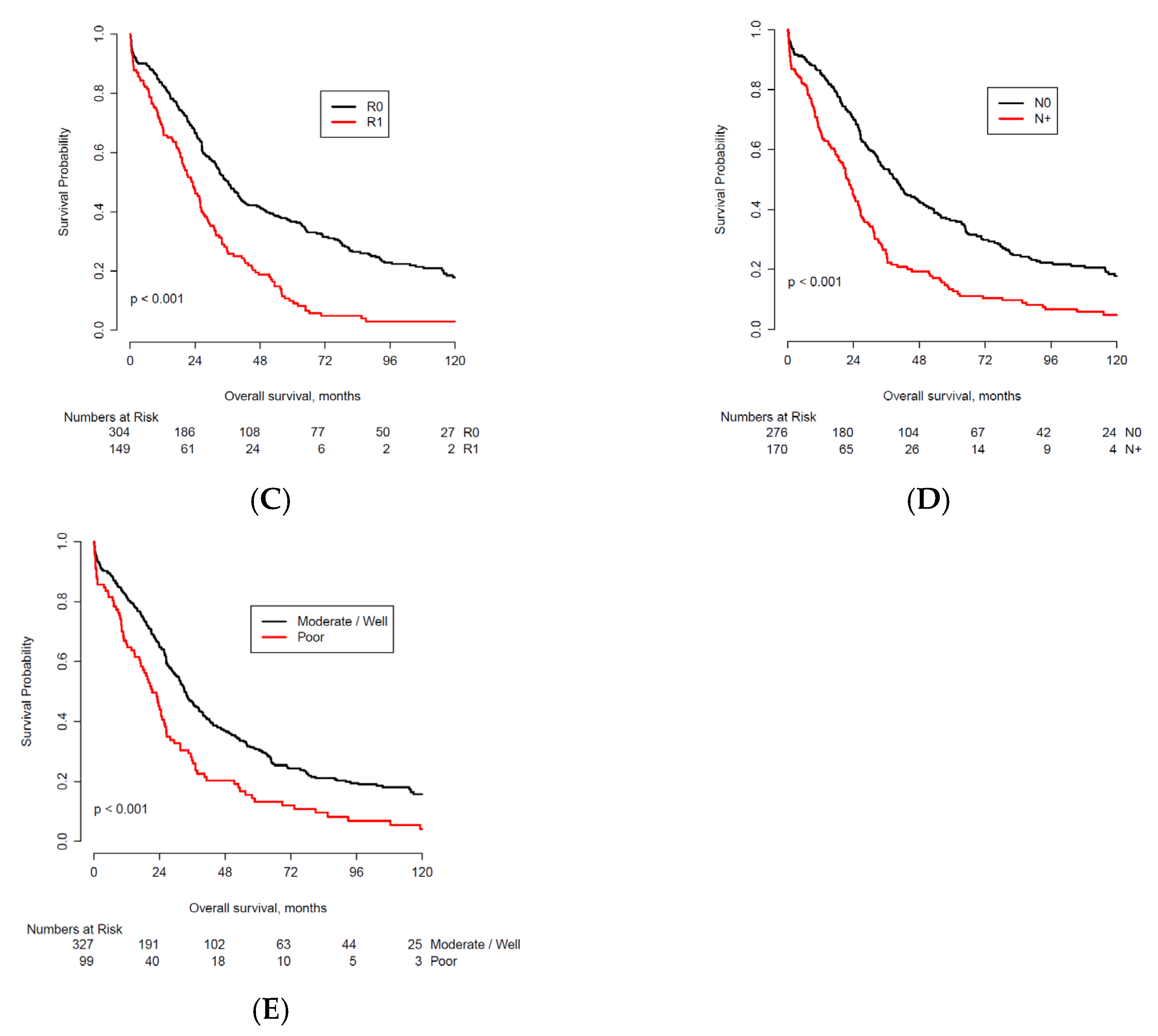