Do BARD1 Mutations Confer an Elevated Risk of Prostate Cancer?
Next Article in Special Issue

Selective internal radiation therapy (SIRT) is a treatment for patients with liver cancer that involves the injection of radioactive microspheres into the liver artery. For a successful treatment, it is important that tumours are adequately covered with these microspheres; however, there is currently no method to assess this intraoperatively. As holmium microspheres are paramagnetic, MRI can be used to visualize the holmium deposition directly after administration, and possibly to adapt the treatment if necessary. In order to exploit this advantage and provide a personally optimized approach to SIRT, the administration could ideally be performed within a clinical MRI scanner. It is, however, unclear whether all materials (catheters, administration device) used during the procedure are safe for use in the MRI suite. Additionally, we explore the capability of MRI to visualize the microspheres in near real-time during injection, which would be a requirement for successful MRI-guided treatment. We further illustrate our findings with an initial patient case.

Selective internal radiation therapy (SIRT) is a treatment modality for liver tumours during which radioactive microspheres are injected into the hepatic arterial tree. Holmium-166 (166Ho) microspheres used for SIRT can be visualized and quantified with MRI, potentially allowing for MRI guidance during SIRT. The purpose of this study was to investigate the MRI compatibility of two angiography catheters and a microcatheter typically used for SIRT, and to explore the detectability of 166Ho microspheres in a flow phantom using near real-time MRI. MR safety tests were performed at a 3 T MRI system according to American Society for Testing of Materials standard test methods. To assess the near real-time detectability of 166Ho microspheres, a flow phantom was placed in the MRI bore and perfused using a peristaltic pump, simulating the flow in the hepatic artery. Dynamic MR imaging was performed using a 2D FLASH sequence during injection of different concentrations of 166Ho microspheres. In the safety assessment, no significant heating (ΔTmax 0.7 °C) was found in any catheter, and no magnetic interaction was found in two out of three of the used catheters. Near real-time MRI visualization of 166Ho microsphere administration was feasible and depended on holmium concentration and vascular flow speed. Finally, we demonstrate preliminary imaging examples on the in vivo catheter visibility and near real-time imaging during 166Ho microsphere administration in an initial patient case treated with SIRT in a clinical 3 T MRI. These results support additional research to establish the feasibility and safety of this procedure in vivo and enable the further development of a personalized MRI-guided approach to SIRT. View Full-Text
Keywords: SIRT; radioembolization; holmium; MRI; safety; compatible; conditional; angiography; catheter SIRT; radioembolization; holmium; MRI; safety; compatible; conditional; angiography; catheter
►▼ Show Figures 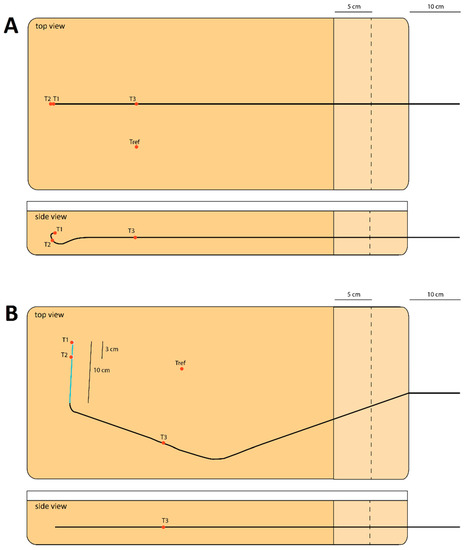