Current therapies for recurrent and metastatic squamous cell carcinomas (SCCs) are associated with poor patient outcomes, and options for later lines of treatment are very limited. In cases where single-agent therapy may be insufficient to eradicate the tumor, thus allowing outgrowth of resistant cells, a well-chosen combination of therapeutic agents may enable improved outcomes. Tipifarnib, a farnesyl transferase inhibitor, is a small molecule drug candidate that has demonstrated promising clinical activity in HRAS-mutant head and neck squamous cell carcinoma (HNSCC). New molecular analyses suggest that HRAS may also be important in some HNSCC cases where it is not mutated, which might allow tipifarnib to be active in a broader population of HNSCC patients when used in combination with other agents such as cisplatin, cetuximab, or alpelisib. Other non-HRAS oncoproteins that can also be blocked by tipifarnib may offer alternative approaches to combination regimens for SCCs.

Current therapies for recurrent and metastatic SCC are associated with poor outcomes, and options for later lines of treatment are limited. Insights into potential therapeutic targets, as well as mechanisms of resistance to available therapies, have begun to be elucidated, creating the basis for exploration of combination approaches to drive better patient outcomes. Tipifarnib, a farnesyl transferase inhibitor (FTI), is a small molecule drug that has demonstrated encouraging clinical activity in a genetically-defined subset of head and neck squamous cell carcinoma (HNSCC)–specifically, tumors that express a mutation in the HRAS protooncogene. More recently, bioinformatic analyses and results from patient-derived xenograft modeling indicate that HRAS pathway dependency may extend to a broader subpopulation of SCCs beyond HRAS mutants in the context of combination with agents such as cisplatin, cetuximab, or alpelisib. In addition, tipifarnib can also inactivate additional farnesylated proteins implicated in resistance to approved therapies, including immunotherapies, through a variety of distinct mechanisms, suggesting that tipifarnib could serve as an anchor for combination regimens in SCCs and other tumor types.
Keywords:
HNSCC; farnesyl transferase; tipifarnib; combination regimen

2. HRAS Dependency: Role of Unmutated HRAS in Progression and Chemoresistance in HNSCC

3. Combination Approaches with FTIs in SCCs and Other Solid Tumors

In summary, preclinical murine studies, in-depth oncogenic analyses, and ongoing clinical investigation in patients with mutant HRAS tumors may support tipifarnib as a novel precision therapeutic approach for HNSCC and other cancers. Recent advances in genomic and cellular studies have led to the identification of HRAS mutations as drivers of tumor growth in a subset of HNSCC. These mutations in an oncogene that is uniquely sensitive to inhibition of farnesylation appear to sensitize the tumors to farnesyl transferase inhibitors such as tipifarnib, as supported by animal models and ongoing clinical trials. In addition, preclinical studies in PDX models overexpressing HRAS have demonstrated that tipifarnib sensitizes these tumors to several drugs in clinical use in SCCs, suggesting that the benefit of tipifarnib may be extended to include those patients with HRAS overexpressing tumors when used in combination with drugs such as cetuximab, alpelisib, and cisplatin. Furthermore, inhibition of other farnesylated proteins, such as RHEB and RHOB, may help overcome resistance to standard therapies in SCCs and additional tumor types.

This was supported by research funding from Kura Oncology.

All authors are full-time employees of Kura Oncology. 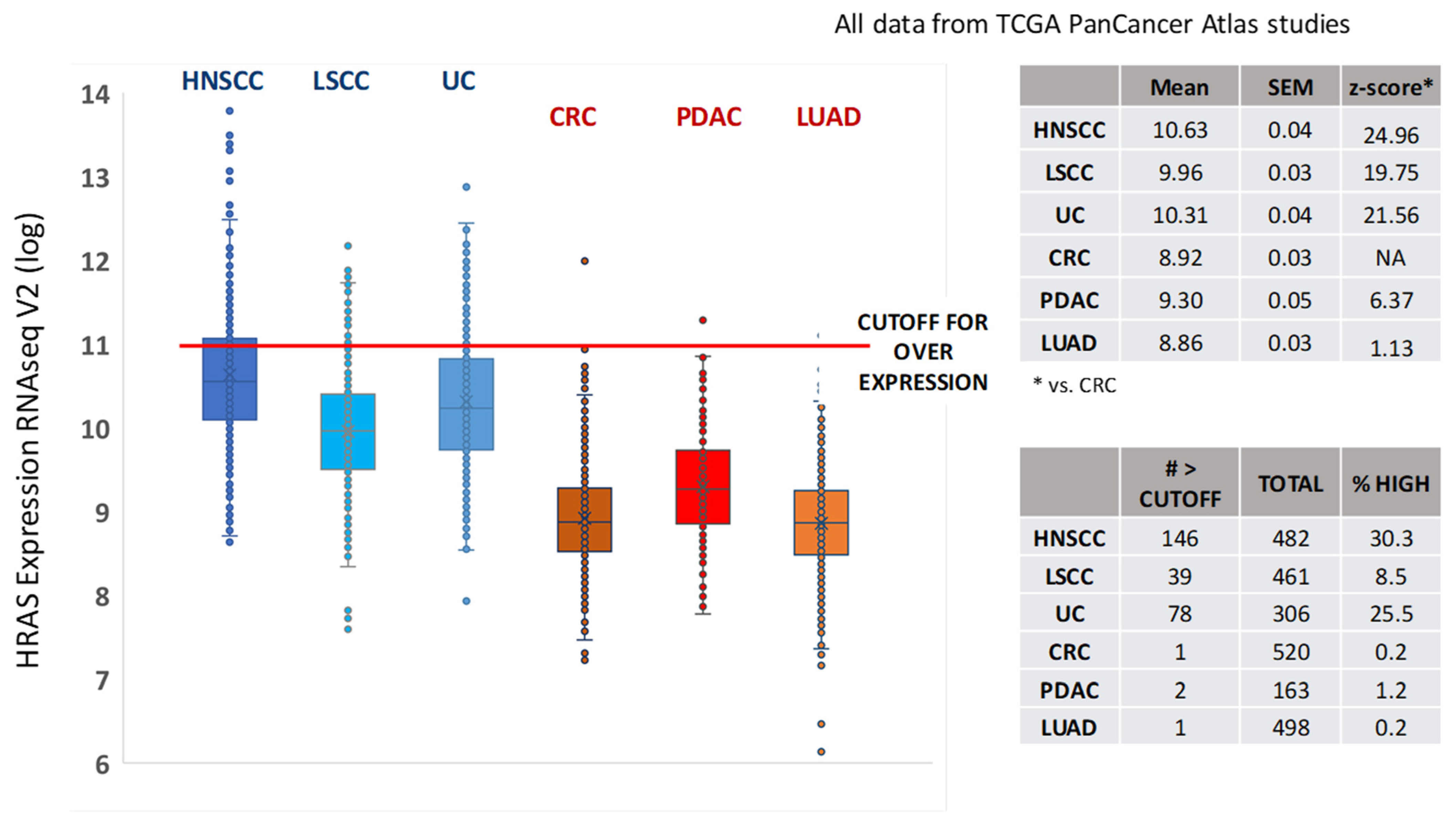 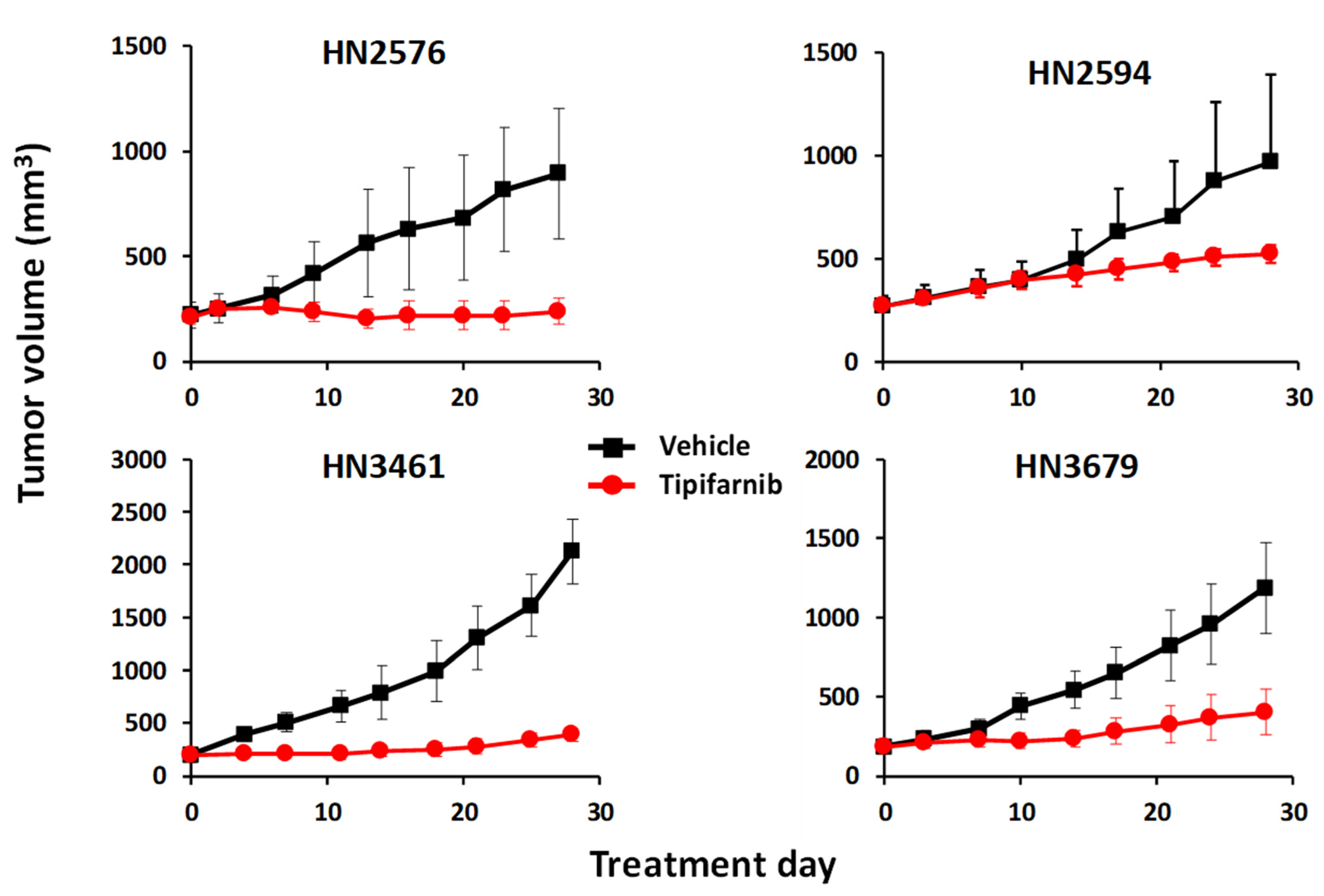